My Writing Progress Report for November 2014

AdSense earnings were £3.36 from HubPages, Seekyt and a niche site project, up substantially from the previous month, with HubPages performing the poorest. AdSense income as a whole is still trending down, with YouTube continuing to perform the best. The main earner on YouTube is still making money, although the secondary videos for a yearly event will probably now not do anything until next autumn.InfoBarrel earnings were $17.03 from Tier 1 and Tier 2 ads, up from the previous month. There was a rather poor performance from Tier 2 ads - in fact, probably the worst performance to date, with Tier 2 only two thirds of the previous month despite more impressions during one of the best shopping, and, therefore advertising, months of the year. Amazon clicks are still going up, and there was another sale.Nothing new was published again on Writedge and earnings were apparently $1.55 (I'm still uncertain as to the accuracy of these and Daily Two Cents stats, as it's been mentioned that there are continuing problems with the counter).33 new posts, including the one longer one mentioned earlier, were published on Daily Two Cents and earnings were $17.18.Expertscolumn earned nothing again. RedGage and Zujava are still either uncertain or not worth bothering with.A quick word about tsu. I've already gone into more detail into tsu, and it's not really a writing site - although you could write there - but a social media site. It did earn $0.02 in November though, which is more than I've earned directly from all the other social media sites combined.

This was the best month ever for Amazon in all the many years I've been an affiliate, with $28.51 earned from Amazon US and £0.39 from Amazon UK. The majority of the sales were from the niche site I've been doing with chezfat, with one from InfoBarrel. I went up to the 6% referral rate for only the second time ever and, with 28 items shipped, was only three items away from the 6.5% rate. I actually sold enough to reach that - 44 items - but because the last two days of the month were the weekend, they weren't shipped. Still, they have given a significant boost to next month's item sales, reaching 6% already. This may still be quite low compared to how some have done, but it's my best performance to date from my personal Amazon Affiliate accounts. Niche sites are a really good idea - especially as they boosted AdSense too.

Two new Hubs were publish on HubPages during the month. Earnings from the HubPages Ad Program from the 131 Hubs across the two accounts were $1.52, down quite a lot from the previous month. There have been no Amazon sales in some time, despite various former Squidoo lenses being quite successful at generating sales to Squidoo's own account when they were on that site. There are still plenty of former lenses that need converting, too.

The total earned from Bubblews in November was $145.81, which was way down from last month. This was expected, as a number of payments received in October were outstanding ones from earlier. I made 159 posts on Bubblews during the month including the three mentioned earlier.Earnings continue to fall, as the traffic to the site does. During the 30 days I had to wait before I could make my latest payment request, I earned $112 - which is far lower than it used to be. The next period is going to be even lower still from the looks of things. It went from 12 days required to hit the $50 threshold after the changes to 18. I believe a lot of genuine spammers have been eliminated from the site, but they also seem to have lost quite a few regular posters; they haven't been deleted, they simply aren't active. I don't think hiding views is helping either; it certainly isn't encouraging me to post as much there, because I can't track the success of certain articles any longer. 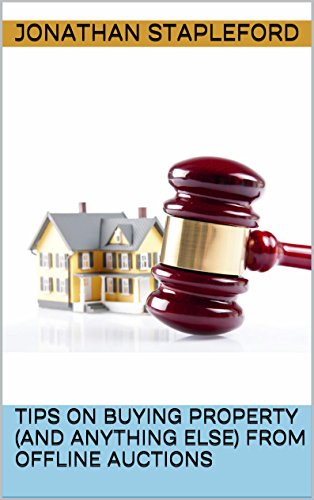 Tips on Buying Property (and Anything Else) from Offline Auctions Amazon Price: Buy Now(price as of Mar 27, 2016)

No progress with ebooks at all again in November, with no sales and no new books published.

I've started thinking about what I want to accomplish for the next year, rather than just in December. I definitely want to get more Kindle ebooks and RPG PDFs published during the year, and I plan to set up some niche sites for Amazon revenue, and maybe some other affiliate programmes too. Even though this is one of the best times of year for Amazon sales, it has shown the sort of potential that's available here, if you can come up with some niches.AdSense revenue has dropped a lot over the past few years - I used to get a payment every month - so maybe the niche sites will help with that. The affiliate revenue would then be invested into ebooks of both types, for those I don't write myself or need other help with, because I think the long term potential of ebooks is rather more stable than sites of any type - my own or revenue sharing - even though there hasn't been much in the way of ebook sales as yet. In some cases, the more ebooks that are published, the more money is likely to be made, as there will be an existing customer list and more chance for cross-promotion. Increasing the number of potential sources of income is definitely a good idea, as the recent deterioration in Bubblews income has shown.