My Writing Progress Report for October 2014

During October I published 13 articles on InfoBarrel (11,057 words), 4 Hubs on HubPages (3,868 words), 2 Bubblews posts (759 words), 1 blog post (513 words) and 1 article on a project I'm doing with chezfat (1,101 words).The total number of words written in October was 21,061, excluding any smaller posts, up from September. Three articles were featured on InfoBarrel during October, Movie Review: Before I Go to Sleep, Movie Review: Dracula Untold and Movie Review: Gone Girl.

AdSense earnings were £0.45 from Seekyt, HubPages, Wizzley and that chezfat project, down from the previous month. AdSense income as a whole was up, but this was solely down to YouTube videos, as the primary earner for those is popular at this time of the year, and there were a bunch of secondary ones related to an annual event.InfoBarrel earnings were $15.87 from Tier 1 and Tier 2 ads, up slightly from the previous month. There was also one Amazon sale made through the site. Amazon clicks are trending upwards, but earnings aren't so much as yet.Daily Two Cents had thirty one new short posts published, and earned $16.90 (I think), up from the previous month. This was probably substantially up from the previous month.Nothing new was again published on Writedge, and earnings were, possibly, $0.50. Like Daily Two Cents, I'm unsure as to the accuracy of the figures, as there is a known problem.Expetscolumn earned $0.01 in October.RedGage, I still don't know what's going on with this site regarding earnings. I may be earning; I may not. I definitely don't know how well the two articles I did post there are doing.Zujava. Hmph.Amazon earnings were $1.58 from InfoBarrel and my chezfat project. This makes the sixth month in a row where sales have been made, a new record, the previous being five. Now, if only more sales were being made, or if sales were happening on a daily basis. Still things to work on with Amazon.

Squidoo is now shut down, but I still got two payments out from it, of $6.90 and $5.76. This may the final earnings ever from Squidoo now.

An above average month with regards to publishing on HubPages, with four new Hubs published. The total earned from the HubPages Ad Program was $2.93 from the 129 Hubs across the two accounts. This was down from the previous month; traffic to the transferred Hubs looks like it's dropping. They are still earning more on average than the original ones, though. There wasn't a single Amazon sale made; previously, on Squidoo, I would have expected to see a few sales during the month. Possibly, this could be due to using my own Amazon account rather than that belonging to HubPages, as on Squidoo I used Squidoo's account. If you are only getting one sale a week, there's a good chance you're going to miss it when it's down to rotation rather than being split.I am still progressing, slowly, through the transferred lenses. I need to check when the deadline is to get them sorted, as I'm not even halfway through yet. The majority need quite a bit of work, fixing how they look, updating products and replacing modules.

The total earned from Bubblews in October was $486.58 in cleared and pending payments. The amount earned is higher, much higher in fact, than last month, due to catching up on missed payments. Earnings will be substantially less in the future, due to various changes made during the month. Bubblews has, not unexpectedly, finally decreased the amount earned from certain activities. Views are now, apparently, dependent on global advertising rates, which does make sense, and it looks like social shares no longer earn anything directly. In addition, you can now only make one redemption request every 30 days, assuming that you are over the $50 threshold. Since the changes, I went from earning $50 every 3-5 days to needing 12 days to make it the first time afterwards.I had been tracking a collection of Bubblews articles for some time, just over two years in fact, but I no longer have that ability. Bubblews have started hiding views on articles, which now makes it impossible to see what is generating traffic. The only possible measurements are now all internal, which I think may be a mistake in the long run. I believe attracting external traffic would be better and, seeing as you now can't see if you are managing that, there is no real incentive to try.

Tips for Improving your Home's Chances of Selling Amazon Price: Buy Now(price as of Dec 9, 2014)

There is nothing new to report for ebooks in October. There were no new books published and, unfortunately, no sales either. Some progress has been done on writing a few in progress works, but nothing else.

I really would like to get at least one ebook, of whatever type, published in November. I'm struggling with the last 10% or so of the Kindle ebook I'm currently working on myself and, although I have been writing more RPG supplements (although I haven't finished any for a while, rather several that are in progress of various degrees), I do have a number queued up that need "prettying" up and laying out properly - which needs software and art I don't have myself. Other than that, there are still the transferred lenses to work on, and I may have an idea for a site, or maybe an article series, I'm not sure which yet. It could be either a series of posts of a few hundred words or so each, or a much smaller number of long posts. Actually, it could be both. 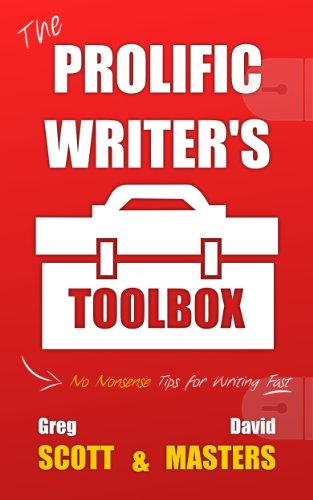 The Prolific Writer's Toolbox: No Nonsense Tips For Writing Fast Amazon Price: Buy Now(price as of Dec 9, 2014)
Next >> I Could Write a Book About That! - Researching and Writing a Non-fiction Book