I admit that I am a little bit late to the party here. I've known about the PC version of Naruto Shippuden: Ultimate Ninja Storm 3 Full Burst since it was first released on Steam a couple of months ago, but I waited until it dropped down in price or at least until it's been patched for bugs (very few games these days are released without some sort of problem that needs to be patched first).

Now I have my own copy, and I've been playing it for the entire week or so. I spent a few hours playing online, but the bulk of my total playtime is spent on the single player. I unlocked all the characters and finished the storyline just to ensure that I'm not missing anything (yes, I took the time to beat that damn Sage Kabuto and his multiple HP bars)

Sadly, the game suffers from a poor port job, as it’s a bit of a lottery with regard to how smooth it will run on your system (there are people with non-gaming laptops who can run it fine, while there are people with high end gaming rigs that experience slow motion gameplay) If you’re having problems with the performance, there’s a weird fix that’s been discovered by users[1].

When you get past the technical quirks, you’ll find that Naruto Shippuden: Ultimate Ninja Storm 3 Full Burst is easily one of the best videogame representations of the Naruto franchise right now (at least, until Storm Revolution comes out). The graphics do their job well in making you feel like you’re watching the anime, compared to previous cel-shaded efforts. In fact, if you’re lucky enough to be able to max out the resolution with Super Sampling enabled, it’s going to look even better than the anime.

The storyline is worth it, as it covers everything from the start of Shippuden (post-timeskip) all the way to the Ninja War. A few details are changed in the game, mostly to ensure that it doesn’t spoil the current story arc (and because the current story arc isn’t finished yet, so they had to change stuff to give the game an ending). With the up-to-date storyline, the roster also keeps up. It has everything from the pre-Shippuden versions of the characters (Young Naruto and crew) all the way to the Great Ninja War, with the Edo Tensei Madara, the Edo Tensei Jinchuurikis, and even a Nine Tails Chakra mode Naruto. You also have the aforementioned Sage Kabuto, who works as one of the main bosses of the game.

Gameplay-wise, most people would dismiss Full Burst as too simplistic – after all, you only have one button for attacks, one for kunais/shurikens, another for Chakra burst, and another one for jump. The shoulders handle blocks and teleports. But once you play it for a while, you’ll realize that the game has complex combat mechanics. It’s just that the complexity isn’t in how you pull off moves, but how you use those moves. There are frame-dependent cancels and move priorities that make combat dependent on timing, strategy, and knowing the moves of the characters.

There’s also a lot of fanservice in the movesets. The moves look very, very impressive but unlike previous iterations of the game, the execution no longer takes too much time (this was a common problem with past games, where the super moves look impressive but take too much time that it breaks the flow of the game). There are also a bunch of transformations that range from awakenings like the nine tails chakra mode and the Susano’os, to tailed beast transformations. It works more than just fanservice, though, as the dynamics of the bout change once one of the characters transforms and gains increased speed, strength, or both.

It’s expected for fighting games like this to have a lot of replay value, as there’s usually a ton of unlocks and you’ll be enjoying just wiping the floor with CPU-controlled opponents long after you’ve finished the story mode. The same is true for Naruto Shippuden: Ultimate Ninja Storm 3 Full Burst, with a story mode that can be finished in less than a day’s worth of nonstop play, but with several dozen characters that can be unlocked (the total number of playable characters is around 80!), so you’ll be spending quite some time with the game before you can say that you’ve seen everything it has to offer. There’s also online multiplayer, in case you want to fight with people from across the globe. But bear in mind that their netcode is laggy for now, so wait for a patch first if you’re one of the unlucky few who experience lags online.

Conclusion: Buy or Not?

As with most games, the answer to this depends on a number of factors. If you already have the previous iterations of the Ultimate Ninja Storm franchise on the consoles, then Full Burst isn’t going to be worth it full price. Which is fine because it can be bought as an upgrade for a reduced price. If this is your first Naruto game, or if the last ones you’ve played were from the Wii or older, then definitely check it out as it’s easily one of the best Naruto games out right now, even with all the bugs and glitches. 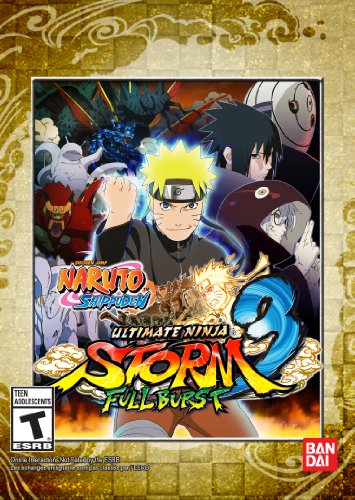