Naruto Shippuden: Ultimate Ninja Storm 3 picks up where the previous game left off in the series. It is also considered to be the finest game in the series yet. This incarnation of the game goes further than any previous Naruto game by taking gamers past the Pain Arc and onwards into the Fourth Ninja World War. However, is this third in the series a fantastic play through or do Naruto fans have their blinders on because they are entering into epic content from the anime / manga?

While Ninja Storm 3 is said to take place after the Pain fight, the game starts out in the long teased fight between the Konoha ninja village, the third and fourth Hokage, and the Nine-Tailed Fox Demon Kyuubi. If there is one thing this game does well, it is flair. There is no shortage of flair in the fight between these powerful ninjas and the fox demon. it has you hopping from roof top to roof top fighting it while it ravages your city. The story then leaps forward to Naruto as he prepares to go to the Kage summit. However, throughout the game it will continue to flash back to the event surrounding Naruto's birth and the Kyuubi being sealed inside him.

If you are not a fan of the Naruto anime, manga, or previous games then you probably have no idea what I just said. This third installment is not really meant for gamers who just feel like jumping into the series with no prior knowledge. The story mode, at least, is only for fans but the multiplayer transcends barriers.

With over 80 characters to choose from there is no shortages of fights to have. However, one downside from the character selection is that they have both the characters when they were kids and after they have grown up. Who would want to play young Hinata when you could play Hinata with boobs? They also have characters like Naruto and Sasuke on there multiple times, which is understandable as they would be overpowered if you gave them all their moves on one character. However, a cool tidbit is that you can play as all of the tailed beasts, not just Killer Bee and Naruto.

Like the previous games, UNS3 has online play which is easy to just jump right in and play. Though like with any online play in fighting games, there are always those tools that pick Sage mode Naruto and spam rasengan on you. However, that is a gripe about humanity and not this game.

The fighting as compared to UNS2 seems to have gotten sadly easier. The same buttons that perform moves on one character, do it with all the characters so once you know what every button combination does, you are decent with every character. Except Ino. Ino is just terrible. This makes it easier for fans or new gamers to learn. However, because the combat is so fast paced, if you have decent reflexes you will be able to outmatch just about anyone. It seems like the key to this game is just run around until you have enough chakra gathered to do your ultimate.

The Ultimate Ninja Storm series has always been about really flashy ninjutsu moves and this game is no different, except it is significantly flashier. Fans of the Naruto universe will be titillated by the flashy ultimate's and various other jutsus of each character, however there is little substance. Since the game is so easy to pick up, once you have seen everything these is to see in the versus mode, it can get a bit boring.

That is what a story mode is for, right? To entertain once the versus gets boring. The story mode is also where you will unlock a lot of the characters, though some can only be unlocked by reaching large amounts of ryo, in game currency you earn for each fight. The upside if you are a fan of Naruto is that the story mode stays fairly true to the show and manga. The downside to the story mode is that there are so many long cut scenes. Sometimes they are action scenes that are visually stunning and can spawn a QTE event just to keep you busy, but most of them are exposition. You know those boring chapters of the manga where it is just all talking? It feels a lot like that at times. 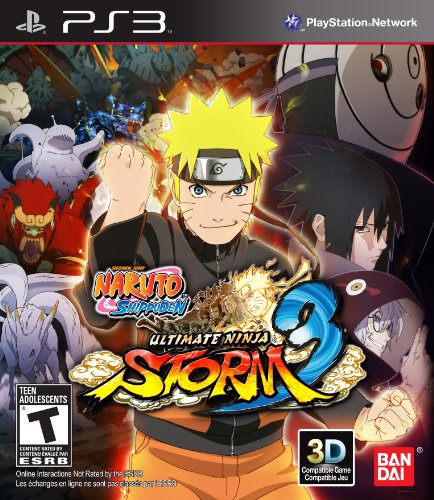 You can thankfully skip the cut scenes it you get too bored and jump right into the action, but the story is so integral to the 'story' mode that what is the point of playing if you do not watch them? Throughout the story mode you will be presented with so-called 'ultimate decisions' which will alter the story based on what you pick. However, it matters very little what you pick as the story always ends up in the same place. Sure, if you choose to deviate from the story you may get a little extra exposition but it will always be a minor story deviation.

In the story mode when there isn't a cut scene or any action, you are presented with the most linear free roam I have ever seen. You get to walk around various scenery and talk to people, pick up money or items off the ground, and visit shops that really have nothing you want. These free roam sessions, to me, just seem utterly pointless as you have nowhere to go but to the next cut scene or battle. However, I suppose if you love your items, they were needed.

Overall, if you are a fan of the Ultimate Ninja Storm series, you will not be disappointed by this game. The story mode is essentially just like watching the anime, except for less blood and they seemed to have toned it down a fair bit. However, people really buy fighting games for the versus. The online play is fun if you play people that actually try to fight without cheating. However, the local versus can be loads of fun to play with another Naruto fan. With all of the interesting and powerful characters they placed in this game, you can spend hours upon hours just messing around are reenacting powerful legendary fights. Or legendarily unfair fights like Ino versus the 4th Raikage.