If you haven't heard of Nest, then it's about time you have. The company focusses on redesigning familiar home products and making them fresh, new, and higher tech.

From the new Nest fire (& carbon monoxide) alarm to the Nest thermostat, products are smooth, simply and elegantly designed (so you won't be too surprised to find they are designed by a group of major ex 'Apple' employees). Why might you want to invest in a new product such as these? Nest's thermostat is by far the company's most successful product, but for many people the idea of replacing a traditional home thermostat has never entered their heads.

A Nest intelligent thermostat is a little different though. Rather than simply programming a traditional thermostat and leaving it running, maybe remembering to turn it off when you go on holiday, maybe not, a Nest thermostat will learn your schedule. After answering a few questions the thermostat will then begin learning how temperatures change around your home, indicating when you are and aren't there, and will programme itself accordingly. It can even be controlled through an app on your phone, just in case you want to warm things up before coming home unexpectedly. 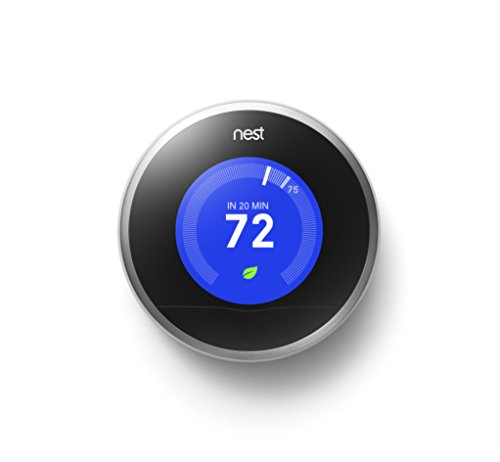 One common issue that many consumers have with the second generation thermostat is its lack of compatibility with other household electronics. With so many people these days turning to remotely controlled electronics whether thermostats, alarm systems or other devices, being able to control all these things from one dashboard would be more than convenient. Look for added compatibility with other devices in a third generation Nest thermostat.

Currently, the second generation thermostat is pretty intuitive and is capable of analysing your use and schedule in order to program itself. However, you still need to answer a few questions on installation, and it will take a couple of weeks before the thermostat knows your schedule well enough to auto program properly. Expect this learning time to decrease in third generation models as more powerful sensors and analysis software make the thermostat learn faster.

The second generation thermostat connects to your WiFi network, and many customers have issues with the device dropping Internet connectivity and therefore losing certain functions. A great new feature on a third generation system would be WiFi back up, such as is often found on alarm system. Generally this requires having an emergency 3G card to act as back up should the regular WiFi connection fail. This gives you more reliability, and is a relatively small change to make on an existing model.

Nest does advertise its second generation thermostat as easy to install, saying that four out of five people can install it themselves in less than thirty minutes. According to many customer reviews though, this might not be exactly true. There have been installation issues, particularly amongst those less technically inclined. A smarter and easier installation system, closer to a computer “plug and play” system is what is really necessary on the third generation thermostat.

A more precise temperature control rather + or - 3 degrees, they could narrow it down to 2 or even 1 like the Honeywell models. Perhaps, it could give you a quicker reading and display of relevant info (humidity, temp etc.) too & as said an even simpler interace to work the gas heat etc. They might look into email, sms alerts too, if anything were to go wrong.

Finally, it would be nice to see a hold function added to a third generation model. This would allow you to tell the thermostat a certain temperature that you want to keep for an indefinite amount of time, the system then heating or cooling appropriately to keep that temperature. The current second generation model does not allow you to do this, and for many customers used to dealing with a traditional thermostat this is a serious draw back.

Is there anything else you would like to see with the 3rd generation nest thermostat? Let me know in the comments section just below.