J.Larson Check out my blog the Young Enviromentalist for more on what makes me tick & toc and follow along in my quest to live a more sustainable life http://youngenviromentalist.blogspot.com See you there
InfoBarrel is a writing platform for non-fiction, reference-based, informative content. Opinions expressed by InfoBarrel writers are their own.
InfoBarrel > Entertainment > Books & Comics

Rise up while you can...

Welcome to the world 26 years past when it should have ended. Mira Grant pulls you right down into the blood, guts and witty remarks that ensue in world after the dead come back to life and decide you look like lunch. This world is created by a Kellis-Amberlee virus a accidental combination of two different strains. One was designed to cure cancer the other to do away with the common cold. The good news is that the viruses do exactly what they are designed to do no one suffers from cancer and goodbye tissue paper because you will have the sniffles no more. But when you die or are exposed to the virus in its active state crash bang boom your a zombie and now someone is going to have to shoot you. Not only does the virus affect humans but all other forms of mammal as well. So not only do you have human zombies but also lions, tigers and bears (oh my) but lets not forget the moose, deer, big dogs, farm animals, you are starting to get the idea right.Welcome to a brave new scary as hell world where everything is trying to kill you.

Credit: personal photosomething very very stupid. You see in this world post Rising a.k.a zombie apocalypse, bloggers have become something of a reputable news outlet that many people look to for accurate information and exciting news. With that need out there you have two new types of blogger born, the Newsies and the Irwins. The Newsies are dedicated to getting the truth and the facts no matter what the cost and the Irwins in the spirit of the late Steve Irwin are more interested in doing stupid things and getting them on film. Anyways the story opens with Georgia and Shaun Mason two orphaned siblings out doing what they do best Shaun the Irwin poking a zombie with a stick and Georgia hunting for a good story. Well this simple outing quickly devolves into some serious zombie badness as they realize they are being hunted by a much larger pack/mob of zombies. Now you may be asking how zombies can "hunt", well in this world the more zombies that are together the smarter they are. Smart enough to set ambushes and coordinate just a little bit more than your average undead fellow.

As the book progress our resident bloggers get the chance of a lifetime to join to join a presidential campaign. What they expect is some boring politics and maybe a few interesting interviews. What they discover is a massive conspiracy that is bound and determined to get them killed and maybe just maybe it will succeed.

I'm not going to reveal to much because hey that would ruin the story.

This book picks up roughly 6 months after the events of the last one with Shaun dealing with the fallout of recent events. He is hearing voices in his head he no longer runs the news blog he

Credit: personal photostarted with his sister and he simply doesn't have the heart to be the goofy Irwin anymore. But despite the fact all he wants is out, the conspiracy he uncovered is not ready to let him go on his merry way. After a doctor who is supposed to be dead shows up at his door his life and his sanity swiftly goes down hill from there. With zombies and evil elements of the government dogging him every step of the way he and his team are forced to go underground to try and survive long enough to crack the conspiracy wide open. They uncover shocking new revelations and the return of a fallen comrade to the team brings so many new elements into play in the story.

The epic conclusion to the Newflesh Trilogy, Blackout does not disappoint. Follow Shaun as he

Credit: personal photo and his team desperately try to piece together the final parts the conspiracy that has controlled the world since the Rising. They discovery that people they though were old allies are not all that they seem. Though in the end the truth will prevail over lies and good will win over evil and yes the heroes do get to ride off into the sunset in their custom built van.

Over all I would have to say this is a great series. It takes you deep into a dark mysterious world and it doesn't let up right till the bitter end. Filled with appropriate amounts of gore, witty remarks, mad scientists anyone that is a fan of end of the world fiction will love this series. One thing I really like about it was the use of blog posts and diary entries as section headers. It provided a depth to the characters that really made them leap off the page and come alive.

(Ha Ha I sorta made a funny coming alive in a book about zombies).... (Ok so I guess I'm not that funny)

If I could sum this series in just four words they would be,

"Run for your life" 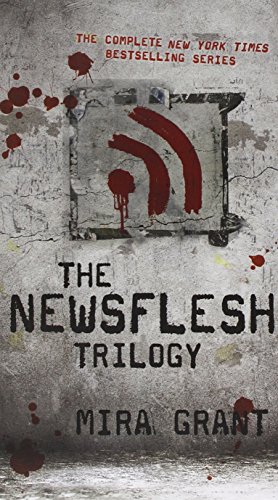