Ryan is co-founder of InfoBarrel.  You can follow him on Twitter @RyeMckenzie
InfoBarrel is a writing platform for non-fiction, reference-based, informative content. Opinions expressed by InfoBarrel writers are their own.
InfoBarrel > Health > Exercise & Fitness

What is a Nike FuelBand?

I learned about the Nike Fuel Band a few weeks after it's initial launch.  The Fuelband is a wrist band that looks similar to a Live Strong bracelet that keeps track of all your daily activity.  It has a built in screen that is comprised of a number of LED's that can tell you how much Nike Fuel you've earned, how many calories you've burned, how many steps you've taken and the current time.  The device also syncs with your phone, computer and Nike Plus account to keep track of your day to day activity.

After watching the YouTube videos I immediately wanted one.  Being able to get a rough idea how many calories I burn throughout the day was exactly what a fitness nerd like me wanted to know.

To help peak your interest, here is the original Nike commercial: 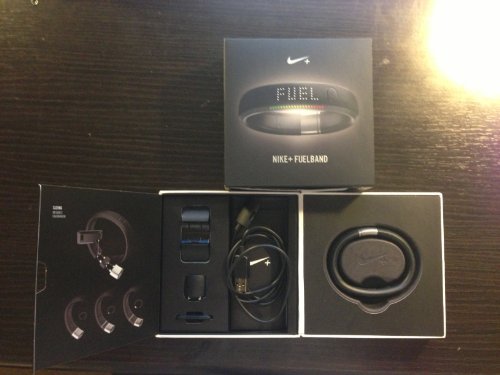 I'm a number junkie, I love knowing exactly how many calories I'm taking in, my macronutrient ratios and I'd always wanted to know how many calories I burn on a daily basis.  To feed my number addiction I typically weigh my food and prepare an entire days food in one sitting.  With that said, being able to track my energy expenditure was very VERY appealing to me.

The following video shows how the FuelBand tracks your energy consumption over the course of a day:

A Day in The Life with Nike FuelBand

Getting my grubby little mits on a Fuelband

Since Nike's releases have been extremely limited it has been very difficult to get yourself a NIke Fuelband.  From what I can find online, the initial batch went to celebrities/media outlets and the second batch sold out within minutes.  If you didn't get your hands on one in the second batch you could pay a hefty premium and grab one off eBay.  A friend picked one up off eBay, which got me even more interested, but I wanted to wait and get one from Nike.  I tweeted @NikeFuel and asked when the next batch would be out and to my surprise they tweeted me back with the next release date (Early April).

On launch date I went to Nike's site and was able to order a Fuelband.  To my surprise, they would not allow me to order one since I live in Canada.  No problem, I have access to a PO box in Washington.  So I continued filling out the order form, when I came across 'issue #2'.  Apparently Nike doesn't ship to Post Office boxes.

Fast forward about three weeks for all the shipping to go through and I finally had my brand new Shiny New Fuelband in my possession.

First Impressions of my Fuelband

The packaging was pretty slick, everything was nicely arranged so things didn't get all messy during shipping.  After all the excitement of shredding open the package, you can't use the FuelBand until you've charged it, luckily this only took about half an hour.

Contrary to a lot of issues I've read online I had almost no problems getting my Fuel band synced up to my computer or my iPhone.  My band fit perfectly without having to add the supplied extra link and was able to start burning 'fuel' right away. Once you've got it going there is a single button on the device that if you click will scroll through four different options; fuel, calories, steps and time.  The time is really convenient if you would rather where the band than a watch.

Down Sides to the Nike Fuel Band

There are two things about the Fuel Band that I wish were a little different.  While the device is able to be worn in the shower, it is not recommended to take the product swimming.  I don't personally go swimming all that much so it wasn't a deal breaker for me, however if I go on vacation, I wouldn't mind being able to wear my Fuel Band in the ocean or in the pool.

The other thing I would have liked to see in the Fuel Band would have been a heart rate monitor.  Mine fits very snug to my wrist, so I would think that tracking my pulse wouldn't have added too many extra dollars in electronics.  By tracking heart rate Nike would have had another variable to more accurately track activity levels. This would have improved their ability to measure fuel in activities that are more static like Yoga or Weight Lifting.

What is Nike Fuel?

Nike fuel is Nike's proprietary measurement of energy expenditure which is supposed to be a universal measurement.  For me personally I've noticed that three Nike Fuel points equates to about one calorie.  After using my Nike Fuel Band for about three weeks I find I pay attention to both the fuel as well as the calories.  It is definitely useful for comparing activity with friends, as if you have different height and weight your caloric expenditure will be way off.

You have a few options on how you sync your Fuelband with the Nike Plus web site.  First of all for people without iPhones, if you charge your Fuel Band off your computer using the USB cable, you can sync the fuel band via the software you installed when you initially set up your band.  I've only personally used this method once since I received mine as I'm currently an iPhone user.  If you have an iPhone you have the option to sync the device to your iPhone using Bluetooth.  Once synced you can install the free Fuelband application from the App Store and you are pretty much ready to go.  To sync, open up the iPhone app, hold down the button on your Fuelband until the word sync shows up on the display.  Make sure not to close the app until the Fuel Band has finished syncing or the sync won't complete.

The phone app is relatively basic, but so is the software for the desktop.

The Home page of the app shows you your fuel consumption for the day, calories, steps, distance travelled and total fuel burned all time.  The distance and total fuel are really the only extra things you can't see directly on the band.

The Activity tab is a graphical representation of your daily/weekly/monthly/annual fuel consumption.  Awesome for tracking periods of higher and lower activity.  You can also put notes in to track your daily mood and or injuries.

Right now this feature only works with others who are using iPhones as there is no Android app out just yet, but this feature allows you to see how much fuel you burn in comparison to your friends with iPhones. I currently only have two other friends with Fuel Band + iPhone combos right now.  This will be really neat once Fuel Bands start popping up in Canada and I can compete with my friends.  You can't opt out if you don't want your friends to see how lazy you are!

In the me tab you will be able to see your daily average fuel consumption, day active, awards you've received as well as changing settings.  From the settings you can do things like connect/discconect Facebook and Twitter or change your daily fuel goal.

Should you get a Nike Fuel Band?

If you love to track progress, keep track of your activity levels and get a rough idea of your caloric expenditure I would definitely recommend it.  I know there are definitely more accurate ways to measure calories, but they require stuff being strapped to your arm and are significantly less comfortable.  The Nike Fuel band slides on your wrist, doesn't really get in the way and is able to be worn in the shower.  As long as you remember to take the numbers with a grain of salt, the device is awesome.

I also highly reccomend picking one of these up if you just want to lose weight in general.  It makes it really simple to decide on whether or not you've been active enough that day.  Haven't hit your 4000 fuel goal for the day? Go cut the grass, no need to go to the gym!

Does the Fuel Band account for Basal Metabolic Rate?

This was one of the first things I wanted to know and the answer is no it does not account for Basal Metabolic Rate.  So if your BMR is roughly 1750 calories a day, and your fuel band says you burn 1000 calories, your caloric expenditure for that day would be roughly 1750.

How accurate is the calorie measurement on the Fuel Band?

The fuel band uses a pedometer and an accelerometer to track fuel/caloric consumption.  Because of this there is going to be a bit of discrepancy on the caloric expenditure.  I would guess that it would be +/- 10% of what the read outs have been on treadmills, elipticals etc.  Activities like weight lifting and Yoga would register lower than running since you aren't moving around like a maniac.

Does the Nike Fuel Band have a heart rate monitor?

Nope, the Nike FuelBand does not have a hear rate monitor, it relies on a pedometer and an accelerometer to measure your activity.  As I mention above, activities where you aren't moving around as much such as weight lifting or yoga won't track as accurately as activities like running.

How is Nike Fuel Calculated?

Nike fuel is calculated using a proprietary formula based on the built in accelerometer and pedometer.  It is designed to be a universal measurement of activity not bound by the constraints of height and weight.

How does Nike Fuel compare to Calories?

I'm 5'10 and about 175 lbs and for me, I notice that three Nike Fuel points equates to about 1 calorie.  So for me, there is roughly a 3:1 ratio. If your height/weight is dramatically different, your ratios might be slightly different.

After using my Nike Fuelband for three weeks, I'm confident I'm not making a snap decision on my opinion of the device.  I absolutely love it.  While it may not be flawless in terms of calculating caloric expenditure, it does a better job than anything else out there when you compare the convenience factor of having a small bracelet attached to your wrist vs an annoying arm band.

This product has definitely changed my life, if I'm a few hundred fuel points away from my daily goals, I go walk around the block to make sure I hit the goals I've set forth for myself.  In contrast, if I've had a busy day and burned enough fuel through chores, I don't have to waste my time going to the gym. The Fuelband takes the guessing game out of the equation and I love it. 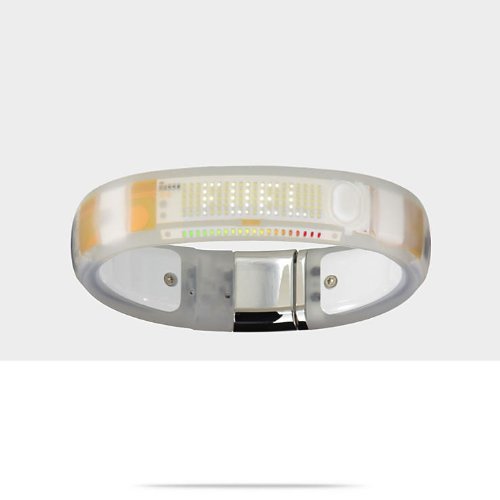 Nike+ Fuelband White ICE Medium-LargeAmazon Price: $184.90 Buy Now(price as of Jul 9, 2013)
The Ice White Nike Fuelband was not originally released when I did this review but has since gathered a lot of attention due to its modern appearance. This Ice White fuel is a white bracelet with a transparent outside casing giving you a glimpse at the guts of the fuel band.