My name is Rose and I am a Canadian freelance writer. I love to tackle human rights issues and anything related to the betterment of society and our planet.  For a sorted directory of my articles: RoseWrites.netboard.me Love to write too? Join me on here on InfoBarrel.
InfoBarrel is a writing platform for non-fiction, reference-based, informative content. Opinions expressed by InfoBarrel writers are their own.
InfoBarrel > Business & Money > Jobs & Careers > Management

A Closer Look at Why Some Teams Fail

Recently, a friend of mine remarked, "No good deed goes unpunished" (a popular quip of Clare Boothe Luce (1903 - 1987) after witnessing a coworker describe the questionable behavior of another employee. The person describing the scenario went to great lengths to protect the identity of her coworker - yet was reprimanded and demoted for bringing something unethical to light.
For the last 15 years that I've been researching adult bullying, there's one common truth: whistle blowers always get bullied.
The problem of adult bullying  in the workplace has been around a long time, yet it seems hard to define and recognize.
Today, I hope to shed some light on why some groups fail and some key signs that a corporate bully is perhaps dominating your team.

An article in Business Insider (written by Vivian Giang July 30th, 2013) titled: 4 Ways That Good Group Dynamics Turn Bad summarized the key points of what clinical psychologist Nicole Lipkin expands upon in her book titled What Keeps Leaders Up At Night which I just had to check out.

The following are three signs I've observed in team leaders which parallels what Dr. Lipkin addresses in her book:

1) Favoritism (and failure to look at group members objectively)
"Leaders who see a good team going bad must intervene immediately." ~ Nicole Lipkin
One of the biggest problems I've seen often is loyalty to specific people by team leaders. When faced with undeniable facts about sub par (or worse, unethical) practices within an organization, a leader who ignores valid complaints runs the risk of dividing the team.
What's more, in specialized groups - where every person is supposedly equal - this is problem is magnified. This lends itself to the next point that Nicole Lipkin stressed.
2) Us vs. Them thinking
Favoritism towards certain people in a group creates an unhealthy dynamic. Titles assigned to those who clearly show no tangible, verifiable expertise have undermined the reward system within an organization. Power in the wrong hands is a dangerous thing.
With an "Us vs. Them" mentality established, someone inevitably will expose an uncomfortable truth. When a team leader decides to passively ignore it and/or excuses the problematic behavior, the worst outcome is to decide to punish the whistle blower. Which brings me to point number three.
3) Blames the whistle blower and punishes him or her (rather than re-evaluate the facts and their own biases)
In teams where facts (even uncomfortable ones) are presented and discussed, the undesirable behavior is often stopped in it's tracks. By not revealing the identity of the employee, s/he is anonymously warned, protected, and given another chance. If the team leader decides to pass off the unethical behavior as insignificant (or worse, defends said employee) a mistrust looms within the group.
By punishing the truth teller, the team leader has created fear in other members of the group. Even with undeniable proof, other members will understandably be too afraid to bring valid concerns to the table.
Fear, imo, always negatively affects creativity, productivity, and morale. Which in turn, stifles progress.

So Why Do Team Leaders Turn a Blind Eye to Some Employees yet Appear to Pick on Others?

Simply put, favoritism and bias. Quite often, the unethical employee has managed to manipulate the team leader (not with quality work, but rather by filling an emotional need for approval and belonging). The team leader wants to be liked and feel s/he belongs to the group too. Lipkin coins this "extreme group conformity."

What conclusions can be made? When rash decisions have been made, sometimes it's best for team leaders to ask for outside help. For those in groups where fear has set in, you may wish to reconsider belonging to that team or organization.
Dr. Lipkin provides solid, doable advice in her book. I consider it a must-read for those who manage others (and it applies to any field of expertise - including parenting).

What Keeps Leaders up at Night by Nicole Lipkin 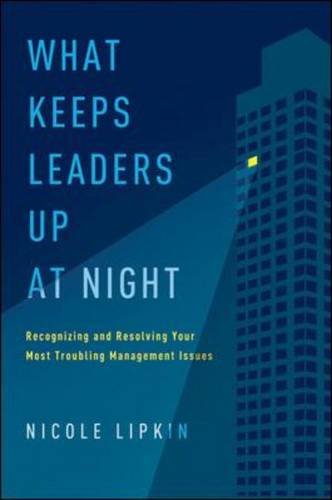 What Keeps Leaders Up at Night: Recognizing and Resolving Your Most Troubling Management Issues Amazon Price: $21.95 $0.28 Buy Now(price as of Sep 5, 2016)
This book will help team leaders and those in groups to examine their roles and resolve some of the toughest questions such as: "Why have I lost so many of my best employees to the competition?" and "Why do I sometimes feel threatened by my best people?" Top-rated reviews and you can click to look inside prior to purchase (also available in Kindle format).

Next >> How to Handle a Rude Coworker

Conflict Resolution Between Employees On A Small Business