Find me on Google+ Like what you see? Think you can do better? Sign up for InfoBarrel!
InfoBarrel is a writing platform for non-fiction, reference-based, informative content. Opinions expressed by InfoBarrel writers are their own.
InfoBarrel > Travel & Places > Places > United States

If you want to visit museums in Dallas, Texas, but are just not that into art, don't despair! No matter what your interests are, you are sure to find a museum that will interest you. Perhaps you are interested in a foreign culture, or transportation, or you just want to see some hunky fire fighters, or some historical places or artifacts, there is a museum just for you!

Museums are generally not for profit organizations, and rely on donors and gifts for money to operate. In tough times, museums may have to cut back on their hours, so be sure to call before you go to confirm whether the museum will be open at that day and time, even if their hours are published. Remember, many of the smaller museums are run by just a few volunteers, so a bout of the flu could put the entire staff out of commission at the same time!

Here are some museums outside the art museum genre that you may wish to visit in Dallas, Texas:

The Bath House Cultural Center and White Rock Lake Museum - Originally really a bath house, this Dallas landmark designed by Dallas architect Jon Carsey opened as a cultural center in 1980, and features art galleries, a theatre, a water feature designed to attract birds, and an amphitheatre. Each summer the Bath House Cultural Center hosts a theatre festival, and in the spring and fall hosts an enormous Art Mart. The attached White Rock Lake Museum, which opened in 2004, is a testament to the native wildlife, history, Native American settlements, and cultural features of Dallas and the White Rock Lake area in particular.

The Dallas Firefighters Museum - across from the historic Art-Deco style Fair Park of Dallas (where the State Fair of Texas is held each autumn), this museum is devoted to the history of firefighting in Dallas, and is housed in a fire station, the home of Hook and Ladder Company No. 3, that was built in 1907 and actively used until 1975. Among the attractions are an 1884 steam-powered fire engine nicknamed "Old Tige" after a former mayor of Dallas, W. L. Cabell, modern fire engines, over a century's worth of fire fighting equipment, and an engine for you (or your children) to climb on, fire fighters' hats you can wear, a gift shop, and more.

The International Museum of Cultures - founded by the non-profit and non-governmental organization, the Summer Institute of Linguistics, this museum is dedicated to preserving contemporary cultures around the world. Among the permanent exhibits are Drumbeats of the World, The Languages and Peoples of Mexico, The Philippine Agta, The NgBaka, Native Americans, Southeast Asia, and the Yi of China. In addition, the museum features a number of temporary exhibits, and all exhibitions are taken from the direct experience of linguists and anthropologists who have lived and worked in these areas for a number of years.

The International Museum of Cultures

The InterUrban Railway Museum - whether you love trains, or public transport, or the history of urban development, this museum is a fascinating look at how North Texas developed through the InterUrban line. Built in 1908, this electric railway ran for forty years between Dallas and Denison, and provided connections to Fort Worth and Denton (from 1914 it also delivered mail). This free museum displays numerous artifacts from transportation in the early twentieth century, and the building is the only surviving electric substation from the InterUrban transportation line.

John Neely Bryan Cabin - the person who might be called the father of Dallas, Texas, John Neely Bryan's historic cabin has been restored and preserved as a memorial to the person who served as a ferry operator and postmaster of Dallas, this Tennessee native was the single most influential person in establishing the city of Dallas, and naming Dallas as the county seat of Dallas County. Bryan also served on the board of directors of the Dallas Bridge Company, the organization responsible for building the first iron bridge across the Trinity River. This modest log cabin also served as the first courthouse in Dallas, Texas. (The windows are closed up, and so all you can see is the outside of the cabin. However, the construction is interesting.) The cabin is located in Thanksgiving Square in downtown Dallas, near the John F. Kennedy Memorial.

Latino Cultural Center - this enormous museum (twenty-seven thousand square feet) is a showcase for Latino music, visual art, theatre, dance, and film. It was designed by the famous international architect, Ricardo Legorreta, and is a stunning, beautiful building that contains a theatre space with three hundred seats, outdoor sculpture garden, a multi-use room, and an art gallery. This museum and tours of it are free, although admission may be charged for certain performances. If nothing else, it is a striking example of the art of urban planning, in setting this museum into a highly industrial district of the city.

Old Red Museum - This gorgeous former courthouse, built in the Richardsonian Romanesque style (an architectural style that features Romanesque arches, short, squat columns, recessed entrances, blank walls with bands of windows, and towers with conical caps), was built in 1891 and is listed in the United States Register of Historic Places and is also a recorded Texas Historic Landmark. Used as a courthouse until well into the 1980s (I attended a case there), the red sandstone and grey granite building has been lovingly and painstakingly restored to its full glory, and features an illuminated clock tower, the original vault, and a restored courtroom and grand staircase. Today it houses the city archives and features a multimedia history room on the second floor. 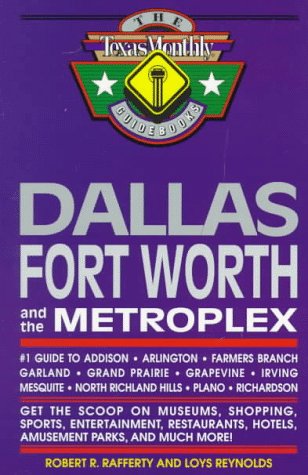 Dallas Fort Worth and the Metroplex: #1 Guide to Addison, Arlington, Farmers Branch, Garland, Grand Prairie, Grapevine, Irving, Mesquite, North Richland Hills, Plano, Richardson Amazon Price: $17.95 $3.08 Buy Now(price as of Oct 26, 2014)
Probably the biggest, baddest, and best guide to the Metroplex, since it includes all the suburbs. You won't get to everything, probably even if you live here.

So remember, museums, even in Dallas, go far beyond your typical art museum. Check some of these more unusual museums out and add spice to your next vacation or business trip to Dallas. You might find yourself returning to these remarkable tourist attractions again and again!