Where on Earth is Nunavut?

Nunavut is a vast but sparsely populated Canadian Arctic territory between the 60th parallel and the North Pole, with the Northwest Territories, Yukon and Alaska to the west, and Greenland to the east.

With 1,936,113  square kilometres of land, Nunavut makes up 21 per cent of the total land area of Canada. However, it also has an extremely small population. According to the 2016 census Nunavut had a population of 35,944 primarily living in 25 small communities, the largest being the capital, Iqaluit, with a population of 7,7401.

The Arctic has a frigid climate with long, cold winters and short, cool summers which seems dangerously hostile to human settlement.  The temperature in Nunavut's coldest community, Grise Fiord, rarely rises above freezing, and winter temperatures may drop as low as −50°C. Nunavut is not only cold, it is also extremely dry. Annual precipitation is so low, in fact, that it is classified as a polar desert.1

Nevertheless, the native Inuit people have managed to live successfully in this challenging climate and to develop a unique culture.  They migrated east from Alaska in the 11th century at around the same time that Norse pioneers from northern Europe were establishing farming communities in Greenland12.

Contact between Inuit and Europeans has a long but sporadic history. The Inuit originally traded with the Norse for metal tools, and subsequently came into contact with Basque and Portuguese fishermen and whalers who arrived in Labrador in the sixteenth century2. Searching for a Northwest passage to the Pacific, Henry Hudson, William Baffin and Robert Bylot undoubtedly encountered the Inuit when they explored Hudson’s Bay and the coast of Baffin Island in the seventeenth century3.

However, over-harvesting of whale stocks led to a severe decline in the whale population. This, combined with other factors such as the discovery of a new lubricant, petroleum, resulted in the gradual decline of the whaling industry4.

By the end of the century, the whaling industry in the Eastern Arctic had come to an end. Britain transferred her Arctic territories to Canada in 18805. However Canada did little to solidify legal claims to the North American Arctic until 1922 when Royal Canadian Mounted Police posts were established on Baffin and Ellesmere Islands, and annual ship patrols of the Eastern Arctic began1.

Otherwise, this vast frozen land was largely ignored by Canada and the world until the construction of northern air bases during World War Two. Subsequently, during the Cold War, a line of radar stations which constituted the DEW Line or Distant Early Warning System was constructed across Canada's north in order to be prepared for the possibility of a Russian attack.

The creation of Nunavut was the culmination of over forty years of negotiations concerning the largest Aboriginal land claim settlement in Canadian history.

In 1969 two important events took place.  A Commissioner of Native Claims was appointed to address Inuit grievances, including forced relocation and lack of economic opportunity. At the same time the Inuit Tapirisat of Canada (ITC) was formed to pursue land claims negotiations based on a historic precedent of 1,000 years of continuous occupation.6

In 1973 negotiations for aboriginal title were supported by favorable court decisions based on ancestral rights. The ITC began negotiating Inuit hunting rights, and received federal assistance for a study of land use and occupancy to support their claims6. Following lengthy negotiations, an agreement was ratified by 84.7 percent of residents in a plebiscite held in September, 1992.

The 1993 Nunavut Land Claims Agreement Act established the new territory of Nunavut by separating Canada's eastern Arctic from the western Northwest Territories. The Act gave the Inuit land rights to over 350,000 square kilometers of territory, including mineral rights to 36,000 square kilometres. It provided for capital transfers to the Inuit of $1.14 billion and an ongoing share of royalties from resource development. It also guaranteed territorial hunting rights and shared responsibility for land and environmental management7.

Nunavut elected its first Legislative Assembly in February, 19999 and its government, the first primarily Native government in North America, was established in April, 19998. Nunavut has a consensus government system, meaning that all decisions in the legislative assembly are  reached through majority consensus rather than by voting along political party lines.

The main industries in Nunavut include fishing, hunting and trapping.  Hunting and trapping contribute an estimated $40,000,000 per year to the economy. While there are commercial char, turbot and shrimp fisheries, much remains unknown about the ocean around Nunavut. The territorial government, with federal funding assistance, has purchased a ship to conduct marine research which could help to further develop the fishing industry 10.

Arts and crafts is another important source of income. Inuit carvings and prints are popular with collectors worldwide11.

The mineral wealth of Nunavut is a barely tapped resource with vast potential, but the extreme Arctic climate and poor infrastructure make it particularly difficult to develop. Minerals that have been discovered include gold, lead, zinc, iron, nickel, copper, platinum1 and diamonds.

Diamonds were first discovered in Canada's Arctic in 1991. Canada's first diamond mine opened near Lac de Gras NWT in 1998 and by 2003 Canada became the world's third-largest diamond producer after Russia and Botswana.1

As a leading producer of ethical diamonds, Canada became a key player in international efforts to regulate the diamond trade and prevent the illicit trade in conflict or “blood” diamonds, which are used to fund armed conflicts in Africa. Canada played an important role in the development and implementation of the Kimberley Process, a diamond certification programme designed to prevent the sale of conflict diamonds on the international market.13

Nunavut's first diamond mine was the Jericho mine, which opened in 2006.13 However, the history of diamond mining in Nunavut has been problematic. According to Wikipedia, the Jericho mine produced 780,000 carats of diamonds between 2006 and 200814 . Unfortunately, the company subsequently declared bankruptcy. The mine was purchased by Shear Diamonds in 2010 but the company's plans to revitalize the abandoned mine came to an abrupt end in 2013 when its administration office suddenly shut down and company personnel vanished.15

In 2017 the Federal government announced that it would go ahead with plans for environmental clean-up and stablization of the minesite16. In addition, there is a new company interested in opening a diamond mine north of Iqaluit if it can obtain sufficient funding17. 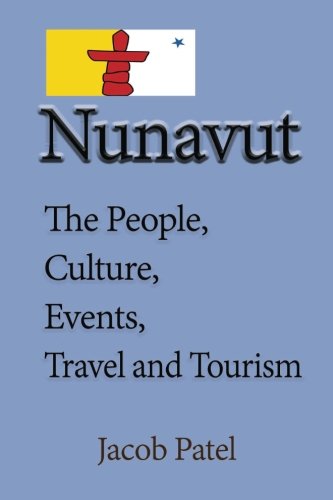 Another developing sector of the economy is tourism.

Many tourists are attracted to Nunavut's uniquely wild land, its austere natural beauty and its wildlife. The territory has five national parks and national wildlife areas, as well as territorial parks, historic sites and wildlife sanctuaries1. Visitors can enjoy outdoor activities such as hunting, fishing, dogsledding, bird watching, canoeing, and snowmobiling. They can also learn about the culture and history of the territory, enjoy local festivals and purchase Inuit arts and crafts18.

Economic development in this harsh, sparsely populated land remains a challenge. Mining could help to fuel development but there are also serious environmental concerns. The Inuit remain dependent on subsistence hunting, and the environmental impact of mining could severely impact the habitat of important species on which they depend, such as caribou.1

Another challenge which Nunavut faces is the impact of global warming, which is having a greater impact in the Arctic than other parts of the world.  Shrinking sea ice is threatening animals such as polar bears, seals and other animals which are a vital part of the Inuit diet. In addition, the permanently frozen layer of subsoil known as permafrost is melting. This results in ground becoming unstable, which poses a threat to housing and infrastructure1.

As global warming causes the sea ice to melt, Canadian Arctic sovereignty is becoming a vital issue. The Northwest Passage sought by seventeenth century explorers such as Hudson, Baffin and Bylot could well become ice free, leaving the Arctic Ocean open for international shipping as well as oil and gas exploration.

The United Nations Law of the Sea Convention, ratified by Canada in 2004, divides the Arctic between Canada, the United States, Russia, Norway and Denmark. However, the ownership of some areas remains in dispute. These include Hans Island, a small island between Greenland and Ellesmere Island in Nunavut, and the Lomonosov Ridge, an underground mountain chain which stretches from the New Siberian Islands in Russia to Ellesmere Island in Nunavut19. There is also disagreement between Canada and the U.S as to whether the shipping channels in the High Arctic are Canadian internal waterways or international waters.1

While Nunavut faces many challenges, it's people have moved rapidly in the last 60 years from a marginal hunter gatherer society into the complex, multinational world of the twenty-first century. Nunavut also has the fastest growing population in Canada. The 2016 census showed a 12.7 percent population increase from 2011, with 30% of the population under the age of 14, giving Nunavut the youngest population in the country.1

Nunavut, which means "our land" in Inuktituk, is young, proud, and ready to face the opportunities and challenges of the 21st century.