Some of the 'Official State Horses' for the United States

There are fifty States in the United States of America. No new information there! All States have various symbols and icons which represent their region. Birds, mammals, plants, flowers, etc are recognized as 'their' emblems, specific perhaps to their area or of especial importance. But only a few States have an 'Official State Horse' as part of their cultural entity. The following are some of those while the rest can be found in a separate article.

1975 - Racking Horse - Official State Horse - AlabamaIn 1975, the racking horse was designated the 'Official State Horse' of Alabama. Like the American Saddlebred and the Tennessee Walking horse, the racking horse is gaited. The smoothly moving 'rack' was popular on the southern plantations where overseers and plantation owners spent long days in the saddle. The 'rack' is sometimes called 'single-foot'. This gait is a bi-lateral, four-beat gait which each hoof hitting the ground one at a time. The rack of the racking horse is not artificially achieved but is a naturally inherited gait.

So plantation owners were pleased to find a breed that had the stamina to sustain a fast, smooth, comfortable gait for long periods.

The racking horse averages about 15.2hh and weighs around 1,000 pounds. It is attractive and graceful with a high tail carriage and long, sloping shoulder. It has a friendly, kind disposition, is intelligent and versatile and is ideally suited as a family horse.

1975 - Appaloosa - Official State Horse - IdahoIdaho adopted the Appaloosa as its Official State horse in 1975. There is even a custom licence plate which features an Appaloosa. The Appaloosa has the same genes for colour as the Danish breed, the Knabstrup. The first spotted horses to appear in America were taken there in the 16th century by the Spanish Conquistadors.

Most of America's first horses were brought out by the Spanish Conquistadors in the early 1500s. Some of these escaped or were stolen by local Indian tribes. The Nez Perce Indians in particular took particular pride in their spotted horses and paid great attention to improving the breed through selective breeding practices. Today most Appaloosas have an athletic build. Types vary a little depending on whether the line has been developed for working stock, as sport horses or for racing or trail-riding.

1961 - Morgan - Official State Horse - Vermont1970 - Morgan - Official State Horse - MassachusettsVermont and Massachusetts both have the Morgan horse as their State animal. The Morgan is indigenous to North America and one of its oldest breeds. All Morgans descend from one bay stallion. This little (14.1hh) stallion out-pulled and out-trotted almost every horse in his area. He was also very prepotent and passed on his attributes to all of his progeny. They were willing, strong and fast. The Morgan has had an influence on many breeds. The Standardbred, Missouri Fox Trotter, Tennessee Walker and American Saddlebred all have Morgan blood. More recently, the Morab breed has been bred from crossing the Morgan and Arabian, producing an outstanding new breed which is proving very popular.

The Morgan holds his head high and proudly. He is deep-bodied and compact with strong quarters and sound, hard hooves. His high action suits him to harness work. Despite his stylish appearance he is a very calm horse with a friendly nature.

The Morgan became the State animal for Vermont in 1961. It was also appointed the State horse for Massachusetts in 1970.

Kentucky is known as the 'bluegrass State'. Native bluegrass is a staple of Kentucky's fertile pastures. The State has a lucrative industry breeding and training thoroughbred race-horses. Thoroughbreds are also important in Maryland which runs one of the three races (Preakness States) which count towards horse-racing's annual Triple Crown.

The thoroughbred began in England way back in the early 1700s. All English thoroughbreds trace back to one of three foundation sires – the Byerley Turk, the Darley Arabian and the Godolphin Arabian. The Thoroughbred is highly intelligent and generally more highly strung and temperamental than most other breeds. Professional riders like a mount with at least some thoroughbred blood as it gives the animal speed, courage and spirit. Show-jumping, eventing and hunting all seek a fast, courageous animal which thoroughbred blood supplies.

The average height is around 16 hands. The body is streamlined and the legs long and slim. The hindquarters should be well muscled to provide good impulsion. The withers are generally high. There should be good width in the chest allowing plenty of room for the heart and lungs. Strong legs and hard, sound feet are necessary if a horse is to stand up to the training and constant strain of competing. The head is lean and elegant. The coat is thin and fine and rarely provides enough insulation during the winter necessitating rugging and/or stabling. The Thoroughbred is an outstanding example of an equine athlete.

The Missouri Fox Trotter developed in the early 19th century in the Missouri and Arkansas regions. A comfortable, sure-footed horse was needed that could negotiate the often rough terrain and that could go all day. Not satisfied with comfortable and sure-footed, the early colonists also needed their horses to look good in a buggy or under saddle. After crossing Morgans, Thoroughbreds and Barbs with local horses, Saddlebred and Tennessee Walking blood was added later, resulting in an elegant gaited all-purpose horse.

These are just some of the 'Official State Horses' of the USA. What a wonderful way to commemorate the noble creature who gives so much pleasure to so many. 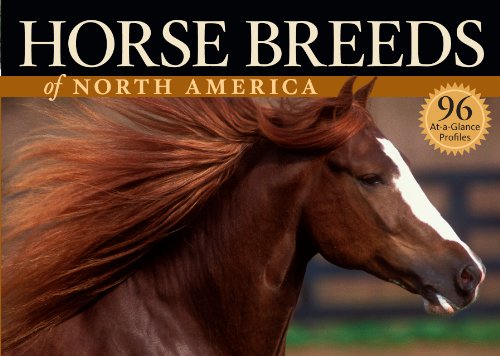 Horse Breeds of North America Amazon Price: $10.95 $2.81 Buy Now(price as of Jun 11, 2015)
This photographic guide details 96 horse breeds of North America. There is a full-page photo for each together with a description, history, uses and origins.
Next >> Zika: The Warnings About Wolbachia and Culex Our Health Authorities are Ignoring