You are never to old to defend humanity....

At least that is what the Colonial Defense Force wants you to believe. This book is based in a

universe in which there are many alien species and only so many habitable worlds in which to expand your race onto. This as you can imagine leads to just a wee bit of conflict between humanity and the rest of alien races that inhabit our part of the galaxy. Enter the CDF, the military arm of the Colonial Union which is the governing body of all the colonies that humanity has succeeded in expanding and holding onto. The CDF is always in need of new recruits due to the constant state of warfare that humanity seems to find it under. This is where the elderly of Earth come in with our large population and desire to live longer than our allotted span of years. You can sign up to serve with CDF on a couple of conditions,

-You sign up without knowing what you are getting involved in.

Well for some people it certainly is and you get people joining up with the CDF in droves and among the droves is John Perry the protagonist of our story. You follow his life as he leaves Earth, is given a new lease on life and is thrust into combat against amazing and sometimes awful alien species that would prefer to have you smothered will bbq.

I was honestly surprised how much I enjoyed this book. It is the debut novel of John Scalzi which almost netted him the Hugo Award for Best Novel in 2005. Full of quirky details, plots twists and driving story that sweeps you into a grand space saga this book is a must read for anyone that loves science fiction, military fiction and character driven stories. It is the first in the series of excellent books that take place in the Old Mans War universe and I would highly recommend them all for reading. 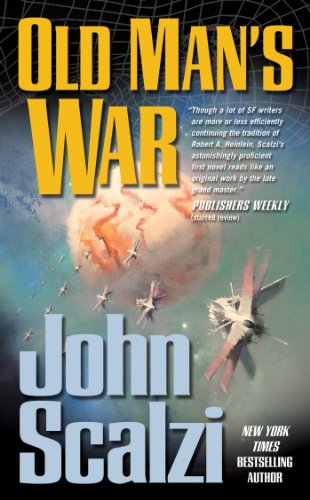