One Of A Kind - The Common Wombat

The Common Wombat - an example of a monotypic species

There are three species of wombat but the common wombat (coarse-haired or bare-nosed wombat) is the only one in the genus Vombatus, making it a monotypic species.

Wombats are marsupials and native to mainland Australia and Tasmania. They were often called badgers by early Europeans because of their resemblance to the European badger. The wombat is the world's largest burrowing animal and the second largest marsupial. Some kangaroo species are larger.

Range and HabitatThe common wombat is widespread in the cooler and wetter parts of southern and eastern Australia. It is still seen in mountain districts as far north as southern Queensland. It is quite adaptable, found in forested, mountainous and heathland areas.

DescriptionThis species is an average of 98 cm long and weighs 26 kg. They are sturdy little creatures, short-legged and muscular and built close to the ground. They are built like small tanks and are nearly as unstoppable. Unlike the hairy-nose wombats, the common wombat has a bare nose. There is a stubby tail which is usually almost hidden by fur. The head is large, broad and flattened and the neck short and muscular. The eyes are small and their eyesight is poor. However they have an excellent sense of smell and keen hearing.

The hind legs are longer than the forelegs although they don't appear so. Because of this the back is rounded and slopes down.

The wide paws have five digits. The soles of the feet are thick and padded. The front teeth are rodent-like and the shoulders powerful for digging. The paws are quite dexterous and may be used as hands to rip vegetation from the ground and transfer it to its mouth. One difference between the bare-nosed (common) wombat and the hairy-nosed wombat is that the bare-nosed can make a fist with its hand and can therefore climb although it doesn't usually bother. (Captive juveniles enjoy a bit of a climb apparently.) The wombat is a good swimmer.

A unique defence of the wombat is the toughened, very thick hide over its rear. This cartilaginous plate over the rump and the lack of a decent tail, makes it very difficult for a predator to extricate a wombat from its burrow if it goes in headfirst then blocks the entrance with its rump. It may allow a predator to get its head over the top of the rump then push up off powerful back legs to crush the predator's skull against the roof of the tunnel. They will also kick out with the powerful hindlegs.

Wombats are powerful excavators and are purported to outdig a man with a shovel. Solid rock and loose sand are the only types of terrain that stops their tunnelling.

Like all marsupials, the wombat has a pouch but in the case of the wombat, the pouch faces backwards so that it doesn't get filled with dirt when the wombat is digging. It also gives greater protection to the young as there is very little ground clearance. Other marsupials that have backward facing pouches are the koala, bandicoot and Tasmanian devil.

The skull is large for the size of the body. The brain occupies most of the space and has many surface convolutions, indicating a high degree of intelligence.

BehaviourThe wombat is mostly solitary and territorial. It establishes a range for itself of up to 23 hectares and digs a tunnel system consisting of a main tunnel of 2 to 20 metres long with many side tunnels.

There is usually only one entrance with sometimes a smaller one as an escape hatch. They spend about three-quarters of their time in their burrows. Metabolism drops by a third, conserving energy. They suffer easily from heat stress and will walk into water to soak themselves.

Wombats defend their home territories and do not welcome intruders, becoming very aggressive. Territories are marked with scent trails and droppings.

Wombats are mostly nocturnal although if the weather is cool, they can be found foraging in the early morning and late afternoon. They are shy but inquisitive and occasionally become friendly with people

The fur varies from a sandy colour through to black. Like the koala, the wombat has a very slow metabolism, taking 8 to 14 days to complete a digestive cycle. This helps their survival in arid conditions. Although for preference they shuffle and waddle along slowly, they can reach speeds of 40 km/h for up to 90 seconds. Wombats are very playful and will run about doing shoulder rolls and somersaults. They will run away to encourage being chased and enjoy head-butting.

ReproductionWombats breed every two years and have a single joey. After a gestation of 20 to 30 days, a joey of about 2 grams is born. It is blind, deaf and naked with very thin skin. It crawls into the pouch and attaches itself to a teat. The teat swells and holds the joey preventing it from falling out. It stays in the pouch for about five to eight months. It leaves the pouch for short periods at first, returning if it gets a fright.

Credit: By Peterdownunder (Own work) [CC-BY-SA-3.0 (www.creativecommons.org/licenses/by-sa/3.0) or GFDL (www.gnu.org/copyleft/fdl.html)], via Wikimedia Commons

They are weaned at 12 to 15 months and are usually independent and sexually mature at 18 months of age.

NutritionThe wombat is herbivorous, eating a number of plant and grass species including grasses, sedges, bark, roots and herbs. Moss is a favourite food and many acquire a taste for vegetables. The faeces are typically cube-shaped.

Interaction with HumansAn angry wombat is a formidable foe and humans are best advised to scale a tree until it calms down. Wombats will charge if surprised or angry and can knock a person from their feet. Their claws and teeth are sharp and the animal itself is very strong. The teeth will penetrate boot leather. Wombats do not make good pets. Although they look gorgeous when sleeping in a bed with their head on a pillow, they are strong and wilful. Removing a door from its hinges or barging through a fibro wall is the least of its worries. Why go around an obstacle if you can go through it quicker? The wombat never really learns good manners but will get upset if thwarted. For a marsupial it has a relatively large brain and strong instinctive behaviour which makes it reasonably easy to return a captive wombat to the wild where it belongs. 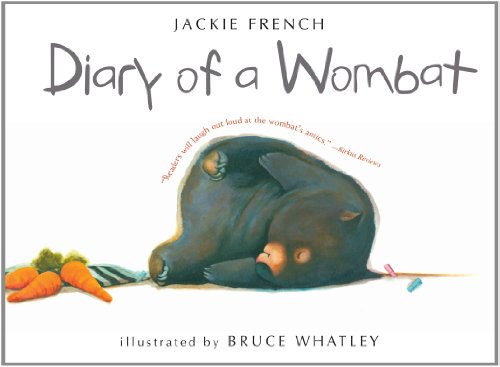 Diary of a WombatAmazon Price: $6.99 $2.68 Buy Now(price as of Jul 27, 2013)
This wonderful story will have you laughing out loud! Told by a wombat, its persistence is emphasised as its goes about its daily business. The drawings add much to the story.

ThreatsHabitat destruction has had a major impact on the wombat. Although they are mostly protected, they still fall prey to dingoes, foxes. Tasmanian devils (in Tasmania), dog attacks and many become road kill. Young wombats may be taken by eagles, owls and eastern quolls. Many wombats fall prey to sarcoptic mange which has been introduced by human activity. The mites cause deep skin fissures which quickly become fly-blown and septic. This leads to a slow, painful death. They also contract a fatal fungal lung disease. Other diseases and viruses are now plaguing wombats.

ConservationThe common wombat is decreasing in numbers in western Victoria and South Australia. October 22 is now observed as Wombat Day. This is traditionally the beginning of the aboriginal spring planting season.