One of A Kind - The Edible Dormouse

The Edible Dormouse - An example of a monotypic species

The edible dormouse is a foreign species in England. Introduced species can wreak havoc with native populations, threatening wildlife numbers as they all compete for food and shelter.

But what a name for a poor little dormouse! Edible dormouse! It is also called the fat dormouse so it must surely grow up with a heap of complexes.

The edible dormouse is a large dormouse and the only living species in the genus Glis. Its scientific name is Glis glis. There are a number of monotypic species which have a whole genus to themselves. Such animals as the red panda, numbat, black rhino and pronghorn are the only representatives of their particular genera.

The ancient Romans considered the flesh of this species a delicacy. The animals were 'farmed' by the Romans and kept in large pits or, if space was a bit tight, in cages or special terracotta jars called 'gliraria'. They were given as many acorns and chestnuts as they desired. When they were nice and fat – off with their heads!

The edible dormouse has a natural range across central Europe and Asia. It is still consumed in Slovenia where trapping is an ethnic tradition. There is documentation to support the consumption of the dormouse since the 13th century. The cormouse was also used for it fur and the fat was believed to have medicinal qualities. For the impoverished people of those early years, the additional protein provided by seasonal dormice feasts would have been very welcome.

This species is 5.5 to 7.5 inches long with the tail adding another 4 to 5 inches to the overall length. While its normal weight is between 4.2 and 5.3 ounces, this may almost double just prior to hibernation. The body is similar to that of a squirrel. The ears are small, the legs short and the feet large. It is grey to greyish-brown in colour and there is a clear line between the grey pelage and the white to pale buff underparts.

Unlike most dormouse species, there are no dark facial markings, just faint rings around the eyes. The long, bushy tail is slightly darker than the rest of the body. Females have two rows of four to six teats. If something grasps the tail, the skin at the top of the tail breaks easily allowing the dormouse to make his escape. The exposed bony tail breaks off and the wound heals. 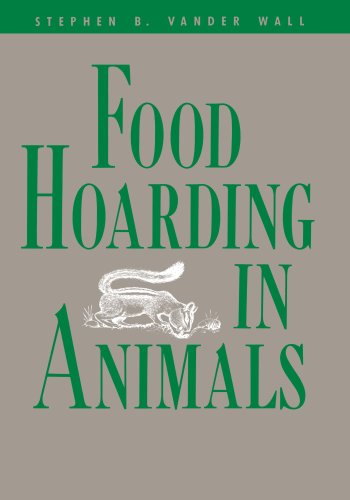 Food Hoarding in AnimalsAmazon Price: $52.50 $49.39 Buy Now(price as of Aug 30, 2013)
This comprehensive work discusses all aspects of how and why animals store food.

Edible dormice are found in deciduous forests, especially if dominated by oak and beech. They prefer dense forests but also turn up in orchards and suburbia. They have been reported in deep caves (to 400 metres). Females have very small homeranges but males cover a wide much wider range and will have several burrows. They are mostly herbivorous, eating berries, apples and nuts. They also eat bark, leaves, fungi, carrion, invertebrates, flowers and eggs.

Edible dormice are nocturnal. They are good climbers with hard pads on the paws and spend a lot of time in trees. They communicate with various squeaks and snufflings and also have scent glands on the feet and at the base of the tail.

Hibernation takes place roughly from October to May depending on conditions. Related animals may hibernate as a group in deserted rabbit-warrens, fox-holes or in the rooves of buildings.

They prepare a den or find a nice cave and rely on stored body fat to survive the winter. They reach an almost comatose state and may stop breathing for up to an hour at a time. The metabolic rate and body temperature both fall dramatically during hibernation. 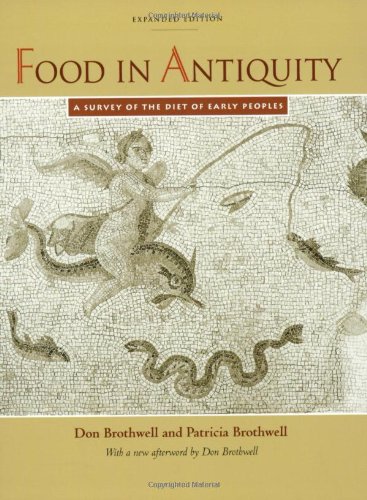 Food in Antiquity: A Survey of the Diet of Early PeoplesAmazon Price: $24.95 $20.56 Buy Now(price as of Aug 30, 2013)
This world-wide survey of the dietary habits of early peoples is engaging and informative.

One litter a year is the norm. Males visit the females' territories and scrap with any other males they come across. When ready to mate, the female drags her anal area along the ground leaving a scent trail for the males to find. Males perform a circular courtship dance round the female before mating. After a gestation of 20 to 30 days, typically 4 to 5 young (but up to 11) are born in a nest. A hollow tree is the preferred nest area and will be lined with soft grasses and feathers. The babies are born blind and helpless, only 2 to 3 grams in weight. By 16 days, they have furred up and the eyes open at about 21 days. They leave the nest after a month and are sexually mature after their second hibernation. They are surprisingly long-lived, having a lifespan of up to 12 years in the wild.

In 1902, edible dormice were introduced into the private zoo of Lord Lionel Walter Rothschild in Tring, Hertfordshire. Some of these escaped and the creature now occupies a 200 square mile 'patch' of the county. They are considered a pest in Britain and are now listed as one of the top dozen or so 'greatest threats' to the English countryside.

The edible dormouse, if present in large numbers, causes damage to orchards by stripping off bark and eating fruit. They also chew through wires and wood surfaces in residences.

In parts of Europe, deforestation has caused numbers to drop. Predators include the foxes, badgers, eagles and owls. In its native Europe, the edible dormouse is declining and is regarded as 'lower risk' by the IUCN Red List.