Here's a lot of exciiting infomation about the common onion--the "miracle" food. Join InfoBarrlel's Family of Writers www.infobarrel.com
InfoBarrel is a writing platform for non-fiction, reference-based, informative content. Opinions expressed by InfoBarrel writers are their own.
InfoBarrel > Health

When I was a kid I remember my mother gazing into our empty refrigerator and ending up making us onion sandwiches for dinner. This sounds like a sob story, I know but, trust me, it is not. We were onion eaters and loved them and we ate them regularly no matter how much other food we had—we fried them, boiled them, pickled them, put them in salads and often ate them as some people eat apples.

I grew up having lots of wonderful health—I climbed mountains, I was a scuba diver, I was out there in all kinds of weather and usually having a great time. Then I got cocky I guess because I quit all that and began mistreating my body thinking…well, I wasn’t thinking so I ended up pretty much out of shape and headed downhill. I ended up facing a killer disease that landed me in the hospital for three months. The doctors were sure I would never make it and when I did they took to calling me Iron Man Jack and Miracle of the month. Why am I sharing all this with you? Because I believe it was my childhood diet and all those onions I ate that reinforced my immune system and gave my body that extra push throughout my life and yes, even over those decades when I paid no attention to my health whatsoever. Anyway, about five years or so after the first time, I got hit by the same disease and again was placed on the “feet first” list. The doctor actually told my wife to call my relatives as I was not going to last. That was quite a few years ago and here I am still kicking. And so, I want to share the good news with you and tell you what I know about what I call “the miracle food.”

I conclude that onions, growing wild, were probably consumed for thousands of years by our prehistoric cousins prior to the advent of civilization. The Chinese were growing onions at least 5,000 years ago and the ancient Sumerians had onion patches 2,500 years ago. They were actually worshiped in Egypt where they symbolized eternity. Kings and queens were buried with onions because they were thought of as being magic.

The Israelites ate onions, in India they were used as medicine and the Greeks used them to strengthen their athletes. Indeed, before competitions the Greek jocks ate onions, drank onion juice and even rubbed onions on their bodies. In Rome, Apicius

famous for writing the world’s first cook book in the eighth century, made a lot of references to onions. During the Dark Ages rich and poor ate onions and they were also prescribed by doctors for such ailments as headaches and snakebite. The very poor actually paid their rent with, what else, onions. Onions were also planted by the American pilgrims back in the 1600s and our Native Americans ate a wild-growing variety. And, as said, we ate onions often at our house. In fact, when I was a young boy growing up at my grandmother’s, we ate pinto beans at least three days a week for what we called supper. They were always smothered in onions!

The question is are onions truly a miraculous health food or are they not? We’ll answer that question next.

From the time I was a little boy I was told by the adults in my world that onions were good for you and believing this I ate them with great glee regardless of a few tears welling in my eyes and sometimes a slight burning sensation in my mouth. I was also told if I ate my spinach I’d grow up to be like Popeye and I believed that too. My grandmother also told me that garlic worn around the neck kept winter colds away so it’s no wonder that I could never get a date.

The truth about onions is, however, that they not only have real healings powers but are also a natural preventative medicine. And yes, they actually reduce the risks of many types of cancer: Colorectal, laryngeal, ovarian, oral and esophageal. This is not just me or my dear old granny talking but scientific researchers.

Indeed, the nutrients in onions bathe us in vitamin C, fiber, manganese, molybdenum, vitamin B, foliate, potassium, tryptophan and are very low in calories. Just like someone once said, onions are not only doggone good, but doggone good for us!

Of the three most popular types—red, brown and white

whites are known to be least in nutritional benefits but they are rich in quercetin, a powerful flavonoid that Chinese researchers say can actually stop the growth of cells in lung and stomach cancers.

It is also reported that eating onions helps people suffering from arthritis and asthma to fight inflammation so often related to those diseases. Also, good news for those with diabetes (I raise my hand) eating onions can actually reduce the symptoms of diabetes. Just a cup of raw white onion contains 24 mcg of chromium which works to regulate blood sugar. This claim, however, comes only from research on animals so far but all the signals are there for positive human results.

Onions are also healthy food for the heart. Researchers today have found that eating raw onions—even a half of a white or yellow onion lowers bad cholestral and raises good cholesterol levels. And speaking of health benefits, human studies have shown that onion can increase bone density and may be a key to benefit women of menopausal age helping them to avoid hip fracture.

In light of all this, we can only conclude that yes, onions are a miracle food!

Like all other vegetables onions are most valuable if you can, grow your own and eat fresh. After all, for the backyard or even the container farmer, onions can be fun and easy to grow. They’re a winter crop so simply check when the best planting time is in your region and…dig in.

Little green onionsare good for us but not as fully as healthy for us as the more pungent reds, browns or whites. They sure are tasty though!

Wild onions are were called “she-gau-ga-winshe” by the Chippewa Indians who found them growing thick in the area now known as Chicago. This indeed is where Chicago got its name—she-gau-ga-winshe!”

Incidentally never peel onions under cold running water—some of their wonderful nutrients can be washed away. Never store your onions with potatoes as they will spoil faster and finally, if you are one of those persons who can’t stand to eat raw onions, boil them in some water to make a great onion soup.  The onions will lose some of their nutritional power but the water they are cooked in will maintain it.

A Must Have Book for Home Gardeners 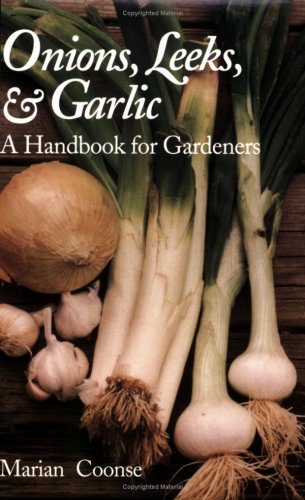