Credit: By LaurMG. (Cropped from "File:Frustrated man at a desk.jpg".) [CC-BY-SA-3.0 (http://creativecommons.org/licenses/by-sa/3.0)], via Wikimedia Commons

“Most men lead lives of quiet desperation and go to the grave with the song still in them.”

Are you frustrated by your situation in life? Perhaps you aren't earning enough to make ends meet, or you have been stuck in a dead end job for years. Perhaps you can't find a job at all. Maybe you're alone and lonely. Whatever you think makes your life suck, you don't know what to do about it. That's bad, but there is something worse than not knowing what to do. It's the wrong-headed belief that there is nothing that you can do because you have no control over what happens to you. You have a recording playing in your head on an endless loop that says "What's the point of trying? I have to accept it because that's just the way it is."

Excuse my being blunt, but that's a load of baloney, my friend! Far too many people spend years in misery simply because they believe foolishness like that, and never stop to consider the alternative. What if the reality is that the thing that's holding you back is all in your head? What if you're behaving like a trained elephant?

As you know, elephants are majestic, beautiful, and most important, powerful animals. The males can grow to 13 feet tall and weigh 12,000-15,000 pounds. They are so strong that they used as heavy equipment in some Asian countries. Yet, as anyone who has been to the circus can attest, these behemoths are held in check by relatively small chains attached to one of their legs and staked in the ground. An adult elephant could easily rip that stake out of the ground and run off to glorious freedom. Why doesn't he do it? Because he learned at a very early age that he couldn't, and at that time he was right. When the elephant was a baby, his trainer restricted his movement with that same chain and stake contraption. The difference was that the baby elephant couldn't yank that stake out of the ground. He wasn't strong enough. He tried and tried, but because he was a little guy then, that stake wouldn't budge. Eventually, he just gave up and accepted his fate, even when he had grown large enough to have the power to change everything. The elephant has a condition called "learned helplessness."

In 1965, at the University of Pennsylvania, Dr. Martin Seligman was researching  classical conditioning,  an area of psychology made famous by the researcher Ivan Pavlov and his work with dogs back in the 1920's. As you probably recall, Pavlov discovered that if he gave the dogs some meat powder while ringing a bell a the same precise moment, eventually they would begin to salivate at the sound of the bell alone. The dogs exhibited a "conditioned response."

Dr. Seligman decided to test this conditioning theory by ringing a bell right before giving a dog a light (and non-life threatening) electrical shock. Sure enough, eventually as soon as the dog heard the bell, he reacted as if he had received the shock. Then, in an interesting next step, Dr. Seligman placed each of the dogs who had been subjected to the shock in a large crate divided down the middle by a low fence that they could easily jump over. The floor on one side of the crate was electrified, while the other side was not. He put the dog on the electrified side and administered the light shock, fully expecting the dog to do what would come naturally; that is, jump to the other side. They did not. They just laid down as if they believed that there was nothing that they could do to avoid the discomfort. To verify that this belief had indeed become embedded in the brains of these poor dogs, Dr. Seligman tried the same experiment with the divided crate with dogs who had not been subjected to the original conditioning. They reacted completely differently, immediately jumping to the other side to avoid the shocks.

Are you letting your own teensy weensy chains hold you in a bad place? Are you lying down on the electrified floor because you think there's nothing that you can do? Stop fighting mental health! You can overcome the shackles of self-doubt, insecurity, bitterness or anxiety, but you've got to grab the reins and turn your situation around. Passive acceptance is not an option! Here are some action steps that will help you make it happen.

Analyze whether you suffer from a learned helplessness mindset

Lots of people don't even realize that they are living with this destructive outlook. How can you tell if you are one of them? Do you approach obstacles and difficulties as permanent and insurmountable, or simply as little bumps in the road that you haven't figured out how to overcome yet? If a person walks around complaining or wringing his hands about a situation rather than trying to find a solution to the problem, that's a dead giveaway that he is suffering from LH.

I have a friend who was very distressed about her elderly mother's poor nutrition. Her mom had no appetite and wasn't eating. My friend had no idea what to do. When she mentioned it to me, I suggested that she consider one of those commercial nutrition supplement drinks that are available in every drug and grocery store. She appeared stunned. "I never thought of that!" she exclaimed. Rather than calmly reflecting on the problem and brainstorming solutions, she simply threw up her hands and assumed that there was nothing she could do, even though a simple, affordable and widely available solution was easy for her to obtain.

Your problem may not have such an obvious solution, but by adopting a problem-solving outlook you will quickly realize that if you don't have the answer, you can probably find it. The secret is believing that you can solve the problem rather than accepting that you have no control.

Recognize That Overcoming Learned Helplessness is Not Easy

Most people aren't born with an attitude of learned helplessness. It develops as a reaction to the inevitable vicissitudes of life, in which we all experience unfairness, disappointment, setbacks and even tragic events. The key is in the word "reaction." We often have very little control over what happens to us, but we have 100% control over how we react to what happens. As the old adage goes, into every life a little rain must fall. Do you reach for your umbrella and forge ahead, or retreat into a "woe is me" mindset? Ultimately, it's up to you. 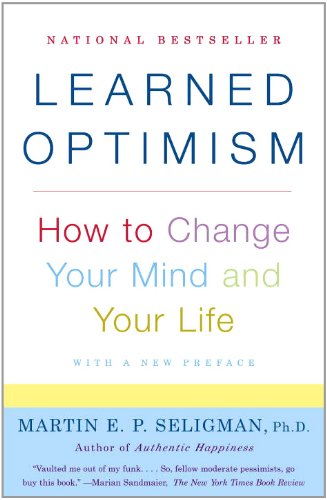 Learned Optimism: How to Change Your Mind and Your Life Amazon Price: Buy Now(price as of Sep 10, 2014)
This book written by Dr. Martin Seligman will help you put the suggestions in this article into action.
Next >> How to Get Creative Juices Flowing - Get Your Body, Mind and Soul on the Same Page