“Everything in life is writable about if you have the outgoing guts to do it, and the imagination to improvise. The worst enemy to creativity is self-doubt.” â€• Sylvia Plath, The Unabridged Journals of Sylvia Plath Be fearless. Start writing today for Infobarrel and make $$$ while you're at it.
InfoBarrel is a writing platform for non-fiction, reference-based, informative content. Opinions expressed by InfoBarrel writers are their own.
InfoBarrel > Entertainment > Art & Design

Most people today think of the mermaid as a beautiful, aquatic maiden who bestows kindness and human like qualities. But did you know that nearly 200 years ago, there was something called the Fiji mermaid? Unlike our popular perception of these maidens, this one was grotesque and ghastly. It frightened the crowds of people who would go to see the corpse stored in a glass case.

Fact or fiction? Read on.

The Story of the Fiji Mermaid

Back in July 1842, an Englishman named “Dr. J. Griffin”, a member of the British Lyceum of Natural History, arrived in New York City with something very strange and curious: the corpse of a mermaid caught in the South Pacific near the Feejee Islands. This supposed sea creature caught the attention of the media, who were very anxious to get a look at the artifact and learn more about it. The press had been receiving letters all summer long from the Southern correspondents that described Dr. Griffin and his exhibit. They ate it all up, wanting to hear more and finally get a chance to see the corpse for themselves.

Dr. Griffin checked into a hotel in Philadelphia with the mermaid, all the while knowing that everyone was hungry to see the spectacle. He stayed at the hotel for a few days, keeping good relations with the public and the hotel landlord. At the end of his stay, Griffin showed the landlord his finding as a form of gratitude for the stay. The landlord was amazed and intrigued at this strange sight. So much so, in fact, that he pleaded with Griffin to show his friends what he had seen as well.

Grudgingly, Dr. Griffin complied. The delay and uncertainty in showing the artifact had added to the intrigue. The media and public were sent into a frenzy. P.T. Barnum followed up by visiting major newspaper offices to share his story about how he had wanted the doctor to exhibit the creature at his museum, yet Dr. Griffin refused. Thus, Barnum now had no use of a woodcut mermaid and gave it to the papers for free. The sculpture was of a beautiful, topless feminine creature with long hair. The newspapers reported the story of Dr. Griffin's finding along with the sculpture P.T. Barnum had given them. At the same time, P.T. Barnum had 10,000 pamphlets describing the aquatic creatures, with special emphasis on the “Feejee mermaid”. The illustration once again showed beautiful feminine creatures, appearing to be amusing themselves above the surface of the ocean.

Such descriptions and illustrations of the supposedly mythological creature drove the public wild. In legends, they were always portrayed in art and literature as graceful, womanly creatures that beguiled many a man with their beauty and charms. To think that they could possibly exist in reality like they had envisioned was enough to make the Feejee exhibit the talk of the town. Everyone was anxious to see it for themselves and could not stop talking about it.

As a result of this frenzy, Dr. Griffin agreed to exhibit the creature for a week at Concert Hall on Broadway. Swarms of people went to the exhibit, listening to Dr. Griffin give lectures on his time as an explorer and theories on natural history. Afterward, Dr. Barnum allowed for the exhibit to stay in New York City for longer than a week by moving it to the American Museum of Natural History. Tickets to the museum compounded as still more people arrived to see the sea creature for themselves.

The mermaid was then sent on tour to the southern parts of the United States, where there was controversy on whether or not it was real. The tour was ended early as a result, and the Feejee Mermaid was sent back to New York. Afterward, the creature was transported back and forth in exhibitions between Moses Kimball’s museum in Boston and P.T.’s museum in New York. After twenty years of such an arrangement, it mysteriously disappeared. In the 1860s, the museum caught fire multiple times, during which the artifact was supposedly lost. It is not known whether the corpse was actually burned in the fire.

The first way in which the media and public were deceived was by the portrayal of the mermaid. Woodcut sculptures and illustrations depicted beautiful mermaids with long, flowing hair. However, the Feejee mermaid was anything but! The top half looked like a dried up

monkey, and the bottom half was a thin and withered up tail. This mermaid ruined the image that many had had of mermaids, when they saw an ugly dried creature before them. P.T. Barnum describes it in his journal as “an ugly, dried up, black-looking and diminutive speciment.”

Dr. Griffin himself was not who he claimed to be. His name was Levi Leyman, and he was one of Barnum’s close associates. There was no British Lyceum of Natural History, as he claimed to be a member of. The story had been set up to create hype and credibility to the exhibit, which evidently worked.

The biggest deception of all was that the mermaid was fake. “Griffin” did not catch the creature; Barnum leased the creature from Moses Kimball, knowing early on that it was fake. He had gone to a naturalist to determine whether or not it was real, at which point he was assured that it was not.

Ripley's Believe It or Not!

The Origin of the Fiji Mermaid

In Japan and the East Indies, it was a traditional art form to stitch the upper bodies of apes onto the tails of fish, thereby creating faux mermaids. These creations were used in religious ceremonies. Samuel Barrett Edes purchased the Fiji mermaid from Japanese sailors in 1822 for $6,000. It was put on display briefly before Edes’ son sold it to Moses Kimball, a showman, in 1842. Kimball showed the creature to Barnum, and that was the beginning of the Fiji mermaid’s celebrity.

Although it is likely the mermaid was lost in the fires of the mid-1800s, its spirit lives on. Harvard University’s Peabody Museum of Archaeology and Ethnology had used proof to indicate that they had the original mermaid, although it looks a little different from the original. Many other museums put exhibits of fake Feejee mermaids, with some claiming to own the original mermaid.

To learn more about mermaids, why not learn more in The Legend of the Mermaid? 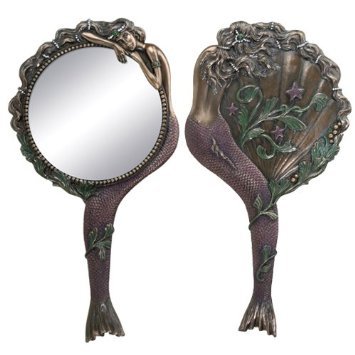