Von Rosenberg is a non-profit executive and consultant with too many years of experience. He enjoys discussing archane topics and occasionally plays at being a cutler. Von blogs about his experiments on using the internet to generate income on The Niche Blog. Drop by sometime and have a laugh!
InfoBarrel is a writing platform for non-fiction, reference-based, informative content. Opinions expressed by InfoBarrel writers are their own.
InfoBarrel > Health > Nutrition & Weight Loss

What is the Paleo Diet?

The Paleo Diet, based on the diet of mankind before the invention of agriculture some 10,000 years ago, is one of the latest trends to hit the ever-changing world of health consciousness. It takes more traditional low-carb diets one step further by completely eliminating grains, dairy products and most high-starch foods from the diet, replacing them with balanced quantities of meats, fruits, vegetables and nuts.

Paleo Diet TheoryThe Paleo Diet is built on the assumption that mankind ate a diet of simple and natural non-agricultural foods for hundreds of thousands of years before the invention of farming around the year 8,000 BC. And that, at the time of the development of agriculture, both health and life-expectancy experienced a sharp drop. Proponents of this diet, or "lifestyle", as Paleos like to call it, believe that if we return to a pre-agricultural diet, we will experience a return to the health and longevity experienced before the development of agriculture, without the need for modern medicines and technology to keep us alive.

Paleo Guidelines or What Am I Not Supposed to Eat?The Paleo Diet is fairly easy to understand, without having to purchase a specific book, or follow a particular guru or television doctor. Simply ask yourself, was this food available before the invention of agriculture? It the answer is no, then it is probably something you shouldn't eat. Bread, for example, which has been called mankind's first processed food, is made entirely of grain, the seeds of certain grasses. Before agriculture, grains would have been rarely if ever eaten. Extracting the small seeds was simply too much work for too little reward, and almost no nutrition. Sugar, another food on the paleo hit-list, was consumed (and still is) by pre-agricultural people around the world. But, it is eaten in its natural form contained in fruits and vegetables, not in the form of extracted and purified sugar crystals, like those you buy at the store. Sugar in this form comes from modern facilities that are called, in the sugar business, "refineries." Paleo fans avoid eating anything that comes from a refinery!Each person has to interpret the Paleo Diet as they are able, based on their own understanding of what paleo-era people may or may not have eaten. Potatoes, for example, are generally considered a farming crop, and it is unlikely that pre-agricultural society ate them extensively, so some Paleo-Dieters avoid them. However, other Paleo fans point out that when present-day hunter-gather people run across a potato plant, they don't just leave it, but in fact, will dig up the plant and remove the tubers for later consumption. Almost universally, people around the world from Borneo to Africa to the jungles of Central and South America, will leave some of the tubers in place to regrow so that they can eat them again in the future. So, even Paleo-Dieters are sometimes divided about what should and shouldn't be eaten.Milk is another area that sometimes divides the Paleo community. While it is obvious that no caveman ever wrestled wild goats to the ground in order to milk them (and thus, cavemen did not drink milk), it is just as clear that many non-agricultural societies around the world do keep animals to milk. The difficulty comes from our concept of "paleo." Some pre-agricultural people were (or are) pastoralists. They gather nuts, fruits, berries and vegetables, but have substituted raising livestock (usually goats or cattle) for hunting. And, to make it more complicated, some hunter-gatherer societies practice primitive farming to supplement their diets, instead of relying on gathering. For example, many stone-age people around the world will make a clearing near the village and plant some foods there so that they are closer to home and can be more easily tended and guarded.The desire to "paleo-ize" the diet goes beyond foods. Many Paleo-Dieters include salt on the list of no-nos. Today, pre-agricultural people around the world rarely supplement their diet with salt, instead obtaining enough from their food to cover their needs. Grains, used to make breads, are lacking in natural salts, and as a result, the salt trade began about the same time as the rise of agriculture, in order to supplement the farmer's diet. 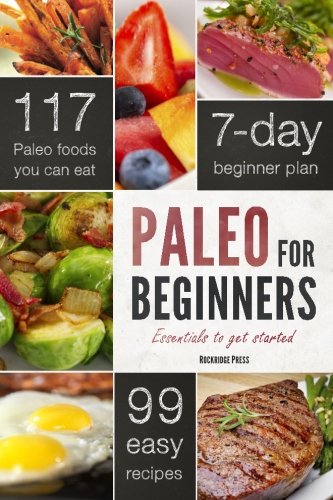 What Can You Eat?Meat. You can eat any amount of meat. Again, this theory rests on the idea that paleolithic people depended on hunting to meet most their nutritional needs. And indeed, most hunter-gatherer societies spend a great deal of time and energy obtaining meat. Modern scientific diets discourage consumption of large amounts of meat. Paleo supporters argue that meat (and specifically, fats) are only harmful in conjunction with foods like grains and starches, and that when eaten in a more natural diet, and combined with physical activity, fats and cholesterol pose no health risks. Paleo dieters also emphasize diets high in leafy green vegetables, fruits and nuts. They believe that these foods will promote human health and undo some of the damage brought on by high-carb, chemical laden modern foods. For some Paleos, leafy greens, fruits and nuts are used to supplement a diet high in animal proteins, while for others, meats are used to supplement a diet that is high in fruits and vegetables. Again, the choice is up to the dieter, much as the choice would have been up to the caveman 10,000 years ago... do I hunt today, or do I gather?

But Does it Work?Whether the diet works or not depends on your goals. If you are determined to lose 50 pounds, then the Paleo Diet combined with exercise, will probably work. Because it discourages high carbohydrates and encourages high protein, the paleo diet is very similar to many other low-carb diets that have become well known in the last few decades. Such diets are very popular with athletes, whose profession requires that they be fit and energetic at all times. Studies have shown that lowering your intake of carbs in general reduces inflammation in the body and joints, and therefore has a positive effect on chronic pain.  It has also been observed to increase energy levels, which is, again, another reason that athletes like low-carb diets.If, on the other hand, your goal is to reduce your cholesterol levels, then the jury is still out on whether the Paleo Diet is a good approach or not. Although some studies have indicated that a diet rich in lean meats does not contribute to heart disease, especially when combined with exercise, there has yet to be a conclusive study confirming that red meat and grains combined together are the culprit when it comes to cholesterol levels. If you are interested in trying out the Paleo Diet because it looks like it would easy for you to follow, or perhaps you simply do not tolerate glutens, the primary protein in gains, then the Paleo Diet might be for you!