Parrots of Australia - The Adelaide Rosella

Rosellas are parrots with most of them found around the edges of Australia. The Adelaide Rosella is sometimes called the Pleasant parrot. It is a subspecies of the crimson rosella. Some sources believe another subspecies exists. However as the Adelaide parrot is not above co-habiting with the crimson rosella or the yellow rosella, differentiating between the birds becomes quite complex.

This species is endemic to South Australia and is found in the Mount Lofty and Flinders Ranges. It has also adapted to the parks and gardens of the suburbs of Adelaide, the capital. It is found in woodlands, frequenting staying around water courses or along country road. It is common in orchards where it regarded as a pest.

There is little difference between the sexes. The head is a bright –orange red with a violet-blue cheek patch. Underneath the plumage is a mix of red, orange and yellow, the mix varying with the individual. The feathers on the back are dark but have an orange border. The wings are mainly blue with darker tips. There is a narrow grey eye-ring. The rump is orange and the tail varying shades of blue with the underneath a pale blue.

Australian Parrots, Third EditionAmazon Price: $57.95 $35.10 Buy Now(price as of Aug 5, 2013)
This comprehensive volume is very thorough with each species given an extensive description.

Once birds reach their second moult at around 12 to 16 months old, they gain their adult colouring and are sexually mature. Adults range from 35 to 36cm in length and have an average weight of 140 to 150 grams. The birds travel in pairs or groups. In the wild it eats seeds, fruit and wild olives.

The breeding season is from September to February. A tree hollow is chosen well above the ground. The base of the hollow has a natural covering of wood chips and dirt. Males bow low and call to the female. If she happens to like him, she will do the same. They may feed each other before mating. Four to six white eggs are laid and incubation takes about three weeks during which time the male feeds the female. At six weeks chicks leave the nest and are independent in another few weeks. If conditions are favourable a second clutch will be raised. The lifespan is likely to exceed fifteen years. 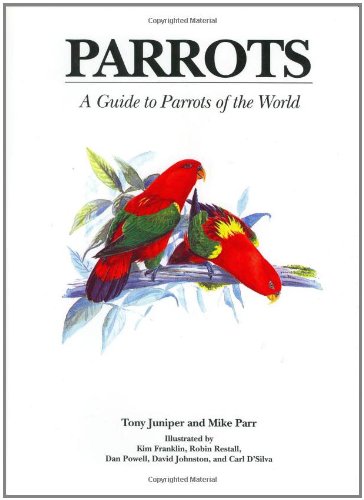 Parrots: A Guide to Parrots of the WorldAmazon Price: $75.00 $54.45 Buy Now(price as of Aug 5, 2013)
Created primarily for field identification, this volume has superb colour illustrations of every species and most subspecies of parrot, as well as range maps. Has up-to-date information on the conservation status of the various species.

A long flight aviary suits the rosella as it likes to fly. It can be aggressive to other birds and during the breeding season a pair will definitely need its own aviary. If housed next to antoher pair, they may need a solid wall before they will concentrate on each other and not be distracted by their neighbours.

Aviaries need to be metal framed as wooden aviaries will be chewed to sawdust after a few season. The birds need shelter from draughts and bad weather. Place the nesting box high in the aviary but not where it will become too hot. Placing leafy branches in the aviary will give the birds something to do and stop them becoming bored and destructive. Rosellas love their bath and a concrete floor will be easier to clean.

Adelaide rosellas are considered a pest in orchards. Apart from pecking at ripening fruit, they also attack flowers and buds prior to fruiting.