Buy Paslode tools cheaply from Amazon. You too can earn money from writing articles by signing up for InfoBarrel.
InfoBarrel is a writing platform for non-fiction, reference-based, informative content. Opinions expressed by InfoBarrel writers are their own.
InfoBarrel > Technology > Tools

Paslode® gas nail guns are specialist cordless nail guns (and staplers) and are available in a variety of different types which have different joinery and carpentry uses. Although they may seem similar - they are all nail guns after all - it is important to use the correct nailer for the job. The nail guns use strips of nails which are loaded into the magazine. Most nailers will take a variety of nail sizes. Paslode nail guns are building code recognised.

These are terms used in the UK construction industry. First fix is the work up to and including platering internal walls; second fix the work from plastering to finishing the house. With regards to joinery, first fix would include the installation of walls, floors and ceilings. Second fix would include fitting doors and skirting boards. This is only a brief and incomplete list. Different nailers are needed for both first fix and second fix; second fix work will be finished up more neatly than first fix.

Something like the 325 CT nailer would be used for first fix joinery. 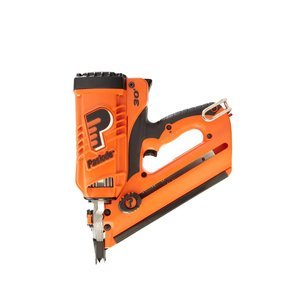 A nailer of this type would be used in second fix joinery work.

These nailers do not require electricity when being used, although they do need charging up before hand. They are also not air nailers so do not require the use of a (noisy) air compressor. This means there are no easily-damaged electrical cables around when the guns are being used, or any air lines containing pressurised air. They work using a combination of rechargeable batteries and "fuel cells."In addition, should there be no current source of electricity on site - not uncommon when doing major work on a house - the rechargeable batteries will mean the guns will still work, although power is of course needed to charge the batteries in the first place. This can be done off site, but an adequate number of charged batteries will be needed when back on site.

The "fuel cells" are not actually normal fuel cells; this is just the name they are called by the manufacturer. They are small metal canisters filled with a flammable gas under pressure. The battery provides a spark to ignite a charge of fuel when the nail gun is used which fires the nail out of the nailer. The spent gas is then blown out of the ignition chamber, making a noticeable and possibly offensive smell.

Disposal Of The Fuel Cells

The cells themselves are considered hazardous waste. Although homeowners and their contractors may dispose of them in a normal manner (subject to checking with the appropriate authorities) larger industrial organisations, retailers, commercial and governmental entities will normally have much more stringent disposal requirements.

These nail guns are much easier to use than a hammer and nails. They are pricey though so, unless you are planning to do a huge amount of home renovation work or are a professional, they are not really worth buying as they are somewhat overpowered for anything other than professional or contract building and joinery work. For professional use they can, even with the purchase price, prove to be a money saver as the time saved by using a nail gun as opposed to hand nailing can reduce the cost of a job. Given enough time, the nail gun should pay for itself. Paslode provide a calculator on their site so that you can see how much money buying nail guns might save you.

Paslode nailers are fairly expensive items. They are pretty tough and long lasting, especially if good care is taken with them and they are serviced regularly. As such, second hand nail guns are always an option if the funds to buy a new one are unavailable. It is also possible to buy second hand nail guns factory refurbished by Paslode themselves as well as by third parties.

The price and availability of second hand guns can vary; during the recent recession in the UK the amount of construction work being done dropped substantially and as a result the nailers were more readily available and could be bought for less money than a few years previously, such as during the extensive property and building works after the 2007 floods.

Given the cost of these nail guns it is highly recommended to only buy second hand guns that have had genuine Paslode replacement parts fitted in any repairs done to them. The same applies to maintaining your own nail gun - there is no point saving a few pounds or dollars on a part if you damage your several hundred pound or dollar nail gun. Cleaning kits can also be bought to help keep your nail gun in top working order.

These Are Not Toys

The nails are effectively fired with a great deal of force from the nail gun; sufficient force to penetrate wood from many metres away and would in fact go right through fairly thick wood or engineered wood or board when touching the surface. Yes, it would be possible to get other items, such as arrows or darts, to stick into wood from some distance away, but both of those examples are designed to fly through the air and stick into a target. Nails aren't, and so they require greater force to do so. Although the nail guns do have safety measures built in, it's expected that anyone using one of these will know what they are doing, so they aren't idiot (or ignorant, or child) proof.As such, these nailers are dangerous and could easily cause a serious injury - flesh being substantially softer than wood. They MUST be kept out of the reach of children - keep them locked away and with the gas canisters removed when not in use. The gas canisters themselves are not safe, given that they contain a pressurised flammable gas, and must be kept away from heat sources. 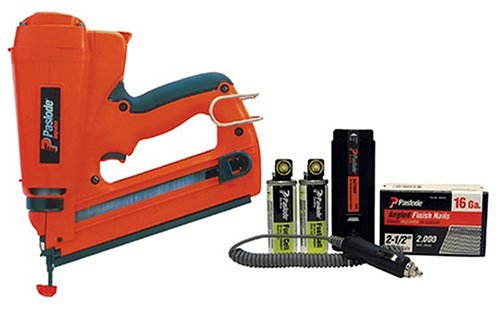