InfoBarrel is a writing platform for non-fiction, reference-based, informative content. Opinions expressed by InfoBarrel writers are their own.
InfoBarrel > Entertainment > Games > Playstation > PSP

Persona 2: Innocent Sin is one of the greatest Japanese RPGs ever made, yet was only released in English two years ago for the Playstation Portable. First released in 1999 for the original Playstation, it’s part of the long running Shin Megami Tensei series, and the Playstation Portable port was translated by Atlus in 2011. Those who can look past the dated graphics and mechanics will find Innocent Sin to be an immensely satisfying experience.

For those unfamiliar with Megami Tensei (called MegaTen for short), it’s a long running Japanese RPG series that focuses on real world settings, mythological and occult elements, and complex gameplay systems. Once an untranslated curiosity, the past decade has seen more Megaten games coming out in the West. Persona is one of many MegaTen spinoffs, and one which aims for a more mainstream audience than other games in the franchise.

Starting with the release of Shin Megami Tensei Nocturne (the third game in the mainline Megaten series) in North America in 2004, Megaten fans outside of Japan have never had to worry whether the latest installments will be translated. Innocent Sin is an older installment that fans desperately wanted to see released overseas, and with the PSP Port released a couple of years ago, Atlus USA finally decided to bring it over.

The Persona series is simpler and more story driven than other MegaTen games, and Innocent Sin is no exception. Whereas Shin Megami Tensei focuses on dark, philosophical themes and take place in post-apocalyptic Tokyo, the Persona games are a bit lighter, have younger casts, and take place in fictional Japanese cities.

It may have taken 12 years for Innocent Sin to reach English audiences, but it’s well worth the wait for fans of classic RPGs. The story is one of the most well written in an RPG of any era. The gameplay is also solid overall, though it’s much easier than other MegaTen or Persona games (and was made even easier for the PSP port). Unlike older Shin Megami Tensei games, which have large dungeons, challenging battles, and deep character customization, Innocent Sin is a simpler game that will appeal to RPG fans looking for an excellent overall package.

The PSP port is of Persona 2 is largely the same game, with a host of refinements and minor additions. The interface has been revamped, for one. It’s far more stylish and easier to use than the original Playstation version. The soundtrack has been updated (and the game still gives you the option of the original music), and the graphics have been formatted to fit the PSP’s wider screen. Battle animations can be skipped with the start button, which makes combat much speedier than before. There are also a few new optional scenarios through the game’s theater mode, though no new story additions otherwise.

Persona 2: Innocent Sin takes place in the fictional Japanese city of Sumaru. Rumor has it that if you call your own cell phone, a mysterious figure called The Joker will come and grant your wishes. After encountering The Joker at the start of the game, the cast - a group of high school students, and a couple of reporters investigating the Joker rumors - try to unravel the mystery behind the man and the cult-like Masked Circle. Innocent Sin’s story ramps up in intensity as it goes along, and (coming as no surprise to people who’ve played RPGs before) eventually the fate of the world hangs in the balance.

What makes Innocent Sin’s story so good is the sheer amount of thought put into its characterization, and the attention to detail regarding the story and setting. While the story has plenty of fantastical elements like Personas, demons, cults, and supernatural forces exerting their influence on humanity, there’s also a very human and real element to Persona 2’s cast. Each character has their own extensive backstory, character arch, and motivations which are much more relatable than those of other RPGs. They deal with things like acceptance, loss, and family issues, and these themes are seamlessly tied into the larger narrative.

Also worth noting is the sheer amount of text and detail in Persona 2 - not just for the main story, but also for things like NPC dialogue. NPCs will change up their dialogue after nearly every major story event in the game. Enter stores and businesses, and you’ll also get a chance to talk with your party members (who also change their dialogue after story events) - and Innocent Sin does a great job revealing little optional nuggets of information or insight into the story and setting this way.

While Innocent Sin does rely on some RPG clichés - such as saving the world from a supernatural big bad - it still manages to tell a far more human story than many video games even attempt. The Persona games are known for their great casts, dialogue, and plotting, and Innocent Sin doesn’t disappoint in that respect.  It’s still a far cry from the best of other mediums, but considering the quality of most RPG stories even today, Persona 2’s plot is a great achievement.

There’s a lot of thought put into the gameplay as well. The battles are straightforward, but unlike other RPG series, in Persona 2, you actually have the option of talking with enemies instead of just fighting them. These (often hilarious) conversations help get you items, money, and most importantly tarot cards, which you use to summon more Personas to use in the game. Spells and taking advantage of elemental weaknesses play far more of a role in Innocent Sin than in other RPGs (as much as I love the PS1 Final Fantasies, when in those games do you really need to take advantage of a certain spell or weakness?). Summoning Personas is not just important for abilities, but for things like character stat development as well.

There are also a lot of little things to do in the game and side quests to unlock. The only thing is - none of it matters that much, because the game is so easy you’ll hardly ever have to worry about the intricacies of its gameplay systems. Despite all of the Personas and abilities you have at your disposal, you’ll only really have to change your characters’ Personas a few times during the entire game. You have to be a bit more careful with abilities and your defenses compared to other RPGs, but as long as you do that the game is still a breeze. There are very few points in the game, except maybe towards the end, where you’ll have to put any real thought or effort into battle strategies. If you like exploring and uncovering secrets, you’ll still enjoy that aspect of the game a lot. Still there’s no real need for any of it, which may damper some gamers’ enthusiasm for discovering all Persona 2 has to offer.

Still Innocent Sin is worth it for those who want a solid classic RPG. Despite its sheer ease, the gameplay is still really enjoyable, and the plot and characterization are among some of the medium’s best. It’s a slightly dated game that holds faster to genre conventions than other games in the Persona series, but the execution and port refinements make this a must play for fans of RPGs from any era. 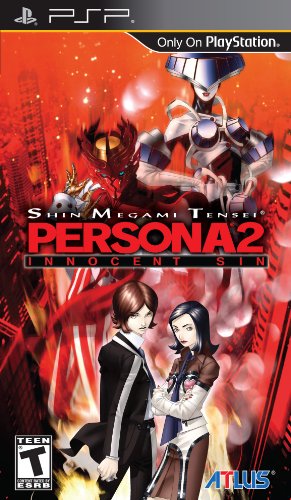