Appearance Of The Tarsier

This primate species looks like a monkey with its large eyes and strongly detailed fingers. It is about 120-150 mm and only weighs 115-140 grams. The actual eye socket of the Tarsier is larger than the brain. The tail is quite long, reaching up to 230 mm and has no fur on it except for the very tip. Their tail is used for balancing while they cross from tree to tree. The term "tarsier" came from the animal's ankle bones. Its ankle bones have been fused together in evolution to absorb shock. This animal moves almost like a frog. Their feet look extremely awkward, as if they had cat/mouse "toes" gripping onto the branch.

The Tarsier pictured above looks so cute and cuddly. You could almost pick him/her up in your arms and bring them home. However, it is important to know that these are wild animals. If you do happen to see one, just admire those huge and beautiful eyes.

You will see the Tarsier living in areas of large tree trunks and plenty of root and bamboo plants. They will occasionally burrow into an open hole within the tree to hide. They will spend all day hiding, while at night these creatures search for food. Their diet consists of cockroaches, crickets, reptiles, birds and bats.Even though Tarsier's seem like they stay still when you watch them, you should see them spring into action. They'll start jumping around to catch their prey. Another interesting fact is that they work alone and throughout their history, there has never been a colony recorded. Since they don't breed in colonies, you won't see them in groups that often. However, some of them do stay in groups from time to time.

These animals are extremely interesting to watch in their groups since they socialize through high pitched calls. Most of their calls are somewhat piercing to the human ear. Prior to a fight, they will make a soft call almost similar to a bird. During group speaking, they will loudly chirp amongst one another. The female has her own distinct call during the time they are fertile.

The Birth Of The Tarsier

Once a Philippine Tarsier female has mated, there will be a gestation period of 6 months. There is only one baby born and a time. The babies are born with wide, open eyes and already developed with fur. Full length after birth is 66-70 mm and the tail measures 115-118 mm long. The mother will often be seen carrying her infants inside of the mouth or on the belly. Mothers have to be extremely careful since they do not have a nest, they will carry their baby everywhere with them. The babies will feed from breast milk for around 2 months and then be ready to get their own diet. It will be about two years until the Juvenile Tarsiers are sexually capable of mating. 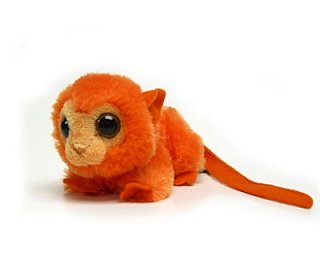 Brightly Colored Orange Tarsier 8" by AuroraAmazon Price: $13.98 Buy Now(price as of Sep 14, 2013)
Next >> Zika: The Warnings About Wolbachia and Culex Our Health Authorities are Ignoring