As I study physiology once more (initially for physical therapy, then for massage therapy, again for bio-medical engineering, once for personal training, and now for holistic nutrition), I'm struck by how many ailments all connect to the same thing, bad sewage.

Bad sewage is when the metabolic wastes of our cells get stuck in our system and start backing up like a thick clogged drain and harden like crusted gristle on a pan. You see every time our cells breathe nutrients in, they also exhale toxins out. The body manages this waste by picking it up and transporting it out of the body through the kidneys.

The fluid that picks up the trash and takes it out is the interstitial fluid (also known as lymph fluid). It's a fat based fluid that is appropriate for the corrosive acid waste that comes from our cells, unlike blood that must maintain a neutral pH of 7.04.

It is the exhaled waste from our cells, this corrosive acid, that gets backed up in the body and causes all kinds of problems. When our interstitial fluid stops moving we may not know it right away but all hell breaks loose. Acids begin to build up and the body sends out all of its defenses to protect itself. Calcium the ant-acid is brought in (and with it a hardening); water is brought in (edema); cholesterol is brought in (fatty buildups); and mucus is brought in all to douse the flames.[3]

Besides the acids directly causing degeneration by burning our tissues, overstimulating glands and causing irregular cellular activity, it is these defense reactions that cause other degenerative issues by creating obstructions.  Here are a few symptoms that I happen to review while studying physiology.

Osteoporosis ensues when minerals are leached from our bones to neutralize acids in the body. Arthritis transpires when acids attack tissue and is common in areas where acids  accumulate. With gout uric acid accumulates because it's not being flushed away.

Strokes are due to interruptions in the blood supply to the brain from blocked arteries. The blockage is accumulated fat and calcium which was put there to protect the arteries from acid. Tubes are put into ears to allow sticky glue like fluid (mucus reactions from acid) to drain. In glaucoma, pressure builds up in the eyes because of blockages to the flow of eye fluid. All obstructions are due to our body's defenses against acids.

Gingivitis, gastritis, hepatitis, and other inflammatory bowel diseases are stimulated by acids. Kidney stones are an accumulation of calcium oxalate not flowing through the kidney filtration process.[2]

Atherosclerosis (narrowing and stiffening of arteries) and all of its related symptoms such as stroke, heart attack, angina, high blood pressure and embolisms are caused by fatty and calcium deposits on artery walls. The defense items are being put there to protect the arteries from acid.

When cellular waste collects and hardens in areas that are supposed to have flowing lymph it causes pain, and stiffness.  The stagnant acids stimulate and irritate cells nearby causing abnormal cellular behavior such as overactive and under-active endocrine glands, and even irregular cellular reproduction (cancer).

Asthma, bronchitis, and ammonia are all inflammatory responses. The body's response to heat (acid) and toxins. Rashes are also an inflammatory reaction where we can see the acid build up in the skin. Backed up sewage can get so bad that the only way it can get out is through the skin.

The mysterious and systemic symptoms of autoimmune dysfunction are perfectly explained when considering the faulty sewer system.  Acids have accumulated everywhere and flare up when under stress. This was my ailment for decades. My new awareness of this faulty sewer system makes the study of Physiology and its disorders fascinating. The chronic disposition of our society is clearly all about sewage. All of our degenerative diseases relate to acid back up.

I hope you are asking why. Why does the metabolic waste get stuck? Why isn’t it moving? Well, our systems were meant to be hydrated with energetic fluids that keep interstitial fluids moving, and our kidneys were meant to pass these acid compounds out of our system but both of these systems have been compromised. Interstitial fluids have stopped moving because we stopped eating appropriate amounts of fruits, ripe, in season fruits. And kidneys have stopped filtering out these acids because we have been eating way too much protein, both meat and dairy.

These conditions are true for practically everyone who has grown up in America. For generations we have been coached to eat well rounded meals, to make sure we get enough protein, and to not overdo it on fruits. So for generations we have been wearing down our body's sewer system, each generation getting worse and worse.[1] When studying for my certification in Plant Nutrition from Cornell, I learned that seven out of top ten causes of death are due to chronic degenerative disease. Degenerative disease is always related to obstructions in the body and inflammation. Those causes of death and their rankings are:

It’s time that we stopped this downward spiral. We need to eat more fruit (lots more) to stimulate lymphatic movement so it can loosen up that hardened material and wash it away. And we need to stop eating all forms of animal protein, especially meat and dairy which shut down the proper utilization of the kidneys.

Instead of living with these degenerative conditions, lets give our bodies what it needs to run exactly the way it was meant to run. Gone are the days of my rashes and muscle pain, my brain fog and stomach cramps. Now I make my body happy. It looks like this.

Oh, and just so you know, my final grade in Physiology this time was 97%. 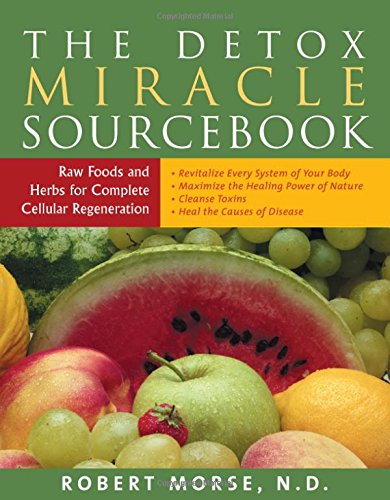 The Detox Miracle Sourcebook: Raw Foods and Herbs for Complete Cellular Regeneration Amazon Price: $29.95 $18.29 Buy Now(price as of Feb 20, 2016)
Next >> Zika Shrivels Testes, Drops Testosterone, and May Cause Infertility