Behance for previous works ^^, Infobarrel for more articles ^^, Writing is a common way of expressing ones' self; and that’s why I love staying on this blank page, widening my “Imagineering skills”, and then…. Okay, let’s just start writing! If architecture is the art of wasting space (Philip Johnson), then writing is another artistic way of wasting a blank page. Enjoy reading? visit my contents that might interest you. :) share your thoughts and ideas in infobarrel too! sign up here
InfoBarrel is a writing platform for non-fiction, reference-based, informative content. Opinions expressed by InfoBarrel writers are their own.
InfoBarrel > Lifestyle > Pets & Animals > Dogs

Pit-bulls should be loved not feared 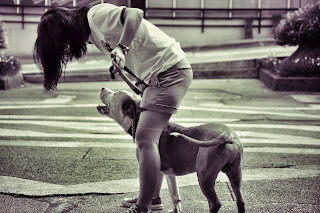 I am a dog lover

Feed them is what I do

Clean them is another duty to attend to

Walk with them a day or two

And they shall walk a lifetime with you

This is a poem I made that I have posted on one of my blogs. I suddenly thought about my dog, he is named after the brave chameleon Durango, later on Rango. My dearest friend is a dog breeder and me, always wanted to own a dog. The truth is I prefer toy dogs over guard and big dogs. But this friend of mine has always been an animal lover (he even dreams of becoming a veterinarian) and had a pit bull way back then. When he heard about pit bull puppies being sold, he asks me to buy one. We went to the breeder and check the puppies. When I saw the dam (mother of the puppies) it was so thin that it makes me pity her. She gave birth to 10 puppies, half of them not so healthy. We decided to take the two but waited for some more days for them to stay with their mother. But as we visit the puppies whenever we have a free time, we noticed that the owner doesn’t really know what he’s doing, and then later on admitted that it’s his first time to breed. The puppies even get thinner and looked malnourished so we decided not to wait for some more days; we offered to just get the puppies and have them injected to prevent viral infections. We took the two puppies and brought them directly in a pet clinic. They were so cute that everyone gets to love these cute little puppies. Some would even say that they didn’t know pit bulls would be that cute and lovable. However, our duties with the puppies don’t stop there; we decided to pay a visit the remaining puppies. To our surprise, only three were left, the others die. When breeding, I believe it is and will always be the responsibility of the breeder to keep the puppies safe by getting them at their first vaccine and deworming to make them healthy and boost their energy; and that’s what the owner didn’t do.

The notion that pit bulls are fierce and vicious made a bad reputation for these dogs. I’ve read several articles that say pit bulls should be feared; poor dogs and much poorer human mentality. I pity these dogs as I pity those who think pit bulls are too dangerous animals. This repute wouldn’t even exist if the breeders and owners will be kind enough to treat their dogs’ right. Just like what I've said a while back, pit bull isn't really a breed that describes a certain race of dog, but in a broader world, they are divided into two. Well this division is just made solely by the breeders that will separate the dogs from two areas according to how they were raised. 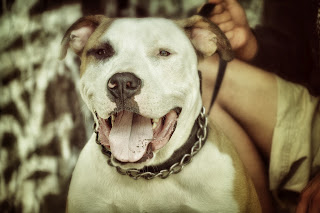 Imagine the subdivision of man in a society; the elites who go to some elegant parties and lower class who fights with their might to be able to eat. Just like humans, these dogs also are receiving societal standards that are not even reasonable. The show type pit bulls are the ones considered behave and lovable, breeders to breeder talk. They are the ones who get to be pampered and all. They build reputation through dog shows by showing their talents and skills or by merely stocking (posing in the show).

This pit bull line is the ones feared while actually they should be the one getting tender loving care just because they don’t experience one. They were raised in a dark vast place, a cage enough to contain their body. Breeders of the fighting line believe that their dogs will be fiercer and violent if they won’t be able to see light often and of course other people and other dogs. So when it comes to the fight itself, their goal is to attack and kill the enemy, which is another dog that’s trained in the dark. They kill their own race to save their own lives. Wow! Now I believe breeders or us human are the ones frightening, aren’t we?

Dog fight a form of gambling

Dog fighting is another gambling sport involving animals. Just like cock-fight, a dog fight is also considered as blood sport where two animals are put inside an arena and fight until the other one dies. Cockfighting is a common gambling sport in the Philippines; also known as sabong. But nonetheless, the principle of these two games is just the same; the gamblers enjoy watching two animals brutally killing each other to save their own lives. Before any fight starts, all the gamblers place their bets on different sides, whichever they feel like betting in. Any dog that is considered champion and can still fight wins the prize of his life, the other dog who can no longer fight suffer the consequence of dying. Dogs that are severely injured don’t even get the right to go to a veterinarian because the breeders are afraid of getting caught and ending up in jail.

This kind of game is actually considered as another form of human crimes against animals. Animals, like people do have rights too but I don’t think it’s comprehensible with those kinds of people who plays with these animals’ lives. Dog fighting started thousands of years ago, yet until now, people still doesn’t recognize the value of life, either human or animal life.

In some countries that I personally know like the Philippines, organizations like PAWS (Philippine Animal Welfare Society) rescues animals. They adopt and let other pet lovers also adopt animals that they like. With this kind of programs, animal cruelty can be prevented.

It’s sad how these dogs get to be treated just like that. I know they also have feelings like us, they know how to care and love; they return the favor. I can say this because I felt it with them. In reality, these dogs are sweet! They’re too playful and will even kiss your face when they’re happy. Anyone who walks with them always feels safe because they won’t let anyone hurt their friend/owner/breeder; they’re just loyal. Just like what the pictures says, bad dogs are not born, they are raised by their owners; treat your dogs or pets good and they’ll return the favor while they are living.