More than 200 years ago, Kathmandu Valley was ruled by Malla kings who were passionate about their culture, traditions and architecture. They built numerous palaces (called Durbar in Nepali), temples (Mandir) and statues (Moorti) which still exist today; and that is how Kathmandu gets its title - The City of Temples.

Yes, it is one of the most chaotic and crowdiest places in Kathmandu. However, it is also the number one tourist destination for international tourists. Out of all the tourists visiting Kathmandu, almost 90% choose to stay and chill out in Thamel. This is because Thamel has lots of western cafes, pubs, bars and hotels which are comfortable to them.

It is fun to hang around Thamel in a rickshaw!

The streets of Thamel are full of shops and cafes which are fun to browse and barter for souvenirs. Choose from carpets and pashminas to cheap trekking gear and yak socks. The chaos is all part of the experience and it can also be observed from one of the many rooftop cafes.

2 and 3. Boudhanath and Swayambhunath Stupa

These monasteries are separated by an hour bus trip within Kathmandu Valley. They have their own distinct features but one thing in common - they teach us how to enlighten ourselves just as Gautam Buddha - the founder of Buddhism did. Boudhanath and Swaymabhunath Stupa are one of their kinds world renowned Buddhist monasteries.

Boudha (short for Boudhanath) holds the distinction of being the largest Buddhist stupa in South Asia and Swayambhu (short for Swayambhunath) is believed to have emerged from the ground itself. At the Buddhist temple of Boudhanath you can walk round clockwise. These are superb places to people watch and to learn about the cultures in Nepal.

Swayambhunath Stupa on a hilltop

Boudha and Swayambhu are must-go religious places in Kathmandu

Boudha and Swayambhu are within Kathmandu Valley in the capital - Kathmandu district. Both stupas have been enlisted in the UNESCO World Heritage Sites. Boudha attracts tens of thousands of Buddhists around the world during Buddha Purnima (full moon birthday of Lord Gautam Buddha).

With more than 500 staircases, walking uphill to reach Swayambhu is a different challenge and an amusing experience. Once on the top, we can feel peace and enlightened - at the same time the breathtaking view of Kathmandu Valley below will compel you to forget all the worries and anxieties. Try meditation in the cool breeze, to get enlightened as Buddha got it. Boudha and Swayambhu are separated by an hour bus ride and trip to other areas in Kathmandu can quickly be combined with them. 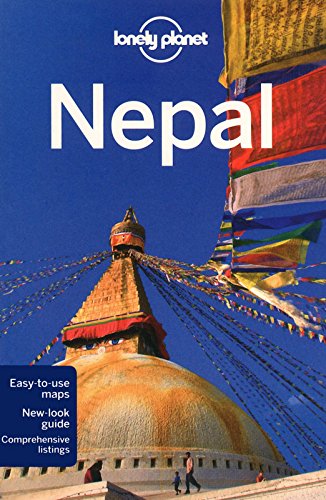 Lonely Planet Nepal (Travel Guide) Amazon Price: $27.99 $15.44 Buy Now(price as of Feb 21, 2015)
Also included are maps of major cities and tourist places in Kathmandu and Pokhara. There is also a separate guide book just related to trekking in Nepal.

If the chaotic streets of Kathmandu have got too much, then there is a heaven in the garden of Dreams. Enclosed behind a wall, this beautiful garden is the ideal place to walk or relax in the shade with a book.

Some beautiful pictures of Garden of Dreams:

Fun Fact: Don't be surprised if the Kathmandu residents have no idea there is a place called Garden of Dreams. It's not been too long since this place was renovated and rebuilt. I, myself, came across to this beautiful garden 1 year ago!

5,6 and 7. Durbar Squares of Kathmandu Valley

Patan Durbar Square is famous for Krishna Mandir, ancient stone taps and museums. In Lalitpur City, it is also called "Patan Dhoka". Bhaktaur Durbar Square attracts many because of its 55-window palace and The Nyatapola Temple (Five Storey Temple) which is the tallest temple of Nepal.

Durbar Squares are UNESCO World Heritage sites and the seats of the old royal palaces. The carvings of the buildings are exquisite and it is fascinating to wander around and take in this architectural gem. Don’t forget to walk through the markets in the surrounding streets where all manner of trades and stalls can be seen.

There are over 120 Hindu temples in Kathmandu - all big and small. However, not all are tourist places. Big tourist temples and all these religious places are within 8-9 miles range. One can visit all the places within 2 days.

Get a Kathmandu City Map and travel Kathmandu with ease.

8 and 9. Pashupatinath Temple and Chittapol Statue of Lord Shiva

A sadhu in Pashupatinath Temple

The biggest Hindu temple of South Asia - Pashupatinath and the tallest statue of Lord Shiva in Chittapole, Bhaktapur attract more than hundred thousands of Hindu devotees and pilgrims every year. Most of the visitors are from South Asia including India and Sri Lanka, the number is in hundred thousands every year on MahaShivaratri (the birthday of Lord Shiva). While Pashupatinath temple has been enlisted in the UNESCO World Heritage Site, Chittapol has not yet been listed.

Pashupatinath Temple as shot from the tourist viewing spot

Tourist Places in and around Kathmandu

Do not miss this best tourist place of Kathmandu!

Technically, it is not in Kathmandu, but the point of origin for this once-in-a-lifetime opportunity is. Mountain flights to the Himalayas in the north-east of Kathmandu are in the mornings - typically starting 7 AM. This is the time when the weather is clear and you can enjoy the view of morning sun shining on the white snowy Himalayas.

One of the important assets and beauties of Nepal is the mighty Himalaya range of the world’s highest mountains. Mount Everest (8848 meters) in the Sagarmatha zone of Nepal is the highest mountain of the world. Not only its height, but its beauty, might and charm has attracted thousands to conquer and reach its summit. Some have become successful in reaching the top and some haven’t. Some were not lucky to have lost their life. But I’m one of the lucky ones who has experienced the beauty and touched it. Although not with my body, but yes - with my heart!

View of Mount Everest from the plane

You are literally "THIS" close to the Everest!