Did you know that you can plant a garden outside in the winter?  A cold season garden is not only easier to maintain, it is also a great way to get fresh produce in the fall and winter!  If you already have a gardened area from the summer, you can even use the same plot.  Till it over to loosen the dirt and add a bit more compost to freshen up the mineral content.

What kinds of vegetables can you plant?

The varieties can vary depending upon which USDA hardiness zone you are in, but the general idea is that root vegetables thrive in the colder months, as do most of the leafy greens and headed vegetables like Broccoli, Cabbage, and Cauliflower.  In fact, the largest heads of cabbage are typically harvested in Alaska.

Here is a list of the more popular winter vegetables:

When do you Plant?

Usually a winter garden is started in August.  With that being said, some plants have such a long harvest time that I plant them sooner.  Parsnips are the perfect example.  It can easily take 6 months to grow, and they taste best after the first frost.  I tend to plant Parsnips in early July.  Other plants are more sensitive to heat, like kale and lettuce.  Kale has approximately 45-60 days to harvest and lettuce 30-45 days.  Both of those should be planted no earlier than August.

This year we are having a particularly late summer garden because of very late frosts and storms in the Midwest.  We had frosts well into May and numerous bad storms around the same time.  Between those two events, most of the local early crop was ruined. Because of the delay I will be planting my winter garden late this year to give the old tomatoes and peppers plenty of time to fruit.

When do you Harvest?

With a good variety of vegetables, you can harvest steadily throughout the season.  Radishes have the shortest harvest, with only a month needed of growth.  So planting radishes AND turnips at the same time means that you get a harvest of radishes and then 2 weeks later a harvest of turnips.  The same thing can go with lettuce and kale.  Planting them at the same time would yield lettuce one week and then kale a few weeks later.  Kale can be continuously harvested and the same can be said of the “loose leaf” variety of lettuce.

If you start planting the leafy vegetables and the root vegetables in August, you will see them start to mature in early October.  Plant them in batches in August and September and you can have a longer harvest.

With carrots and parsnips, you have the wonderful option of leaving them in the ground as long as you want.  Parsnips and carrots grow sweeter with the cold weather.  Because of that, many avid parsnip fans will plant 20-30 plants and then pull only 1 or 2 as needed.  You could have parsnips and carrots well into February.  Both have relatively long growth cycles so expect these guys to be officially ready for picking around Thanksgiving.

Protecting Your Winter Garden with a Cold Frame

While the crops that you grow are suitable for the cold, you do still need to protect them from the frost.  It can be done inexpensively with some PVC pipe and plastic.  There are numerous sites with DIY instructions on building the cold frame.

You can also buy a pre-fabricated rigid structure from Amazon, Lowe’s, or Home Depot.  They are relatively inexpensive and spare you the effort of having to build it yourself.  The frames have lids that lift off so you can water and pick from your garden.

I know winter vegetables do not have the seasonal nostalgia as a fresh beefsteak tomato, but these vegetables are ten times more delicious from a home garden than a grocery store.  Give it a try! 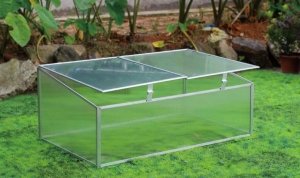 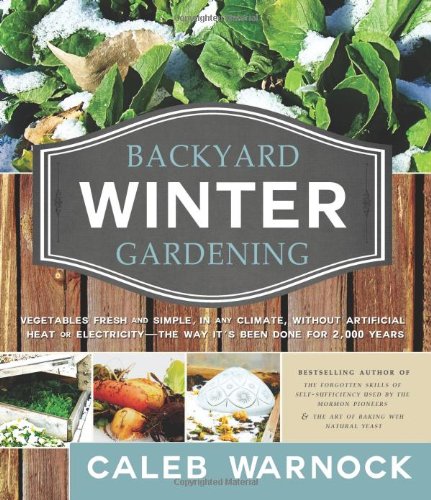 Backyard Winter Gardening: Vegetables Fresh and Simple, in Any Climate Without Artificial Heat or Electricity the Way It's Been Done for 2,000 YeAmazon Price: $18.99 $11.34 Buy Now(price as of Jul 27, 2013)
Next >> How to Keep Raccoons Out of the Garden - Don't Let Your Yard be Their Midnight Buffet