Thank you for reading! Hope this article was of great use or entertainment for you! If you have the time, check out my other work! Follow My 'Guitar Tip of The Day' Twitter! Essential Things to Know BEFORE Learning Guitar My E-Mail for FREE Guitar Lessons & Help: KarmaMusic42@gmail.com
InfoBarrel is a writing platform for non-fiction, reference-based, informative content. Opinions expressed by InfoBarrel writers are their own.
InfoBarrel > Entertainment > Games

How You Can Play Retro Video Games Online Free!

Who doesn't yearn for the days of a simpler time? Where cell-phones were for the rich, computers that had the memory of our modern flash-drives, gas was cheap, jobs were abundant, and of course, retro video games.

I was recently reading an article on the website of the 'Alternatives to Steam For PC Activists'. To my pleasant surprise, there were many ways to enjoy whichever video game you want to play that Steam doesn't provide. But, it also surprised me by not mentioning a website that allows people to play essentially ALL of the games that were once available for old consoles. Ranging from platforms such as SNES, Atari 2600, Sega Genesis, PS1, Nintendo 64, and even the most recent gaming consoles, the library to choose from is packed to the brim!

The website is called Vizzed.com, it is not only completely free, but also quick and easy to use. Currently, there are over 3,600 games and that is only the retro games! It also contains 48,000 playable games for Xbox, PS2, Wii and other more recent gaming consoles. You don't need an emulator, as a few years ago one was necessary to play any retro games. You don't need a controller either, you can use just your keyboard. You don't need any physical items such as the game CDs themselves, or the hardware. Best of all, you don't need to spend any money as it is all completely free to anyone who wishes to play!

What exactly is Vizzed, and how does it work?

Vizzed is a website dedicated to allowing anyone to play the greatest selection of games online, both new and old. The site also features a forum/message board for every player to socialize with one-another. The greatest thing about the message board is that  the website does not allow insulting, disrespecting, or attacking to its members, the sole purpose is to create a safe and friendly atmosphere. Also, the site contains tools, such as spyware, adware and virus free, of which prevent computer hacking or viruses.The most popular attraction of Vizzed is offering free gaming to both children and adults, who may be unable to afford them on their own, as well as preserving every classic so they are not be forgotten, and recieve the recognition they deserve.

It works by the owners having actual physical copies of each game to prevent possible copyright violations and piracy. Basically, you are 'renting' each game from the owner online making it not possible to download any to your computer. To explain that a bit further, if you were to download a virtual version of a game online through means of torrents, it would be considered piracy and violate copyrights since you do not physically own the game nor have you paid for it from someone who does own the game. By them owning each game, they are essentially acting as a Blockbuster store, but renting the games out for free .

There is one 'catch', if you consider this  a 'catch', the games are indeed free, but require the online currency called 'Viz'. Viz are your credits that you use to play what it is wish, they do not require any real money to buy, and are easy to obtain.

What do I need to do to play a game?

There are just a few other things to know before you start gaming. As you may have noticed, I was using a keyboard as my  controller, and you can do this with every game, but you can also plug in your Gamecube, Xbox or PS2 controller! If you do not have an adapter, you may want to go with the one below. 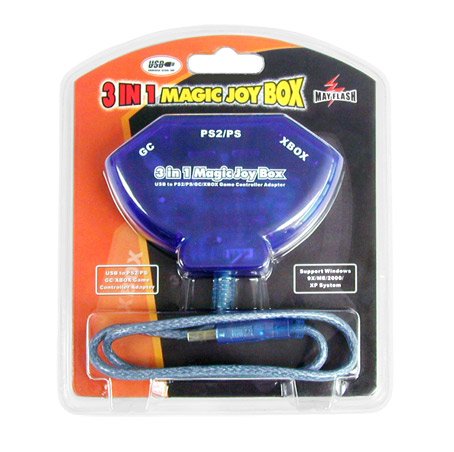 MAYFLASH 3 in 1 Magic Joy Box For Pc Amazon Price: $12.94 Buy Now(price as of Jul 10, 2016)
"Plug in an Xbox , PS2 or Gamecube controller into the adapter and it will ten allow you to plug it in via USB port and useable for online games!"

There are also some games which require a plug-in, that you can download here. Most retro games do not need the plug-in to play, mainly the newest ones. Before you play, the website will say whether or not it requires the plug-in . The  only downside to this plug-in is if you are on a Mac OS X, as the plug-in is not available for Mac computers, but you can still play all of the others that don't require download anything ! So the website is Mac friendly until you find a game that you need to download the software for it to work, though you can always run a Windows operating system on a Mac using proper software, in that case they will work on a mac.

As mentioned earlier, there is an online currency for the website called Viz. It is free and very easy to obtain. Just by logging into the site each day, you will receive 100 Viz. There are many other easy ways to get more Viz such as, posting on the forums, referring friends to the website, and a few other ways. An entire page explained what Viz is, how to earn more, and what it can be used for can all be found here

Finally, the last feature to bring up is the ability to save your progress! That's right! When I have used in emulator in the past, I was never able to save my games and the progress, making it difficult to play and beat games, but with Vizzed you are able to save where you are currently at ! Any game that you choose, you will be able to stop playing at any time, save , shut off your computer, and it will still be there when you return.

In summary, this is an incredible website for those who wish to play games for free, both retro and new games. The nostalgia will be very satisfying on it's own, being able to play any game from your childhood all through an internet browser. Vizzed allows you to simply play a game by searching and clicking it, which then opens a widow with your game. Not only can you play on both Mac and PC, you are able to connect Xbox, PS2, or Gamecube controllers into your computer and they will be compatible with each video game. The selection is tremendous, with over 50,000 to pick from.

This website overall is simply amazing. Free, quick and easy and thousands of games at your disposal. Now, get over to that website and start playing those games you have missed so much!