I am a retired teacher of English as a second language. I teach on line via Skype, and write on-line articles which reflect my love of travel, language, literature, history and culture. I love writing for InfoBarrel. Why not join me by signing up here: http://www.infobarrel.com/signup.php
InfoBarrel is a writing platform for non-fiction, reference-based, informative content. Opinions expressed by InfoBarrel writers are their own.
InfoBarrel > Entertainment > Games

A great weekend pastime is getting together with a group of friends for a game of darts. My husband, myself and several other couples have been meeting once a month for more years than I care to remember.  In all that time we have celebrated the birth of babies, watched our children grow up and lost a member to cancer. And we still get together to gossip, to reminisce, to have fun together and, of course, to play darts.

Sometimes referred to as “poor man's archery”, darts is a British working-class pub game with origins that are lost in the mists of time. No-one knows where the game originated but it probably began when some bored medieval archers decided to throw some arrows at a target instead of firing them with a bow.

Over time the equipment evolved. The arrows became much smaller and the concentric rings of the original archery target (shown above) were divided up into pie shaped divisions1.

The equipment needed to play darts is fairly simple and inexpensive. All that is required is a set of darts for each player, a dart board, and a board for scoring. Pubs generally provide a blackboard and chalk for dart players, but if you are playing at home you can also use a whiteboard and board markers. An optional extra is a dart mat to indicate where the players should stand, although you can also simply mark a line on the floor with tape.

A regulation dart board is made of bristle and measures 18 inches (45.72 cm) in diameter. As shown in the diagram below, it is divided into twenty pies, and each pie is assigned a specific value between one and 20, with 20 at the 12 o'clock position and the other numbers in non-sequential order around the board. There is an outer ring, the double area, an inner ring, the triple area, a central circle, known as the bulls eye, and a small inner circle, which is known as the double bull.

There are three darts in a set. Darts consist of metal shafts to which a flight is attached. These were traditionally made of feathers but are now made of man-made material. The cheapest darts have a fat brass shaft and a heavy plastic flight. More expensive and more durable darts are made of nickel/silver, tungsten or nickel/tungsten. Because these metals are denser than brass, they will have a slimmer shaft and much lighter flights.

Electronic dart boards use soft tipped darts and a rubberized board, but die hard dart players will have nothing to do with such a newfangled gimmick because they do not consider this to be “real” darts.

Setting up the Board

The dart board should be mounted on the wall so that the measurement from the floor the the center of the bull's-eye is 5 feet 8 inches (172.72 cm). It should be flush to the wall with the “20” at the top. The scoreboard is generally hung at the side of the dart board.

The throwing line or oche is where players stand to throw their darts. The regulation distance for men is 7 feet 9 ¼ inches (236.89 cm) or 8 feet (243.84 cm) for soft tip darts. Ladies are allowed to stand a little closer, and the “ladies line” is generally set at 7 feet 6 inches (228.6 cm). The oche can be indicated by placing tape on the floor. You can also buy a commercial dart mat like the one below which is marked with the various throwing lines3.

Each player takes it in turn to throw their darts at the board, calculate their score, and write it on a scoreboard.

Scoring is based on where the dart lands. A dart in the 10 pie will obviously be worth 10 points. If it hits the double 10 area (the outer ring) the dart will score two times 10 or 20 points, and if it hits the triple area (the inner ring) the score will be three times 20, or 30 points. The outer bull is worth 25 points, and the inner bull is worth 50 points.  The highest score possible with one dart is triple 20 (60), so the highest possible score on one turn is three double 20s, or 180.

A dart does not score if misses the board, falls out, or sticks into the tail of another dart, a rare occurrence that is known as a Robin Hood shot, which is shown in the video below. 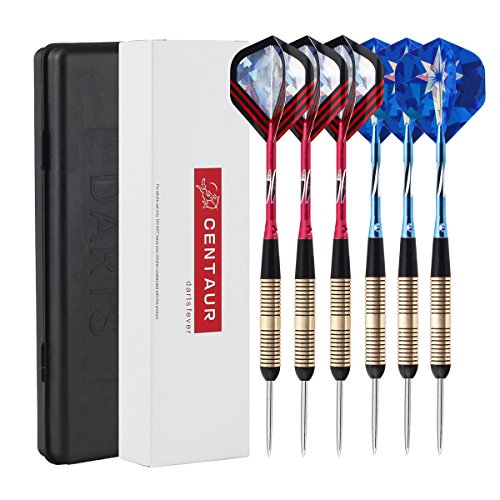 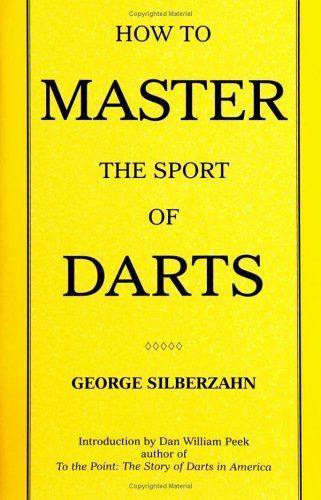 This is a simple game which beginners can play to improve their shooting accuracy. Players try to hit each of the numbers in order from 1 to 20. The first player to reach 20 is the winner.

This is the classic dart game which is played in pubs, dart leagues and championships.

It may be played by individuals or teams. Each player or team marks 501 on the scoreboard. The winner is the first to reduce their score to zero. Players cannot begin scoring until they hit a double, which will be their first scoring throw. This is known as "doubling in." Once players have doubled in, they deduct the points earned on each throw. The winning player or team must "double out", or end the game on a double. If a player or team has 40 points left, for instance, he can end the game by scoring a double 20.

If there is an odd number left, the player needs to  make it even by scoring a single odd number before doubling out. For example, if there are 39 points left the player can finish by hitting a 9 and then a double 15.

The length of the game can be changed by using a different starting number. For a shorter game, play can start at 301. Longer versions are 701 and 1001.

This is a more strategic team game. The numbers 20 to 10, T (triple), D (double) and B (bull) are written down the center of the scoreboard. When team members hit a number, T, D or B, they mark an “x” on their team's side of the board against the number hit. When a team obtains three x’s they can score points on that number until the opposing team “kills” the number by getting three x’s on the opposing side. Triples and doubles may be taken as thrown or as multiple single numbers.  The game ends when all the targets have been “killed”. The winner is the team with the most points.

There are many more ways of playing darts. In the course of writing this article I found a website that gives the rules for 47 different dart games many of which I have never heard of4.

So if you are looking for a fun activity that will provide a great evening of friendly competition, get out the drinks and snacks and plan a lively evening of darts.