Lobster is regularly thought of as a rich man's food and while it's true it's not cheap, it is probably within most people's budget at least as an occasional treat or indulgence. The small lobster tail used in this recipe cost £6.00 (yes, six British pounds or around $9 US!) but prices will vary depending upon location and product availability. If you do go to the expense of buying a lobster tail or whole lobster, it's of course especially important given the price that you take great care to prepare and cook it appropriately but the good news is that the process is in no way difficult.

Tucking in to potted lobster tail

While this finished dish will keep in the fridge for a couple of days after it is prepared, as with all seafood, it is important to buy and cook the lobster as fresh as is at all possible for best results.

There is a very quick, easy and extremely accurate way of calculating the required cooking time for a lobster tail portion using its weight in ounces. It should simply be simmered for one minute per ounce in weight. If you don't have kitchen scales similar to the ones shown, you will have to take the weight perhaps from any packaging in which the tail is contained or ask in store for it to be weighed on your behalf. Don't guess - you are likely to under cook or even worse over cook the lobster tail considerably, in the latter case rendering it effectively inedible.

How to Poach a Lobster Tail

Poaching water with seasonings and flavorants is brought to a simmer

The lobster tail should be added to already simmering water, not cold water. Begin therefore by adding the sliced onion half, the bay leaf, the whole peppercorns and around half a teaspoon of sea salt to a pot with enough water that will comfortably cover the tail when it is added. Put the pot on to a high heat just until the water starts to simmer.

When the water reaches a simmer, reduce the heat and add the lobster tail. It will almost immediately change color from brown to red. Maintain as gentle a simmer as you can for the determined cooking time. Do not let the water boil.

When the cooking time is up, carefully scoop the lobster tail from the pot with a large slotted spoon. Lay it on a plate, cover it and leave it to cool completely. Put the lid on the pot and leave the stock also to cool.

How to Remove the Shell from a Poached Lobster Tail

Scissors are used to cut through lobster shell

It's incredibly easy to remove the meat from a lobster tail using only a pair of small or medium sized kitchen scissors like the ones shown above. All you do is begin by holding the tail underside up in the palm of your weaker hand. You will clearly see a number of tines or spars connecting the two sides of the shell and running perpendicular to the sides of the shell. Very carefully, snip through each of these tines in turn. If you are serving the lobster tail meat whole, you need to be extra careful not to damage the flesh and affect presentation. Where the meat is to be subsequently chopped up (as in this instance), that factor is clearly not so important.

When you have snipped through all the tines, you should easily be able to pull the two halves of the shell free of the meat. 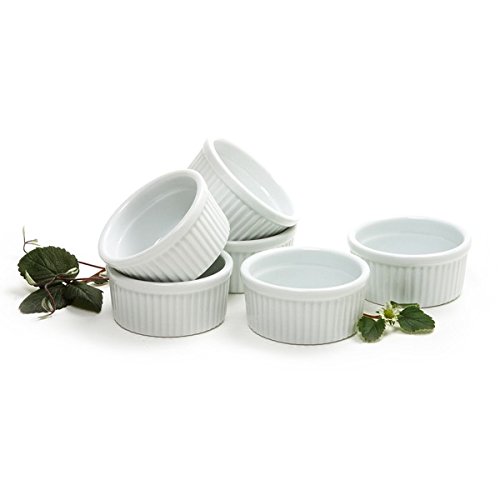 Norpro 6 Piece Porcelain Ramekin Set Amazon Price: $14.99 $8.99 Buy Now(price as of Jun 4, 2016)
If you intend preparing this potted lobster tail recipe or indeed anything similar, you will obviously need appropriate dishes. These little ramekins are probably the most multi-purpose items found in my kitchen. You will find there is virtually no end to the different ways in which they can be used in both food preparation and presentation. Don't have a set? You can pick them up at a very reasonable price on Amazon and they should last for many years if cared for properly.

How to Pot the Lobster Tail

You will need a setting agent when preparing this recipe and I always use leaf gelatin for what I find are best results. Be sure to read the instructions on the pack you buy but only use half the recommended number of sheets for the amount of liquid stock. This is because you want only a light set as an end result. This gelatin required the leaves be soaked in a bowl of cold water for three or four minutes only before use.

Strain the cooled stock through a fine sieve suspended over a large bowl. You may well be left with up to a couple of pints of stock but clearly nothing like that quantity is required in this recipe. Using only one sheet of gelatin required half a pint of stock so that was carefully measured out and added to a small saucepan. The rest of the stock (don't waste it!) was put in an appropriate dish and frozen for some future use in a suitable seafood dish.

Bring the measured out stock to a simmer. Turn off the heat and leave it to cool slightly while the gelatin soaks and you pot the lobster tail mixture. The reason for letting it cool slightly is that if you add gelatin to a boiling liquid, you are likely to adversely affect its setting properties.

Lobster meat is combined with seasonings and spices

Chop the lobster tail fairly finely and add it to a bowl with the red chili and cilantro/ coriander leaf. Season with salt and white pepper and stir well.

Lobster and seasonings are added to the ramekin

The lobster tail combination should be spooned in to a ramekin. Don't press it down too much or you may prevent the gelatin enhanced stock penetrating fully in to the mix and setting it evenly. The ramekin should be approximately three-quarters to four-fifths full.

Lift the gelatine from the cold water and squeeze out as much water as you can. Add it to the warm stock and stir gently with a wooden spoon until it is fully dissolved. Pour enough stock in to the ramekin to fill level to the top and completely cover all the solids. Allow to cool before carefully lifting to the fridge to fully set overnight.

There are any number of ways in which you can choose to serve your spicy potted lobster tail. Given its likely cost to make, you may even want to remove it from the ramekin to serve more than one person in the form of canapes. Below are just a few very simple suggestions for you to consider.

Crisp and crunchy oatcakes go well with this lobster dish

As it was a Scottish lobster tail used in this recipe, Scottish oatcakes (if you can get them) make a great serving accompaniment. A little bit of the potted lobster is spooned out of the ramekin at a time and added to the oatcakes, to be eaten by hand.

Crackers  can successfully be made to accompany the lobster

Savory crackers of virtually any type go well with this dish. You could even serve it with more than one type on the plate, or arrange a separate plate of crackers to let diners have a choice at the table.

It was the spicy nature of the dish that prompted naan breads to be considered as a serving suggestion. This is a mini garlic and cilantro (coriander leaf) naan bread which should be heated per the instructions on the pack immediately before being served.

The age old favorite of simple hot buttered toast goes very well with potted lobster tail, as it does with so many other combinations. The butter is of course optional.