Today my sister and I volunteered to help clean up the riverbank of the Columbia River. She had seen a cry for volunteer help in the online newspaper and alerted me to the cause. I had seen the ad myself and didn’t want to volunteer by myself so the invitation from my sister was a welcome reason to go. We met at her apartment and carpooled because we assumed that parking would be limited due to the flood of community support.

When we arrived at the water treatment center, the only other cars in the lot belonged to the staff. I glanced at the time and saw that my sister, and I arrived a little early. A fountain was surrounded by two huge signs warning against wading or swimming in the crystal clear water. I was a little nervous that we were in the wrong location because there were no signs to indicate that a group of volunteers were expected.

Inside a group of three women welcomed us to the center and assured us that we would be starting the clean up soon, and in the meantime we were invited to partake in some refreshments. The sunshine just outside the doors beckoned and my sister, and I opted to enjoy the outdoors until the staff was ready for us.

Ten minutes slipped away, and my sister showed signs of irritation. One of her biggest pet peeves is wasted time, and we were well past the nine o’ clock start time. We walked back to the building and saw that only one other woman had arrived to volunteer. The staff hemmed and hawed about the expected fifteen volunteers who didn’t show up. My sister sighed loudly, and the staff seemed to take that as an indication that it was time to get busy.

Armed with gloves, an industrial garbage bag, a bucket for glass and needles, and a pair of “nifty nabbers” we plodded behind the intern to the riverbank. Mud and broken tree branches made the trail a comical dance of trying to stay upright. Our tiny group broke through the brush and spilled onto the sandy bank. We were warned that a couple and a lone man were illegally camping, and the police were already there to make them move on. We were not to engage with the loiterers and to pick up garbage away from their sites until they were gone.

The staff member and woman paired up to work on the inland portion and my sister, and I covered the beach. I was astonished at the cavalier way garbage was strewn under bushes and nonchalantly around the driftwood. It was if the litterer thought that garbage was suddenly biodegradable if it wasn’t readily visible. I was able to monitor where my sister was by the consistent clink of beer bottles she added to her garbage bag. It was an eerie game of Marco Polo.

My footsteps became heavier as we made our way down the riverbank. It wasn’t that I was really tired, but my tennis shoes were filling with sand like the lower half of an hourglass. My discomfort leads to composing a mental letter to anyone who is lazy enough to litter. 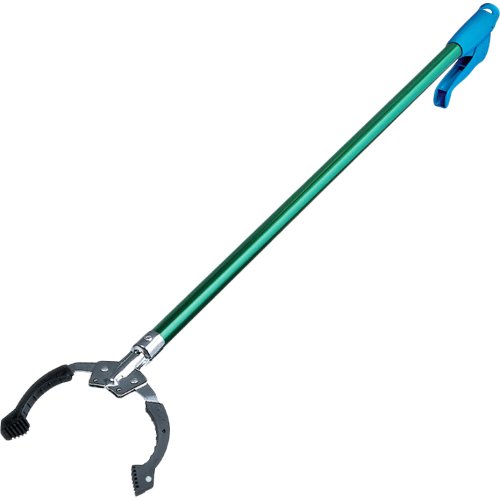 To Whom It May Concern,

If you’re thinking about littering, don’t.

The mental letter would stretch further and become more disgusted or hostile depending on what kind of garbage my nifty nabber pinched and released into the dark abyss of my garbage sack.

Some of the common finds were aluminum cans, beer bottles, candy/condiment wrappers, water bottles, and cigarette butts. The less common finds that made it into the sack were cigarette lighters, diapers, broken toys, hair accessories, and a camp chair. We paused halfway to the end of the section to clean and combined the contents of our sacks into one full bag, which was hauled out by the staff. It was so nice to have an empty bag again, and I started prowling for rubbish with renewed energy.

We were nearing the campsite of loiterers, and my sister mentioned that she could understand to the feeling of hopelessness of being homeless and not wanting to bother with cleaning up a mess. I was less than sympathetic and grumbled, “Poverty is not an excuse for being a crappy human. You still have the ability to throw away garbage.”

The couple at the site must have overheard me because the woman politely asked if she could put the garbage from their site in our sacks. Good job guys, now go be useful, responsible citizens, and please spread the word, what you pack in, pack out.

Credit: selfAs we neared the end of the cleanup, we saw three officers leading the lone man away in handcuffs. He was very repentant and understanding of why the officers had to arrest him. He loudly blessed them as they passed us picking up litter. It was a surreal experience because I don’t have run-ins with the law. Unfortunately, I was the lucky volunteer who got to clean up his site. It was a sad to me to see how some people live, but I was sharply reminded that I am only mere inches from crazy, like most of society. It wouldn’t take much so it might be a good idea to get off my high horse for a while.

At last, we reached the end of the portion of the river, we were to clean that day. I was sweaty, smelly, and ready to get the sand out of my shoes. We hefted the sacks, buckets, and nabbers on our collective shoulders and followed the leader back into the woods and to the sanctuary of calm, clean, civilization.