Find Out from Your Definitive Source : Treatment of Chronic Pain with Prolotherapy     "Do not live with chronic pain if it can be treated "
InfoBarrel is a writing platform for non-fiction, reference-based, informative content. Opinions expressed by InfoBarrel writers are their own.
InfoBarrel > Health > Alternative Medicine

Chronic pain sufferers are often looking for a way to alleviate the pain from their everyday lives. Though there can be various causes for chronic pain, if the source of the pain is in the joints, then it could very well be due to weakness in the ligaments that are holding the separate  bones of the joint together, typically referred to as ligamentous laxity.  Painkiller pills and steroids are usually not recommended for long term usage due to their well-known side effects including gastrointestinal trouble and muscle weakness. There is an alternative therapy to cure this joint weakness called Prolotherapy, which all but negates more invasive methods like surgery.  The patient also usually experiences complete pain relief, making pills unnecessary after the treatment period.

Avoiding surgery for the treatment of chronic pain

Though surgery has its place in the treatment of musculoskeletal and orthopaedic ailments, it should be taken as a last resort in most cases due to the typically long and arduous recovery process. Unless there is direct causality between the surgery and pain relief, it can be avoided.  The vast majority of cases that go into surgery can be considered for this alternative therapy saving the patient from these and other risks that go with surgery and at a much lower cost too. Prolotherapy has evolved over the years into a safe practice and is constantly growing.

Prolotherapy, which stands for “proliferation therapy” comes under the purview of regenerative medicine akin to other areas of alternative medicine like stem cell therapy. Specifically, it is a Regenerative Injection Therapy(RIT) that uses an unconventional twist of body inflammation to actually jump-start a repair process that eventually rebuilds the weakened ligamentous tissue. It is a localized treatment administered by the physician or prolotherapist. A syringe is used to inject inflammation-causing fluid, typically a sugar solution that contains dextrose, glycerol and phenol straight into the affected joint. The injection which is made into the ends of the damaged ligament where it joins the bone causes the body to respond as it would to an injury that creates inflammation. Numerous minute injections are given at a time to comprehensively treat the joint at pain spots. This is done three times with an interval of about two weeks.  The patient should not take anti-inflammatory drugs during this time.

In recovering from an inflammatory process, typically the body goes through a series of actions after the initial injury. After prolotherapy the tissue cells swell and break-up, thus attracting cells called granulocytes that repair tissue. Meanwhile, immune cells known as macrophages clean up damaged tissue. There is increased blood flow to the damage site during this activity which occurs throughout the first week and is known as the period of inflammation. Next comes the fibroblastic period during which new blood vessels form and fibroblasts(tissue repair cells) form new collagen. This activity actually starts in the first week already and continues for another six weeks or so. Under the maturation period, the fresh tissue will strengthen and mature together with the new blood vessels formed. This is the time when one feels the chronic pain beginning to subside and allow more freedom of movement. The strengthening and improvement in collagen structure continues from the sixth week for up to two or three years. In most cases, there is significant if not complete pain relief.

What can be treated?

Nearly all the musculoskeletal joints in the body can suffer from injury to the ligaments or tendons arising from sports, accidents, degeneration, overuse or simply overstretching.  They can be treated with prolotherapy if the cause of pain is ligament laxity. These are such as the shoulder, elbow, knee, wrist, ankle, back, neck, pelvic and sacroiliac joints.  For example, a frequent complaint from patients is back pain. In many cases,  regular or excessive strain on the back leads to laxity in the ligaments holding the spinal vertebrae together, compromising the strength and stability of the spinal column.  This in turn puts pressure on the spinal discs between vertebrae which then start to degenerate prematurely.  Prolonged disc degeneration impinges the spinal nerves and causes pain, which is sometimes debilitating. For most cases, prolotherapy will return the strength and support of the ligaments and prevent further degeneration as well as arthritic growth. It is worthy to note that though the overall period of recovery is long, most patients are able to go back to a normal life and be as active as they used to be physically.

Prolotherapy has been in use from the 1930s. Modern day prolotherapy which was originally introduced by Hackett and Hemwall in the 1950s and largely popularized in the USA has evolved into other forms of prolotherapy as well and may be pursued with the right medical advice based on your condition . It may yet open another door for you as a way out of chronic pain. You don't have to live with it. 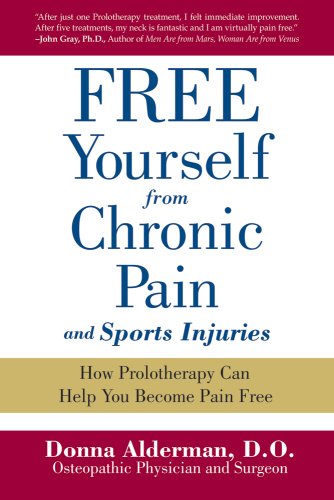 Free Yourself from Chronic PainAmazon Price: $19.95 $15.98 Buy Now(price as of Feb 2, 2014)
This book details Prolotherapy as a definitive treatment for chronic pain from the foremost authority in the field.
Next >> Spices as Medicine: 8 Spices with Healing Powers