Banoffee pie - A simple dessert that is enjoyed by the whole family.

If you are a lover of home baked goods but don’t want to spend too long in the kitchen preparing something yummy then this quick and easy recipe is perfect for you. Being a stay-at-home mom with young children I don’t find the time to spend hours baking but I still love to treat guests in my home to something tasty. It feels great to serve up something I made myself. During those play dates the parents gobble up this treat leaving no seconds or leftovers behind.

Approximately 1 hour (includes time for the pie crust to cool)

Credit: SudocreamFirst crush the tennis biscuits finely. I also like some chunky pieces in my base it’s your choice how much you would like to crush the biscuits. Then melt the butter in the microwave and add it to the crushed tennis biscuits. Make sure that the butter mixes well with all the crushed biscuits. Use a greased tart or pie dish and press the biscuit mixture into the base of the dish. Smooth it out creating a lovely crust base. You may prefer to use a pie tin from which you can remove the tart once completed (again it is up to your personal preference). Cook the base in a pre-warmed 180 degree Celsius oven for about 10 minutes (or just until the crust looks golden brown and crisp). Once the crust is baked then allow it to cool completely.

While the crust is cooling cut your bananas into round slices. Don’t include the ends of the banana, as you want create uniform layer of banana slices. When the crust has cooled fully place a flat layer of the sliced bananas over the biscuit crust.

Credit: SudocreamEmpty the caramel from the tin into a bowl and mix until smooth. I simply use a fork to do this. Once the caramel has a lovely smooth texture spread it evenly over the banana slices. I place dollops of caramel all around the surface of the bananas in order to make the spreading process easier. In this way you also avoid lifting up banana slices as you smooth out the caramel.

Whip the cream with an electric hand mixer (or whichever method you usually use) and dollop cream over the surface of the caramel spreading evenly. Lastly break up some Cadbury’s chocolate flake (or any other chocolate you prefer) and sprinkle it over the cream surface of the Banoffee pie.

I generally leave the finished product in the fridge overnight before serving in order for it to cool and set firmly.

This delicious and easy Banoffee pie will be devoured by your house guests. Serve it up with some home brewed coffee for more enjoyment.

If you feel like serving little individual pies then use the same recipe but make the pie in small pie or tart tins. This will take longer than making just one pie. It does create beautiful baby Banoffee pies if you do have the extra time. 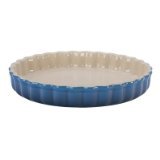 A Little History Of Banoffee Pie

Have you ever wondered where this tasty treat came from or how it came about? Often, whilst enjoying a favorite dish, I wonder for how many generations it has been made and how many changes it has passed through.

Banoffee pie was originally invented by Nigel Mackenzie and Ian Dowding in 1971. They were the owner and chef of The Hungry Monk Restaurant in Jevington, East Sussex. They adapted an American recipe "Blum’s Coffee Toffee Pie", trying a few alternatives until finally thinking of adding banana. They called it “Banoffi Pie” and it was a hit![1]

Traditionally Banoffee Pie is made from banana, condensed milk which is boiled for hours in the tin (turning into toffee) and cream with a biscuit base. The English name, Banoffee, became used to describe anything that smelt and tasted of banana and toffee.

A recipe for the biscuit based pie is often printed on Nestle’s condensed milk tins. Instead of boiling condensed milk to make toffee people often use a tin of caramel instead.

The recipe was first published in a cookbook in 1974  and again in 1997. In 1984 Banoffee Pie was being made and sold as an American pie in supermarkets after the recipe was  adopted and used in restaurants throughout the world.[1]

There are other variations of this English dessert, for instance it is often made with coffee or chocolate. Personally I enjoy mixing it up a bit and adding a peppermint edge to the pie. This then becomes quite similar to peppermint crisp tart however it has the added banana flavor.

For this particular version of Banoffee Pie follow all the instructions as described in the method for making the pie. But before smoothing the caramel over the bananas add some crushed mint aero chocolate. You can crush the chocolate into the texture you prefer. I enjoy a mixture of fine and chunky mint aero pieces. In order to gain this texture I simply crush room temperature chocolate with my fingers. An alternative could be to grate the chocolate with a cheese grater. I recommend using a cold chocolate from the fridge if you choose the grating method. You could also use Nestle peppermint crisp chocolate as an alternative peppermint flavored chocolate. Continue with the instructions in the above recipe and you have a nice minty twist to the pie.