Technology continues to develop to offer consumers new options to perform tried tasks.  Services that have been around for years and used by consumers for years now have cutthroat competition and it has a lot to do with the rapid advancement of technology.

Just like with so many new businesses and companies, when something new hits the market the business or company will lowball their price to help drum up business.  There is a new company that has hit the Internet market and it offers a dirt-cheap Internet televison service that seems to give satellite TV, cable TV and live TV a run for their money.  Rabbit TV is an Internet based television service that only cost $10.00 a year but for a limited time of course.  Rabbit TV gives you access to hundreds of TV channels, thousands of TV shows, thousands of movies, thousands of news channels and thousands of music stations too.

Learning new ways is a bit time-consuming but as most of us know, trying and learning new things usually ends on a positive note.  It took me a couple of afternoons of connecting cables and learning how to use the new service but the time spent learning will now save me hundreds of dollars a year.  My goal is to cancel the television service provider I pay about $30.00 a month towards, buy an antenna to receive 25 + channels for free and when I'm ready to watch a movie, educational show or a special news channel I'll turn on the Rabbit TV to watch it.  Cancelling the TV service provider that charges me $30.00 + a month will save me a few hundred dollars a year.

Internet radio available through Rabbit TV is just as good as satellite radio.  There are over 50,000 radio stations from twenty-seven directories.  Why pay a monthly fee for satellite radio when you can have it for $10.00 a year.  You can also watch music videos too.

I recorded videos to give people an inside view of the Rabbit TV.  In the first video I navigate through the Rabbit TV website for people to see the thousands of choices they have to choose from, show the Rabbit TV in action for people to see how it works and display the accessories I bought from Amazon that let me connect my computer to my high-definition television set.  In the second video I show how to start the Internet television on the computer to play on my television set and show how to transfer the audio from the computer to work on the TV too.  With a little practice you will be able to watch Internet TV on your high-definition television set before you know it.  I hope the videos help you along the way to update yourself with new modern technology practices that can save you hundreds of dollars a year.

You can pay less and get more by adjusting your viewing habits.

Watch Internet TV on a TV 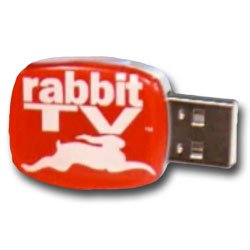