Rabbit stew for me should always be pretty basic, rustic, even old-fashioned, and never over complicated by modern cooking techniques or practices. This is probably in the largest part due to my early childhood memories of my Gran chopping the rabbits and the pieces of mutton for the huge family stew pot and the resulting delicious dish which I remember with so much love and warmth. It is also due to the fact, however, that I think rabbit is such a subtly flavored meat, this flavor should never be overwhelmed by unnecessary additions.

There are any number of ways in which you may obtain a rabbit for making your stew. It may be that you or a friend hunts it, it may be that you buy it online, or it may be (as in this particular instance) that you buy it from a local butcher licensed to sell wild game. If you have any concerns about cleaning/preparing the rabbit for the pot, don't hesitate to ask this be done on your behalf and that all you have to take care of is the cooking. I get rabbits from all three sources depending upon what suits me at the time but in this instance I bought it whole and semi-cleaned from a local supplier, so I will show the necessary preparation procedures from that point onward.

Pelted and gutted rabbit is ready for chopping

This rabbit came pelted and gutted but still had the head attached as well as many of the inner organs - such as the liver and kidneys - in place. Often, I will use the offal to make an appetizer or starter by frying them up in some olive oil with garlic and sage and serving them on toast. In this instance, I didn't choose to do so and ultimately discarded it along with the head. Either way, begin by cutting them free from the belly cavity and setting them aside.

When you are chopping up a rabbit, chicken, turkey or whatever, you can of course use a very sharp and sturdy knife. I would always recommend however using a Chinese style cleaver as they are not only easier to hold, they are easier to work with and get the job done far more quickly and effectively. 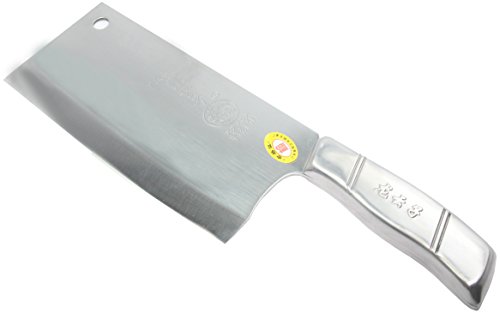 Heavy Duty Cleaver, Chinese cleaver,Butcher Knife /Chef Knife,Heavy Duty Meat Cleaver G01 ... Amazon Price: $14.99 Buy Now(price as of Feb 20, 2016)
Top quality cleaver to suit all your kitchen needs with the added benefit of a 30-day money back guarantee should you not be 100% satisfied

Lift one of the hind legs with your weaker hand and use your cleaver to cut carefully through the flesh all the way around its joint with the main body of the rabbit. Pull the leg gently back against its natural direction and use the cleaver to help you pop the joint and pull it free.

Remove the other three legs and the head in exactly the same way and sit them aside in a large, deep holding dish.

With smaller rabbits than this one, you can get away with simply chopping the main body roughly in half to separate the saddle from the ribs and shoulders at the visibly obvious point. This slightly bigger rabbit caused me to cut the body in to four approximate quarters.

Put the butter in to a very large pot or ideally a Dutch oven and put the heat on to low to start it melting.

Add the flour to a large bowl and season well with salt and pepper. Give the bowl a careful shake to dispense the seasoning.

You will have to brown the rabbit pieces in two batches and I started with the legs. Dredge them in the flour and ensure they are coated all over before laying them in the melted butter. Increase the heat slightly under the pot.

Rabbit legs are turned to brown on their second sides

After about a minute, turn the legs in the pot with cooking tongs to brown on their second sides.

Browned rabbit legs are removed to a holding plate

The larger hind legs in particular should be held briefly with the tongs to allow them to brown on their sides before they are removed temporarily to a large holding dish or plate.

The rabbit body portions should be dredged in the flour and browned in the butter in the same way.

Mutton pieces are dredged in flour

The reason for adding the mutton to the stew is twofold. While it does impart its own rich flavor to the dish, the main reason for its inclusion is its fatty composition which helps to keep the lean rabbit meat juicy and tender during cooking and on the plate. The mutton should be chopped to bite sized pieces, floured and also browned in the butter.

Remove the browned mutton to the dish with the rabbit while you prepare the vegetable ingredients for the stew.

Vegetables for rabbit and mutton stew

The vegetable components of this stew are almost infinitely variable. Other staples which you could perhaps consider would be parsnips and rutabaga (Swede turnip).

Sauteing the vegetables in the last vestiges of the butter

Peel and slice the onion. Wash, trim and chop the carrots and celery sticks. Saute all of them for a couple of minutes in the butter.

Mutton stew should be brought up to a simmer

Put the rabbit and mutton pieces back in to the pot, along with a tablespoon of the seasoned flour previously used when coating the meat for browning. The flour will help to thicken up the stock/gravy. Pour in the chicken stock, stir well and turn up the heat until the stock just starts to simmer. Reduce the heat to a level which maintains the simmer, put the lid on the pot and leave to cook for an initial one hour and forty-five minutes if using a Dutch oven or cast iron cooking pot, two hours if using a conventional pot. 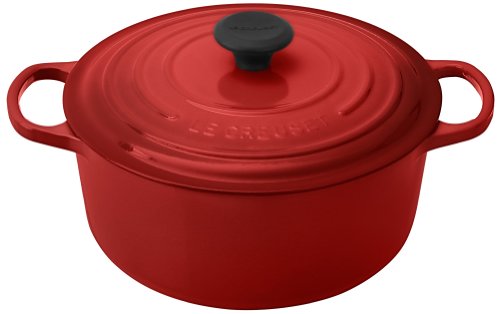 Le Creuset Signature Enameled Cast-Iron 5-1/2-Quart Round French (Dutch) Oven, Cherry Amazon Price: $400.00 $270.00 Buy Now(price as of Feb 20, 2016)
A good quality Dutch oven or cast iron cooking pot is not inexpensive but for anyone in the habit of regularly preparing stews and casseroles they pay for themselves many times over in terms of the quality of meals they can provide. The intense heat these pans reach means the food cooks not only more quickly but seemingly more intensely to a succulence aluminum pots or pans just cannot achieve. It's not an indulgence you will ever regret.

Potatoes are added to rabbit and mutton stew

When the initial cooking period is up, wash the potatoes very thoroughly but leave them whole and unpeeled. Add them to the stew, bring back to the simmer, cover and cook in the same way for a further hour.

At the end of the cooking time, stir in the two tablespoons of freshly chopped parsley. Turn off the heat completely, put the lid back on and leave to sit for fifteen minutes.

Rabbit and mutton stew is ready to serve

The fifteen minute "resting" period is not essential but I honestly believe that, just like resting a steak, it does in some way help the meat to be served more tender.

Rabbit and mutton stew solids are lifted to serving dish

A large slotted spoon is needed to lift the rabbit, mutton and vegetables to an appropriate serving dish. Some of the stock is then spooned over the stew before the ensemble is garnished with some more freshly chopped parsley.

Serving of rabbit and mutton stew

The dish may now be carried to the table for the diners to help themselves with a serving spoon.