Rap Therapy: Treatment For Our Youth?

Many young and adolescent African-American people are battling different types of psychological disorders. These range from depression to serious mental illness. Over the years, there have been many different approaches to attempt to treat these disorders.

Counselors and mental health care professionals must be mindful to avoid engaging in communication which appears to be condescending or patronizing. It has been reported that non-traditional therapies, or therapies that are not widely used within the field of mental health, are effective ways to help serve African–American youth. It has been determined that traditional counseling models were reported to have led to discomfort and misdiagnosis among adolescents of color. Three traditional therapeutic approaches that are most commonly used today, are Person Centered Therapy, Cognitive–Behavioral Therapy, and Psychodynamic Therapy.

Even though these approaches have been, and still are efficacious in treating clients who are suffering from distress, they are sometimes not the best approaches to use within the African –American population. To explain, Person Centered Therapy uses a very non-directive approach, which may be ineffective for African–American adolescents who may be more comfortable with more structured and problem–solving approaches. Also, studies have shown that adolescent clients of color perceived counselors who used non–directive approaches as being disrespectful or unhelpful. Cognitive–Behavioral Therapy which focuses on thought processes and behaviors were shown to have not stressed the importance of the effects of historical events and situations such as racism, discrimination, or slavery, which explains why this approach was not very useful when working with this targeted group. Lastly, the Psychodynamic approach has not been as successful as non–traditional approaches when counseling this population, due to clients lacking willingness to speak aloud and releasing inner conflicts.

On the other hand, non–traditional therapeutic approaches such as music therapy, poetry therapy, and rap therapy have also been reported to be significantly efficacious when working with this population. To begin, poetry therapy is a form of creative arts therapy, which allows clients to recognize and express certain situations and meaningful life experiences. This technique is also beneficial for clients, because it has been shown to have relieved psychological inner conflict as well as stress. Rap therapy is a form of poetry therapy, which can be conducted in either an individual or group setting. This approach is used to alleviate issues such as symptoms of grief, behavioral problems, and emotional discomfort. This form of therapy consists of either the client, creating their own rap music, or both the client and counselor listening to certain rap songs that may convey a meaning or message that relates to the client’s issues. This type of approach also positively influences behavior among youth and provides guidance towards living fulfilling and successful futures. Who knew that such enjoyable activities such as listening to music and writing poetry could actually attenuate stress and emotional pain? 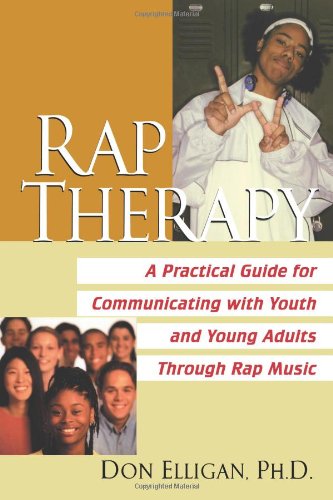 Rap Therapy: A Practical Guide for Communicating With Youth and Young Adults Through Rap Music Amazon Price: $15.00 $2.45 Buy Now(price as of Aug 27, 2014)
Next >> Preventing Medication Errors