This article was written by Cheryl Weldon, MA.  If you would like to read further writings by Cheryl visit her website:  www.cawworldwide.com Infobarrel is a great place to publish your work and has a wonderful community of writers.  If you would like to wite for Infobarrel sign up here. (you also need an account to comment on articles, so sign up now and let us know what you think about what you're reading.)
InfoBarrel is a writing platform for non-fiction, reference-based, informative content. Opinions expressed by InfoBarrel writers are their own.
InfoBarrel > Lifestyle > Dating & Relationships

Understanding differences in the way men and women communicate can be helpful in having healthier and more effective conversations with a partner.  There are numerous books and articles that cite how many words a woman uses each day versus how many words a man uses.  According to the article in the Boston Globe, “Sex on the Brain,” these numbers vary from 50,000 to 8,000 for women and 25,000 to 2,000 for men.  One common factor is regardless of the actual number; women tend to use twice as many words as a man uses.  It comes as no surprise that women and men’s brains are wired differently.    It should come as no surprise women and men communicate differently.

A woman’s weakness can be revealed in:[1]

Common Mistakes in Communication Between Partners

Cross-communication is a common mistake in conversations between partners.  Common mistakes that men make when communicating are:[1]

Common mistakes women make when communicating with their partners are:[1]

These common mistakes in communcation can cause havoc in a relationship if left unchecked.

Best Approach to Communication with the Opposite Gender

The best approach for men to effectively communicate with women is to use a consistent and respectful approach that shows she is worthy of love; that she is cherished and safe.  This leads to more trust and greater self-esteem and independence.

The best approach for women to effective communicate with men is to use a positive approach to a man’s abilities and belief in his potential; to show him he is adequate and needed.  This leads to more trust and availability in emotions and communication.

Even in the healthiest of relationships conflict can occur.  It is rare for couples to agree on every single subject.  Any time an argument erupts, it is potential for all out war if the two parties do not “fight fair.”

Often the two parties jockey for the power position.  When fighting fairly, neither party holds the power position.  They are on equal level and debate for common ground.  Fighting fair means keeping the topic focused and past history out of the equation.  Bringing up past hurts does not allow compromise to be easily reached.  Healthy couples do not hold on to and accumulate each hurtful act or word; but instead address them as they arise if they are a concern.

The goal of partner communication is often to be “right or prove the other wrong,” however healthy couples tend to approach arguments more as discussions for compromise.  This is a “win-win” situation and leaves both parties intact emotionally.

The first step is for each partner to tell the other want they want; not what they don’t want.[1]  For example to say “I want you to remember my birthday” rather than “I don’t want you to forget my birthday.”

Use “I” statements.  When people start a comment with “you” it generally puts the other person on the defense and at that point, barriers to communication will quickly erupt.  With these two approaches to fair fighting couples have a higher probability to come to compromises without losing their sanity.

Understanding the different ways genders communicate, saying what is wanted instead of what is not wanted and using I statements will ensure more effective communication.

The copyright of the article Resolve Relationship Problems with Effective Communication is owned by Cheryl Weldon and permission to republish in print or online must be granted by the author in writing. 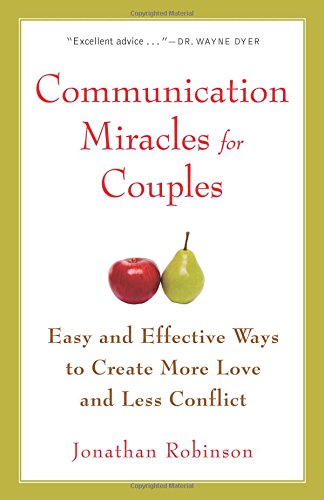 Communication Miracles for Couples: Easy and Effective Tools to Create More Love and Less Conflict Amazon Price: $14.95 $7.07 Buy Now(price as of Oct 24, 2016)
Next >> How to Infuriate Professional Musicians