The Apprentice Becomes the Master

An Order of Two

The Brotherhood of Darkness led a galaxy spanning war against the Old Republic one thousand years before Star Wars Episode Four: A New Hope and lost.  The aftermath of the war would lead to a renewed Republic, a strengthened Jedi Order, and a smaller, but more secretive Sith Order.

There isn't much to say about the one thousand year history of the Republic following the Ruusan Reformations because for the most part it hasn't been written yet.  Surely it will be expanded upon at some point, but we do know pieces of it and it deals with the Order of Sith Lords that survived Kaan's Brotherhood of Darkness and the Seventh Battle of Ruusan.  We Know that one Sith lord survived the Battle and his name was Darth Bane.

There is a book series about Darth Bane and his attempt to restart the Sith Order with a new purpose and ideology.  The series was written by Drew Karpyshyn.  It is a worthwhile series and I advise you check it out.

The point of this is that Darth Bane instituted a new policy for the Sith and it was called the Rule of Two.  The primary reason for the Sith defeat at Ruusan was that the Sith were prone to infighting.  It is the reason for many of their defeats during the history of the Old Republic while ultimately climaxed at Ruusan and ended the Sith line, except for one surviving Lord.

Bane would make it his destiny to form a new Sith Line  that would one day cause the destruction of the Republic and it's defenders: the Jedi Order.

Darth Plagueis, by James Luceno chronicles the events leading up to the election of Senator Palpatine to Supreme Chancellor of the Republic (pictured above), but focuses mostly on Palpatine's Sith master and mentor Darth Plagueis also known as Hego Damask.  The novel begins as any good story that focuses on the Sith should with the murder of a master.  Darth Plagueis seizes destiny and kills his master Darth Tenebrous during an expedition to a remote world.  He leaves the body of his master in a place that no one would ever find him on an abandoned planet.

By this point in time Darth Plagueis is well over a hundred years old and is a master of the galaxy.  He lives a secret life as Hego Damask and runs a company called Damask Holdings while also being co-chairman of the InterGalactic Banking Clan.  Plagueis is a Muun and if you have watched Episode 2: Attack of the Clones or Episode 3: Revenge of the Sith you will note that the Muuns are the alien beigns in charge of the ICB.  They will be instrumental in funding the Confederacy during the Clone Wars.

As a Muun, Plagueis/Damask is responsible for many underhanded dealings which is detailed throughout the book.  He has his hands in numerous drug cartels, trade unions, and is made out to be the mastermind behind many of the ills that trouble the failing Republic.  Plagueis realizes upon the death of his master that he will be the one to usher in the Grand Plan of the Sith set forward by Bane and defeat the Jedi once and for all.  To do this he needs a public face, a Republic Senator, to defeat the Republic from within.

The Grand Plan is Realized

The novel chronicles the life of Darth Plagueis over many years, but comes to a head when he finds his apprentice, Darth Sidious, a young noble from Naboo.  After coaching him from the shadows for several years; Palpatine realizes his destiny and joins the Order of the Sith Lords.

After tutoring him in the arts of the Sith for ten years, Palpatine will ascend from Ambassador to Senator to Chancellor.  Darth Plagueis and Darth Sidious/Palpatine begin to fund many different plots in an attempt to destablize the Republic and cause a lack of faith in the current Chancellor Valorum.  There chance will come when their scheme comes to fruition at Naboo and Palpatine is able to gather enough of a sympathy vote to ascend to being Chancellor.

The original plan was to have Plagueis act as co-chancellor, but Sidious/Palpatine who acts in true Sith fashion kills Plagueis in his sleep and thus takes on the mantle of sole Sith Lord like his master had many years before when he killed Darth Teneborus.

Each Sith Lord it seems has a speciality, or a chosen niche, within the vast field of dark side powers.  Darth Teneborus was a master of Bith science and alchemy and sought to undermine the Republic and Jedi Order by gradually phasing them out with machines and science.  Darth Plagueis sought to master life and death itself and become the immortal ruler of the galaxy with his apprentice Darth Sidious.  Darth Sidious was a master of deception and lies and his chosen field was manipulation.

The Powers of Plagueis

Plagueis was a master of life and death and could keep people from dying.  He could resurrect individuals by using the midi-chlorians to reform after death and sparkle into life and also cause them to collapse and die.  It would be these powers that would make him a master of a immortality, but he was unable in all of his years as a scientist to master his own midi-chlorians meaning that he needed another to keep himself alive because he was unable to regrown his own midi-chlorians.  This put him at a disadvantage as he needed Sidious as much as Sidious needed him.

As I outlined above, Sidious did eventually turn on Plagueis and murdered him in his sleep.  It was the first time that Plagueis slept in over twenty years too and was executed in a plan by Sidious to murder him and become the sole Sith Lord.  Sidious/Palpatine would later tell this story to Anakin Skywalker in an attempt to lure him to the dark side of the force.  This would take palce at the Galaxy Opera House on Coruscant.

Palpatine had many apprentices throughout his reign as Sith lord, but none interested him as much as Anakin Skywalker because Anikan was a product of the force.  The force in a sense was his father and Anakin was brought into existance to balance the force and restore it to the light side after Plagueis and Sidious managed to tilt it to the dark side in the days leading up to the Trade Federation blockade of Naboo.

The events of the novel Darth Plagueis are very entertaining.  I was unable to put the book down after beginning to read it.  I would advise you to check it out now if you have not done so already as it is a great read into the scenes that happened beyond the events of the movies.  It sheds light on many of the deeds that Sidious and Plagueis were involved in leading up to Episode 1: The Phantom Menance. 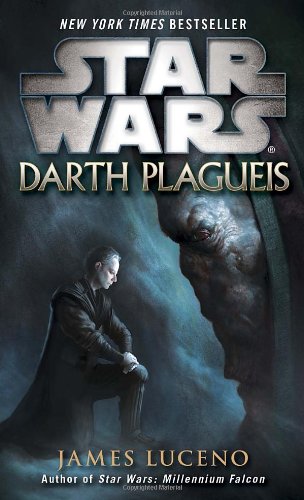