My daughter listens to Rhett and Link religiously while I get ready in the morning. One day, she noticed I was finishing up an article about celebrity endorsements.

"Oh," she exclaimed, "Rhett and Link do commercials too. You should see this one."

And I just about peed myself when my daughter showed me a video of Link pitching a yard stick in a 30-second commercial spoof.

Little did I know that Rhett (Rhett James McLaughlin) and Link (Charles Lincoln "Link" Neal III) are engineers.[1] And, as many of you know, my father was an environmental engineer (with a great sense of humour too). According to Wikipedia, they were roommates at North Carolina State University, where Rhett studied civil engineering and Link studied industrial engineering.

Laughing until my sides hurt, I kept watching their YouTube video (shown next) titled Random Commercial Challenge which was published on January 28th, 2015 by Good Mythical Morning, their morning show.

I just had to share these brilliant comedians with you.

About Rhett and Link

How many of us get to work with our best friend since grade one?[2] Part of their online appeal is their obvious comfort level with each other. It's something that only childhood pals can make look effortless to an audience.

It's endearing that Rhett and Link are lifelong friends, who went to school together, attended each other's wedding, and so on.  And as young as they look, they are each married with children. In fact, their kids make cameo appearances on their show.

In 2009, Rhett and Link wrote, produced, and directed Looking for Ms. Locklear an award-winning documentary about their search for their first grade teacher.[3] It's where they met and became fast friends. Wouldn't we all love to do that?

When these guys were first starting out in the online world of advertising, they had to rely solely on sponsorship to get paid. Yeah, no ad share back then that slackers (like me) rely on.

Since 2006, Rhett and Link have been trailblazers in YouTube video entertainment categories. According to their website biography, this hilarious duo has garnered over 3.6 million subscribers and more than 455 million views.

Up next is a 2:53 minute song you can buy on iTunes called What Women Want (featuring Chester See and Kassem G). It was written and directed by Rhett McLaughlin and Link Neal.

And This Is a Short List of Their Achievements

It seems that every year, Rhett and Link rack up awards in the entertainment, film, media, and advertising industries.

Ever since they mastered low-budget local commercials, big brands have been tripping over themselves to have this dynamic duo endorse them. Brand names include: Alka-Seltzer, Coca-Cola, McDonald's, Netflix, Taco Bell, and TV Guide (to name just a few).

Here are some of the awards and accolades they have earned:

I was floored at the number of projects these two juggle. In between their creative commercial and musical endeavors, they continued with their morning show, a weekly variety show, and a podcast.

Now in their seventh season, Good Mythical Morning (aka GMM)[5] has been going strong for three years. It was preceded by Good Morning Chia Lincoln which had to end since half of the Chia Pet, a central figure in it, started to die.

The Chia Lincoln was replaced in GMM with the Wheel of Mythicality which is shown behind Rhett and Link in my intro photo.

The Wheel of Mythicality consists of various suggestions to end the show. According to my daughter and Wikipedia, Link spins it and then the duo improvise the randomly chosen "mythical' end for the show.

Talk about pressure to perform.

In 2013, the Mega Wheel of Mythicality was introduced which of course was larger than the previous wheel, had fewer spaces, no hidden slots and improved weight distribution.

Ear Biscuits is a 60 to 90 minute long weekly audio podcast on SoundCloud[6] and iTunes.[7] The pair describe it as "a weekly candid conversation with other creators who are making their mark in new media."

In 2015, Ear Biscuits inspired the spin-off called Song Biscuits[8] where the two write a song with the person they interview based on suggestions from social media. On Saturdays, they release the song on their channel RhettandLink2.[9]

Lastly, I leave you with A Brief History Of Rhett & Link published on June 28th, 2013 by FootofaFerret. It gives you a taste of everything this comedic duo has accomplished in the last decade.

A Brief History Of Rhett & Link

Up To This Point

For Every Mythical Beast 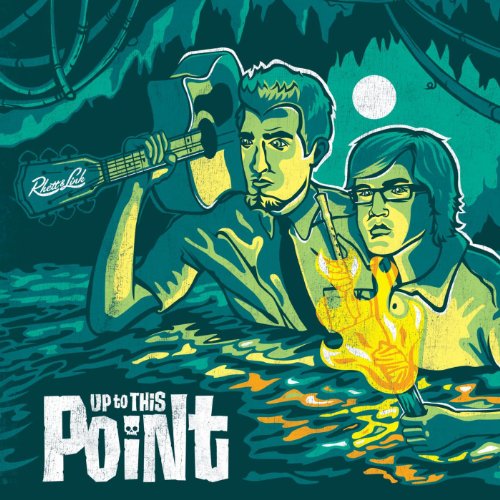 Up To This Point Amazon Price: $8.99 Buy Now(price as of Jul 16, 2016)
Up To This Point is 27 of the funniest comedic songs by Rhett and Link. Upbeat, lively, hilarious tunes the whole family can laugh and sing along with. Includes singles you won't find anywhere else.
Next >> The Rags to Riches Life of Dame Shirley Bassey