Baseball fans, you can also read my other articles, Dale Murphy: An Undervalued Baseball Great, and Wilbur Wood Profile.
InfoBarrel is a writing platform for non-fiction, reference-based, informative content. Opinions expressed by InfoBarrel writers are their own.
InfoBarrel > Sports > Baseball

Robin Yount was born on September 21, 1955 in Danville, Illinois. During his childhood, he starred at William Taft High School. After graduating, he was drafted as a shortstop by the Milwaukee Brewers in 1973. In April of 1974, Yount made his major leauge debut against the Boston Red Sox. In 1975, he broke Mel Ott's record for the most games played before the age of 20. He was an American Leauge All-Star in 1980, 1982, and 1983. In 1982, he was named the Most Valuable Player when he hit 29 home runs and 114 runs batted in. Robin Yount led the Brewers to their only World Series appearence that season. They faced the St. Louis Cardinals and lost in seven games. He had an outstanding series and had a 414 batting average. During the 1985 season, he injured his shoulder, which threatened to end his career prematurely. The Brewers decided to see if Yount could play center field in an effort to extend his career. The experiment worked and he successfully made the transition.

In 1989, he won his second Most Valuable Player Award. That season, he hit 21 home runs and had 103 runs batted in. Yount became just the third player to win the award at two different positions. Hank Greenberg and Stan Musial were the other two. He also had more hits than any other player in the major leauges during the 1980's. On September 21, 1992, he collected his 3,000th hit against Jose Mesa of the Cleveland Indians. This made him just the 17th player in major leauge history to achieve this accomplishment, right behind Ty Cobb and Henry Aaron. Robin Yount retired after the 1993 season. He is the Milwaukee Brewers' all-time leader in games played(2,856), hits(3,142), and runs batted in(1,406). In 1994, the team retired his #19. In 1999, he was elected to the Major Leauge Baseball Hall of Fame.

In my opinion, Robin Yount is the greatest Milwaukee Brewer of all time. He was durable and rarely missed a game. He always had a great work ethic. His loyalty was unquestioned and his entire 20-year career was was played for the Brewers. Not many players these days play for just one team. He could have played somewhere else, but he loved Milwaukee.  Yount participated in numerous charities and was a good citizen. He was a terrific athlete  and was a good baserunner. Whenever the Brewers needed a stolen base, he could provide it. He had good power was an outstanding fielder. Sometimes, I believe that he was so good that he was taken for granted. Robin Yount was in a class all by himself. 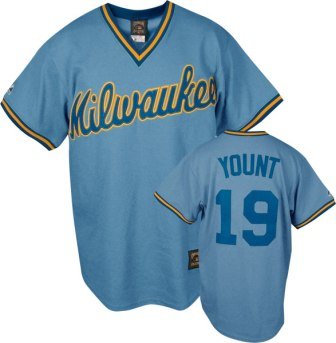 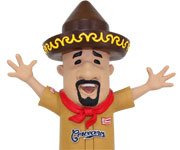 2014 Chorizo Racing Sausage S.g.a Milwaukee Brewers Collectible Bobblehead Amazon Price: $24.99 Buy Now(price as of Oct 26, 2014)
Next >> The 1994 Baseball Strike and the Demise of the Montreal Expos