Rockstar Costume Ideas-Dress Up As A Singer, Guitarist, Or Drummer

Rockstar costume ideas include dressing up as the drummers, guitarists, and singers from the most popular rock bands of the 80`s and 90`s. However, not many people think about creating their own DIY rockstar costume using a variety of clothes and accessories that they may already have in their closet. Whether you want to buy your Halloween costume, create your own homemade one, or a mixture of both...this article will have just the information that you`re looking for!

Don`t be fooled, these rockstar outfits can be worn to more than just a Halloween party.  Imagine for a second that you have dressed up as the guitarist from a famous rock band that was around in the 1980’s; you can wear the costume to an 80’s themed party! The same idea follows with dressing up as a rocker from the 90’s, and even the 21st century.

Wearing A KISS Costume Requires A Lot Of Makeup, But Will Attract A Lot Of Attention

Credit: Amazon.comwere 4 members of KISS, and each of them had stage names. While the band was performing, you could find the following members on stage: Starchild (Stanley), The Demon (Simmons), Spaceman (Frehley), and Catman (Criss).

To be honest with you, each of the members of KISS had a unique look to them, but they all had something in common...jet black hair, lots of white face makeup, and a gothic looking outfit.

There are plenty of Kiss costumes on Amazon being sold for cheap prices...I would definitely check them out!

There are many false assumptions circulating that state that dressing up as one of these KISS characters is simple! They think that putting on the gothic outfit

Credit: Amazon.comand jet black wig is pretty straight forward...simply throw them on and you’re good to go. However, properly applying the white and black facial makeup is what will be difficult!

The idea is to apply some black/silver makeup around the your eyes to represent the KISS rockstar that you are dressing up as.

-The Demon had big black squares with tall eyelash spikes around each of his eyes. *I would definitely dress up in a Gene Simmons The Demon Halloween costume because he’s the most well known out of all of them*

Credit: Amazon.comStarchild had a single black star around his right eye.

-Spaceman had a silver cat-like mask that went around both of his eyes.

-Catman had big black squares around each of his eyes, two small stripes on each of his cheeks, and a small circle on the tip of his nose!

Now comes the fun part: apply white makeup to the rest of your face!

Applying facial makeup to a KISS costume is the hardest part about dressing up as a rockstar for Halloween. Simply choose the KISS character that you want to be, and apply the white, black, and silver makeup as was directed above! 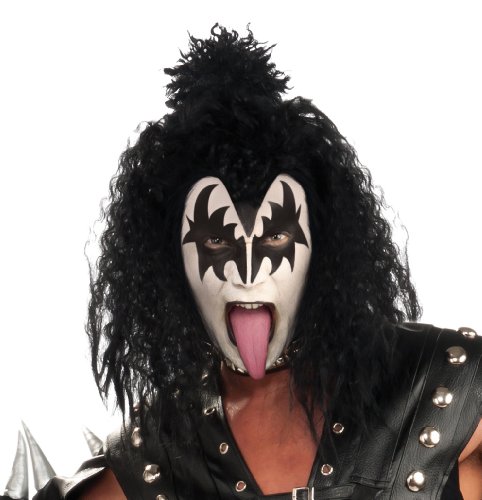 Dress Up As Slash From Guns N Roses

Slash was the famous guitarist from Guns N Roses. He was not only famous for his guitar skills, but also for his great looks.

To be put simply, the best Slash Halloween costumes all include certain things:

-A black and tall tophat. Slash was always seen with his legendary hat that covered the top portion of his hair.

-Very long curly hair (a wig). The Guns N Roses guitarists’ hair was super curly and went down to the middle of his back!

-A leather or jean vest. Slash always wore a vest without a shirt underneath, so almost every rockstar costume that depicts him includes one!

-A guitar! You’re obviously not going to carry around a real guitar, but a great Slash Halloween costume will include a fake one that is light and easy to carry around! 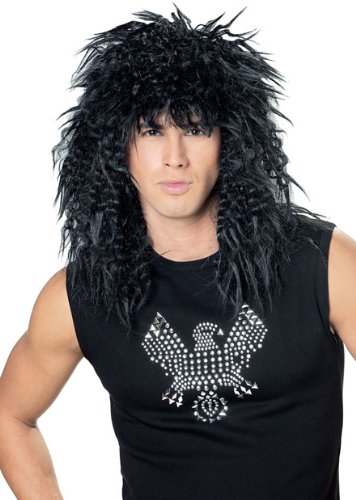 Everyone knows that homemade Halloween costumes are completely customizable, and will save you a ton of money in the long run. Most of the DIY costumes include a variety of clothes and costume accessories that you have gathered together.

When it comes to the rockstar costume ideas that you can wear to an 80’s party, there are a few key items that you must include in your outfit:

-Some gothic jewellery. Most rockstars, whether they were around in the 80’s or the 21st century, wore black and silver jewellery of some sort. With that being said, all of the best rockstar Halloween costumes incorporate the same kind of jewellery.

-The instrument that the rockstar plays. You shouldn’t carry the actual instrument around, as it would be really heavy. However, most costume shops sell a variety of fake instruments that are much lighter.

Whether you want to buy one from a store, or create your own homemade one, there are literally hundreds of rockstar costume ideas that you can execute; these three are my recommendations.