Thank you for your visit. You might also like these stamp articles. Top ten issuers of stamps US Postage Stamps Kids Stamp collecting Disney Postage stamps
InfoBarrel is a writing platform for non-fiction, reference-based, informative content. Opinions expressed by InfoBarrel writers are their own.
InfoBarrel > Travel & Places > Places > United Kingdom

What you will notice immediately about UK postage stamps is that there is no country marked on them. There is, however, a very unique mark that identifies all Royal Mail stamps and that is the icon of the monarch’s head which is shown on every stamp. The image of the reigning King or Queen’s head is used on UK coins, as well as on the British postage stamps.

The reigning monarch, in 2011, is Queen Elizabeth II and her silhouetted head is in the corner of each stamp. Other countries clearly mark the stamp’s origin on the stamp so you will instantly recognize stamps of the USA, Canada, Australia and other English language stamps. More difficult to recognize are stamps bearing a countries name in their own language such as Magyar Post (Hungary), Eire (Ireland) and Nippon (Japan), unless you are multi-lingual, of course.

The Royal Mail delivers thousands of stamped letters and parcels each day and stamp collectors gather up these stamps and keep them in stamp albums. Most of the time these stamps are routed through the delivery system and they are all marked in the sorting office. This marking is called franking and a frank mark is applied to each stamp to prevent its reuse. Some stamp collectors do not like to collect these used stamps and many philatelists gather on unfranked or mint condition stamps. This is a very expensive way to collect stamps as it is necessary to buy new stamps every time.

Browse for the best Advice, Stamp Albums and Stamp Magazines from Stanley Gibbons.

Stamps issued by the Royal Mail have featured famous Olympians, sportsmen and sportswomen as well as leading political figures and dignitaries. The reigning monarch of the day is featured on a variety of stamps as you will see from the selection opposite. When the Monarch is pictured you will notice that there is no longer the need to show the ‘Royal head’ on the stamps. Red is the color of the Royal Mail and all post boxes and delivery vans are this distinctive red color.

Postages stamps can be bought online from the Royal Mail website.

The website also has links for finding UK postcodes and addresses as well as prices, commemorative sections, trackers and the shop. Customized stamps are available which feature your own photographs printed on ‘real’ stamps. A sheet of 10 of your own personal stamps will cost about $10 and, naturally, they will be posted to your home address for you to use.

The Penny Black was the first gummed postage stamp to be issued. The UK’s Royal Mail launched this famous stamp in 1840. Other notable issues from the Royal post offices are stamps featuring the famous Prime Minister, Sir Winston Churchill but the most recognized stamps in the world today are those featuring the late Princess Diana. Several countries have issued ‘Diana’ postage stamps since her death many years ago in Paris. New Royal Mail stamps in 2011 feature Diana’s son Prince William and his new wife Kate Middleton or ‘Lady Kate’ as she is becoming known to the British public.

The Royal Mail issued many stamp packs, sheets and commemorative stamps sets for the Royal Wedding of His Royal Highness Prince William of Wales to Miss Catherine Middleton in 2011. These stamps are definitely worthy of a place in any stamp collection as they are a unique memento of the Royal Wedding, which took place on April 21st 2011.

In time, these stamps and First Day Covers (FDC) will increase in value as the likelihood is that one day, in the future, Prince William will become King William and Great Britain will be ruled by a King and Queen again. Products available online from the Royal Mail are Royal Wedding postmarked stamps, Royal Wedding commemorative envelopes and an illustrated booklet featuring the Royal Wedding couple.

Whatever types of stamp you decide to collect you will find that the major issuers will provide the greatest variety of stamps for your collection. Included among the major issuers are United States Postal Service (USPS), Canada Post, Australia Post, Duetsch Post as well as many others around the world.

The Royal Mail qualifies as one of those big players in philately and to start a collection by beginning with UK postage stamps is a good move. The breadth and variety of stamps that have been issued by Royal Mail is substantial and many past issues of RM are collectible, particularly stamps featuring Princess Diana of Wales.

You will be able to collect postal stamps from Royal Mail on Sport, History,

Transportation, Art or any subject you can think of, even cartoon character stamps. It is not necessarily expensive either, especially if you have friends in the United Kingdom who might be prepared to write to you with post cards and letters. Failing that many Kiloware dealers will sell batches of UK stamps for less than $10. A Kiloware will contain between 800 and 1000 used stamps and you can specify the postage stamp theme or country of issue you require.

The best thing to do when you start a collection of stamps from Royal Mail, or your own country if you do not live in the UK, is to get two stamp albums. The reason is that you will get so many stamps from your home country that you will be able to fill an entire album with them. Generally an album (regular stamp album) will only have a single page, or two at most, dedicated to each country so by having one album for home issues and the second one for ‘foreign’ stamps you will be able to manage your collection much better. It is best to start collecting at home as your own country offers the best chance of getting free stamps. When you decide to gather stamps from another nation, do start with the big issuers due to the greater availability and access to their stamps. You will soon need dedicated stamp albums for more than one country.

Stamp Album of the World 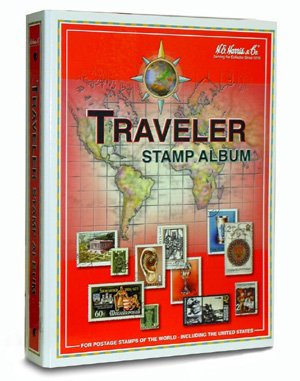