My name is Rose and I am a Canadian freelance writer with a healthcare background in nursing, orthotics/prosthetics, and ophthalmology. I was briefly redeployed during the 2003 SARS outbreak as a frontline worker. Since May 2016, I have been researching the Zika virus and have compiled unpublicized facts on my blog post: Why We Must Demand the CDC and Health Canada Enact Level 3 (Avoid Nonessential Travel).  To help raise money for Zika research, I also designed over 25 educational or humorous items on Zazzle for my Zika: Let's Stop a Global Pandemic Collection.
InfoBarrel is a writing platform for non-fiction, reference-based, informative content. Opinions expressed by InfoBarrel writers are their own.
InfoBarrel > Environment > Green Living

If Every Coffee Drinker and Coffee Shop

Credit: Created October 29th, 2016 by Rose Webster (aka RoseWrites). Kindly ask me about reuse of any or all images.

Since the Zika crisis, I've been researching what scientists use to eliminate disease-carrying mosquitoes.

Based on the work of Dr. Mohammed Abou-Donia and others at Duke University, I have avoided using DEET-containing products as much as possible.

The gist of Abou-Donia et al. findings:
Lab animals exposed to the average human-equivalent dose of DEET (N,N-Diethyl m-toluamide) performed much worse in neuro-behavioral tasks (such as those involved with coordinated muscle movement).[1]
That would involve everything we need to do while awake: walking, talking, and eating.
Plus, combined exposure to DEET and permethrin can lead to motor deficits, learning problems, and memory dysfunction.
A subsequent study in 2003 by Abou-Donai and Abu-Qare listed numerous dangers of concurrent application of DEET and permethrin, including: DNA damage, oxidative stress, and a disruption of the blood-brain barrier in rats.[2]
What's more, the chemical being sprayed in Florida (naled) is a neurotoxin which is "among the class of the most toxic pesticides". Even at legally allowed exposure levels naled is "definitely not safe during early brain development," said senior scientist Jennifer Sass to The Huffington Post.[4]

Coffee May Be the Secret Zika Mosquito Repellent

Save your coffee grounds throughout the day (or week) and then add them to areas that collect water around your home. I use a French press – it's easier than scraping grounds from a filter.
Even cheap coffee beans used in a French press can be good, I've perfected a foolproof coffee method for those on a budget.
Sprinkle coffee grounds over areas that collect water (like on leaves or large bulb flowers). Using coffee grounds[15][16][17] and Bti will drastically reduce mosquito (and other insect) populations.
Plus, coffee grounds make a wonderful fertilizer which smells a thousand times better than manure. Your used java grounds will improve drainage, water retention, and aeration of the soil. They even attract earthworms and help beneficial plant microorganisms thrive.[3]
For over 150 years, Brazil has been the highest global producer of coffee beans.[14] So, using coffee grounds to eliminate mosquitoes seems like a viable solution there. And speaking of Brazil, I wonder how many Zika cases were missed at the Olympics (given the fact the CDC's Zika test fails to detect 40 percent of infections).

Credit: Created by RoseWrites on October 29th, 2016. Kindly ask me about reuse of all or part of this image. Thank you.
Be sure to dump any standing water, though. Images by RoseWrites [ask about reuse].

Credit: By KÃ¼chenkraut (Own work) [Public domain], via Wikimedia Commons
Bti (Bacillus thuringiensis serotype israelensis) is an organic larvicide.
It is actually a group of bacteria that helps eradicate mosquitoes, fungus gnats, and blackflies but has nearly zero impact on other organisms.
In the photo shown at right, brown granules in the water are a Bacillus thuringiensis israelensis preparation that will kill mosquito larvae that hatch in an ovitrap.
Photo credit: Küchenkraut (Own work) [Public domain], via Wikimedia Commons
Kacey C. Ernst PhD, MPH, University of Arizona, recommends using Bti pellets for "standing water that can't be removed, such as small water features or even bromeliad flowers that hold enough water for mosquitoes to breed in. It's safe for humans and pets."[5]
The U.S. Environmental Protection Agency (EPA) put together a FAQ webpage called Bti for Mosquito Control.[6] Key points:
Since the EPA stated: "Bti has minimal toxicity to honey bees", I looked up what researchers from Cornell university found. Their fact sheet states:
"Normal exposure rates do not cause harm to honey bees. Very high concentrations (108 spores/ ml sucrose syrup) of B.t. var. tenebrionis, which is used against beetles such as the Colorado potato beetle, reduced longevity of honey bee adults but did not cause disease."[10]

Available in 30-Ounce, 60-Ounce, and With Dunks 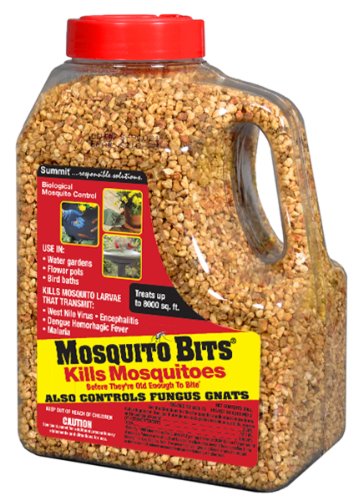 Mosquito Bits, 30-Ounce Amazon Price: $18.99 $11.13 Buy Now(price as of Nov 15, 2016)
Mosquito Bits kill mosquito larvae within 24 hours. Best to reapply every 7 to 14 days for maximum benefit. Safe to use in water that contains aquatic life, fish, and plants. Mosquito Bits may be applied to areas used by (or in contact with): humans, animals, horses, livestock, pets, birds, or wildlife.

Rubbing Alcohol or Vinegar in a Spray Bottle

When I was in my 20s *cough cough* not that long ago, I could successfully swat any fly or mosquito. Now? Not.

Fortunately, I noticed rubbing alcohol in a spray bottle at the pharmacy. I thought this was brilliant, bought it, and decided to keep it in the bathroom.

One day, a lone fast-flying bug accompanied me into the bathroom. I couldn't catch it but I sprayed it with rubbing alcohol and it slowed right down to my speed. Got 'em.

Another benefit of rubbing alcohol (and I use the standard 70 percent kind) is it kills mealybugs on indoor succulent plants[11] (aka succulents or fat plants).

But for those of you who want something less expensive and definitely not corrosive to spray on bugs, try this 3-ingredient vinegar spray:

Get a Cat or Two, They Spot Bugs Fast

Cats are wonderful at spotting annoying insects. But keep in mind they can have severe skin reactions to bites. A cat's ears and nose are especially vulnerable. And mosquitoes can transmit heartworms and West Nile Virus to cats.[12]

Once Editor Cat finds a bug, I quickly take over. And once I spray the bug with rubbing alcohol, she instinctively backs away.

As for the Zika virus (which has been poorly handled by our public health authorities), I felt the University of Illinois College of Veterinary Medicine in Urbana[13] offered the most up-to-date information:

"Disease caused by Zika has not been demonstrated in animals, and, in the short term, it is unlikely to become a problem in our animal population in the United States." ~ Dr. Maureen Long, Department of Infectious Diseases and Pathology at the University of Florida College of Veterinary Medicine and an expert in Flaviviruses

It is unknown, as of September 2016, whether animals will become reservoir hosts of Zika.

"To our knowledge, the only species that develop a very high viral load of Zika in their blood are humans and non-human primates." ~ Dr. Maureen Long

Ergo, if your cat is bitten by a Zika-carrying mosquito, it is unlikely that he or she will provide a hospitable environment in which the virus could thrive.

Related: Zika Shrivels Testes, Drops Testosterone, and May Cause Infertility

Zika Can Survive For Hours on Hard Surfaces

"Zika can survive on hard, nonporous surfaces for as long as eight hours, possibly longer when the environment contains blood, which is more likely to occur in the real world. The good news is that we found that disinfectants such as isopropyl alcohol and quaternary ammonium/alcohol are generally effective in killing the virus in this type of environment and can do so in a little as 15 seconds."

Yet another reason to keep isopropyl alcohol handy. Because if you swat a female mosquito (that has just had a blood meal) blood will be left behind – where it was squashed. This is definitely not something you want a toddler or anyone to come in contact with.