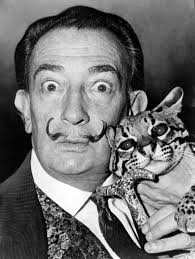 Salvador Dali, or as known by birth, Salvador Felipe Jacinto Dali i Domenech, , was by far the most infamous surrealists. Surrealism embodied all that existed within the subconscious and the hypnotic chaos that evolved from dreams. Surrealism stemmed from the earlier art movement, Dada, which had its inspiration from World War I. While Dada took its inspiration from the violence of the world, Surrealism took its cue from dreams and the subconscious.  Often any given work within this movement reflected what was then considered modern day society and somehow commented on the current political, societal, and social trends. The paintings in this movement are often labeled as abstract, however many true Surrealists would argue that they are indeed realistic, almost a more authentic version of reality. Although, not one of his most famous pieces, Salvador Dali’s Apparition of Face and Fruit Dish on a Beach, 1938, is a true representation of this radical style of art. 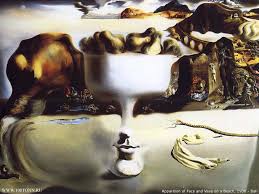 This oil on canvas is extremely intricate and requires more than a quick glance, which at first appears to be a isolated beach. It gives off an overall cold and standoffish feeling through its use of muted colors. A sadness is envisioned from this truly desolate contrived version of reality. The main focus is of a face that through the use of illusion doubles also as a fruit dish. With more careful focus, the resemblance of a dog comes through and the dog’s eyes double as a cave as well as the fruit dish turns into the body of the dog. The ability to create such eccentric and incredulous imagery induces many questions regarding Salvador Dali and how he came about to create such abstract and delusional pieces.

Salvador Dali was born on May 11, 1904 in Spain. He studied the application of art at the San Fernando Academy of Fine Arts where the foundation began. Salvador Dali later moved to Paris, where he was properly introduced to the Surrealist movement. It was in Paris, that he met the greatest inspiration of his life, his wife, Gala Eluard. Salvador Dali later fled to America, escaping the perils of the Second World War Through out his life, his biggest inspiration for delving into the Surrealist movement was Sigmund Freud. Dali reveled in the discovery of the subconscious and exploring this through his bright esoteric imagery in his artwork. Dali spent the majority of his time as a Surrealist artist, until he discovered Raphael as a new mentor, and was then cast out from the Surrealism movement due to his newfound conventionality. He then preceded to discover new avenues of artistic expression through set design and jewelry making. Dali passed away from heart failure in 1989, back in his beloved home country of Spain, having lived an extensive and full life. There are an extensive amount of websites paying tribute, as well as several museums around the worlds solely devoted to his life work. Salvador Dali is without a doubt highly revered in modern day society as one of the most influential artists of our time.