Saving Money On Your Utility Bill Every Month

The average household budget will have the monthly utility bill as one of its largest single items. If this can be reduced in some way, it would be a very welcome benefit for most families.

As a matter of fact, there are plenty of different ways to achieve this. Somewhat ironically, some of the best ones involve making use of technology to cut your energy usage. The large majority of energy saving techniques available are easy to apply, require no major capital outlay and are very effective. Many of them will help to reduce your bill almost immediately.

Credit: www.amazon.comAlthough it sounds very obvious, turning things off when not in use is a common sense way to save money. The trouble is that common sense can be a rare commodity at times - and some of our gadgets are almost never switched off. Instead of being properly turned off, a lot of modern gadgets enter “standby mode” instead. As well as devices on standby, charging devices - such as those used for notebook computers, cell phones, and various other portable electronic devices - continue to draw power when they are left plugged in - even when they are not actually charging anything.

As much as 10% of a typical family home's electricity can be used up in supplying devices which are not actually being used but are sitting "on standby". Turning these devices fully off when they aren't being used makes sense and saves money. Given the large number of gadgets and gizmos in the average family home these days, it might be difficult to keep track of what's on standby, what's in use and what is switched off. If you struggle, get yourself some special power adapters which can detect when a device has entered standby mode and then kill the supply to it.

The potential to reduce your power usage and save money is really quite good. It might also extend the life of some of your electrical devices at the same time.

Another way to use modern technology to your advantage when trying to get your utility bill down is to fit low energy light bulbs throughout your house. The conventional incandescent filament bulbs that most of us have been using for years, are a good example of a device which generates more heat than light. A mere 10% of the energy supplied goes towards producing light. The other 90% is wasted in the form of heat.

Modern energy efficient light bulbs use less than 25% of the energy of conventional light bulbs for the same level of illumination. They also have a much longer life - so as well as saving you money, you won’t need to get your step ladder out to change light bulbs anything like as often.

As a final example of how modern technology can help you to reduce your energy bills, consider the latest low temperature cleaning agents and detergents now available on the market. You will be able to operate your dishwasher and washing machine on a lower temperature setting than you usually do.

Washing machines and dishwashers tend to be two of the highest energy consumers in the average family home. Operating them at a lower temperature - say 30 degrees - could reduce the energy used by up to 40%, and that could have a very positive impact on your energy bill each month.

Save Money On Your Energy Bill - Now! 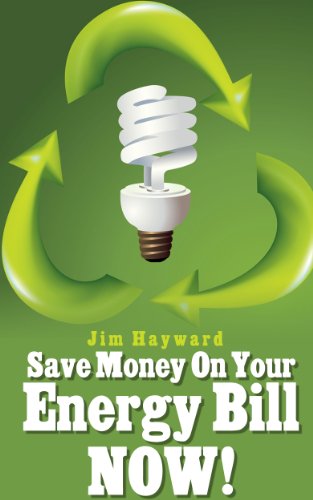 Save Money On Your Energy Bill - Now!Amazon Price: Buy Now(price as of Nov 18, 2013)
This short guide will give you ideas for no-cost to low-cost energy saving tips that you can implement right now. You'll see the difference on your next bill.
Next >> How to Get Rid of Fruit Flies - Arm Yourself and Win The War!