InfoBarrel is a writing platform for non-fiction, reference-based, informative content. Opinions expressed by InfoBarrel writers are their own.
InfoBarrel > Technology > Science > Physics

It's an odd contradiction that "smart" phones seem to be making kids dumb.  Nonetheless, teachers and test scores both agree that the distractions of tech gadgets and the bizarre social interactions they've spawned are producing a generation of unmotivated and poorly educated kids.

There are ways to combat this, but creativity and diligence are needed.  One strategy to bring kids back into the real world is to expose them to simple science experiments and demonstrations in 3 dimensions.  A cool science gadget can compete effectively with  cyberspace if it's a little mysterious and surprising.  And while mystery and surprise aren't usually associated with either science or gadgets, radiometers are one good example of a scientific instrument that has both.

Radiometers alone won't solve the problems of parents and educators.  But they could be one of the sparks that kindles a flame of interest in the world that exists outside of bits and bytes.

As you can see in the photo above, radiometers are simple. The vanes are made of thin metal, with white sides and black sides facing the same direction.   The vane assembly is enclosed in a glass bulb under a partial vacuum.

When visible light or infrared radiation strike the bulb, the vanes turn toward their white sides.  The speed of rotation increases with the intensity of the light or heat.  Radiometers are fairly sensitive, and will respond to the heat from your hand.

Cooling the bulb will cause the vanes to spin in the opposite direction, toward the black sides of the vanes.

The Surprise and Mystery of Light Mills

Like so many great discoveries, the radiometer was invented by accident.  Sir William Crookes, a chemist and physicist with many interests, noticed that when light shined on a scale in a vacuum, his sample weight changed.  He assumed that the light was exerting pressure on the scale, and made the first radiometer in 1873 to test that notion.  He called his invention a light mill.

Crookes believed that the force that caused his light mill to spin and his samples to weigh differently was "light pressure".  This is the explanation still offered today by some makers of Crooke's device.

Crooke's explanation was proven incorrect, though, in 1901 when the development of better vacuum pump technology allowed researchers to make his radiometer with a much lower vacuum pressure.  These devices didn't spin at all when exposed to light or heat, and neither did radiometers that were made with full atmospheric pressure.

I'm not going to spoil it for you by telling you the answer that physicists have come up with.  You may be pleased to know that it was controversial for several years, and that even Albert Einstein studied the phenomenon.  The device is simple, but the principals that make it work aren't.

Observing how a radiometer responds to heat, cold, and light is intriguing.  Young minds are naturally curious, even though our tech toys can unnaturally deaden that curiosity.  For under $15, you can find out whether a radiometer just what your young tech addict needs to put down his or her smart phone and actually think about how the world works.  You can find one here. 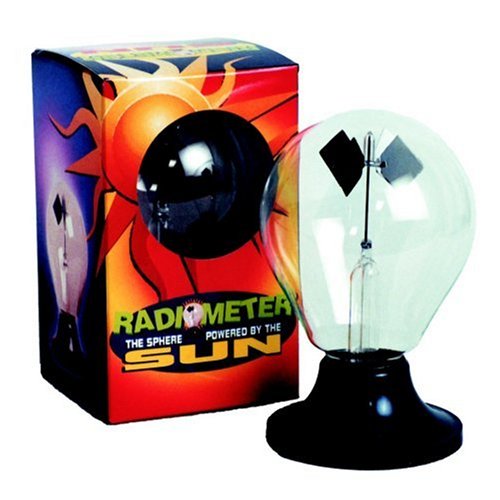