In the '90s, I was fortunate to snag tickets to CBC's taping of Comics![1] in downtown Toronto. The only thing I knew about Scott Faulconbridge at the time was that he doesn't use profanity in his act.

I immediately noticed how comfortable he appeared on stage and how expressive he was with his arms and hands. He reminded me of Steven Wright - the way he paced and kept a straight face when he spoke.

One of my favourite quips was his story about camping and bears which I found on YouTube (only 2:18 sec) shown next.

Not only does Scott have an impeccable comedic delivery, his voice is memorable. It's immediately recognizable whenever I hear him doing voice over work. Mr. Faulconbridge has also appeared in film, radio and TV.

On stage, he strikes me as an intelligent, thoughtful, regular Canadian guy. Once I found out that he's from Montreal, I knew he'd be killing them on stage at the Just for Laughs[2] comedy festival.

Next, enjoy a clip of Scott Faulconbridge in 2005 (nicer shirt and same great taste in shoes). Notice how he doesn't need to exaggerate to make a story funny.

Scott talks about marriage, pregnancy and labour. At the 3:20 point he talks about life with a new baby boy - priceless.

Scott Faulconbridge at Just for Laughs 2005

Scott Faulconbridge attended Marianopolis college, Quebec’s only English-language private college and McGill university in Montreal where he majored in immunology. His comedic career began in Montreal as a member of On the Spot, one of Canada’s most popular and acclaimed improv troupes.[3]

Next came stand-up comedy. He's been seen on CBC, CTV, and NBC television networks, performed at Just for Laughs five times, and is wildly popular with North American and UK audiences.

Up next is one of the most memorable skits that friends of mine try to imitate.

Those Shoes have Sprouted Great Suits

In 2009, Scott was nominated for Best Male Stand-Up

Faulconbridge was always known for wearing the most stylish shoes and now it appears he's expanded his look to include some dapper-looking shirts and suits.

An Accomplished Writer and Actor

Faulconbridge has written for CBC's Just for Laughs, Discovery Kids’ Jacques Cousteau, and YTV’s Fries with That. He also did the rewrite of the screenplay for the feature film Iza Bella in 2007.[3]

You might recognize Scott in film and TV roles. He was Billy the Caddy in Disney's The Greatest Game Ever Played, in Stephen King’s Dead Zone, and in the premiere season of CBC's The Debaters on TV. In fact, he has 13 acting credits to his name.[6]

Aptly titled Nice Shoes, Scott Faulconbridge has put together a fabulously funny DVD. It's available for purchase on his website. I found a 1:05 min sneak preview of it on YouTube (shown next).

Stories You Shouldn't Tell Your Children:

According to the Yuk Yuk's[7] calendar, Scott Faulconbridge will be performing at the following cities in Canada:

I Wrote to Scott Faulconbridge

When I was researching facts for this article, I checked out Wikipedia and oddly enough it stated:

He is especially renowned as one of the only comic[s] in North America that eats seeds on [in] green apples "Granny Smith".[8]

Scratching my head, I decided to email Mr. Faulconbridge to find out more information. And he granted me a one-on-one interview.

RW: Where are you from? Siblings?

SF: Montreal. I'm the oldest of two - I have a sister. She's taller than I am, which is humiliating so please don't mention it. (He called to tell me to keep it in).

RW: Who influenced you to become a comedian?

SF: Bill Cosby, Bob Newhart, Woody Allen and this girl I was trying to sleep with who wanted me to do an open mike.

RW: What do you enjoy most?

SF: Anything creative, the process, it's great when you're in "the zone" be it acting, radio, improv, or whatever.

RW: What are you most proud of?

SF: I don't think I've done that or could say what that would be right now. I haven't gotten there yet.

RW: And a degree from McGill in immunology - wow. Did you want to pursue it further? I'd imagine you graduated top of your class.

SF: The first year I got all A's. and then I realized how much I disliked it. Then I did not get all A's.

RW: Did you know your Wikipedia entry says you're known as one of the only comics in North America that eats Granny Smith apple seeds?

SF: Yeah, ha, I just noticed that a few days ago - that [Wikipedia entry] is in French. I have no idea how or who came up with that. And no, I don't eat apple seeds.

RW: I'm pretty sure you can put your own information on there [Wikipedia].

SF: Yeah but, who writes their own [biography]?

SF: Married 11 years, my wife did some acting work, she's resuming her studies this fall so she can work with autistic children. I have a son, 10 and a daughter 6 [years of age]. Have two cats.

RW: Travel with the family?

SF: Well, I've really scaled back, since it's hard to do when the kids are young. But to keep things fresh, I have to get out there.

RW: Would you consider hosting a late night talk show - when Craig Ferguson steps down?

SF: Yeah, but hosting a show like that is huge. To be out there night-after-night. Don't know if after 3 months I'd be wanting to do it - but I'd love to work on a show like that.

RW: You know some people doing it?

SF: Yes, I've met Jimmy Fallon - twice actually. I've been in contact with people [in the business]. Steve Patterson is probably the all-around guy that could withstand that type of thing, right now.

RW: New projects? I heard your song "Pregnancy Sucks" and you have a great radio and singing voice.

SF: My latest CD is soon to be released - Scottland. It'll be available on my website, iTunes, and CD Baby. CD Baby will be selling it on Amazon, I believe. And I play guitar and do a little singing - but it's funny, I was always told I didn't have a good singing voice.

RW: I've heard that Canadian audiences are great, US okay, and the UK ones are tough - any truth to that?

SF: Well, people from the UK are more apt to "let you know" if your act isn't going well [Scott was referring to another comedian]. They chanted this guy off the stage - who was, in all fairness, giving them some attitude. And the MC normally spends some time with the audience bringing them "back to the show." But no, after that it was like, "And now for our next comedian, Scott Faulconbridge."

SF: It was fine. By the end of my set they no longer hated comedy.

RW: Do you get nervous? And how do you deal with it?

SF: Sure, I still get nervous. But the to thing is channel that energy into the act on stage.

RW: Advice for up-and-coming acts? What's the business like?

SF: Within two years, I had people booking me - it was almost too fast [a rise]. I've been doing this 23 years now. It's not for everyone, there's a great deal of your soul being put out there on stage. Tina Fey said she tried stand-up a few times and it just wasn't for her.I see great improv actors that won't do stand-up . . and they are all extremely talented. but there is a kind of brutality to doing stand-up.

RW: Vulnerable out there?

RW: Plan to star in your own web series like Jerry Seinfeld's Comedians in Cars Getting Coffee?

SF: I actually like the format of that show, yeah. Like I said, the creative side is what I enjoy about all of this [radio, stand-up, improv, acting].

Author's note: Scott Faulconbridge struck me as the least egotistical person I've dealt with in a long time. He's extremely humble and I'd say 'still flying under the radar.' I can't wait to see him perform in Toronto. I'll be checking out 'Nice Shoes' and his soon to be released CD 'Scottland' as soon as possible.

Digitial pre-sales for "Scottland" are available on iTunes beginning August 1st and personal copies of Scott Faulconbridge's CD can be ordered from his website scottfaulconbridge(dot)com.

The stand-up comedy of Scott Faulconbridge 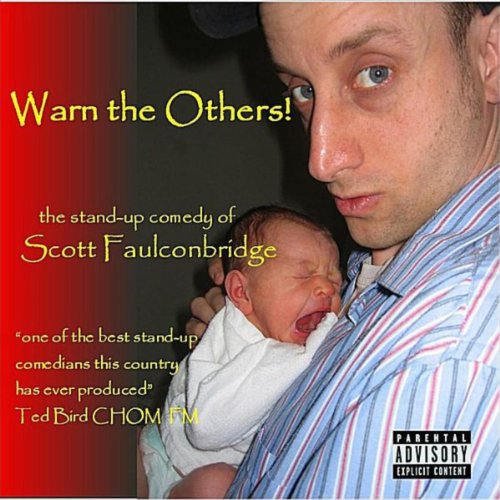 Warn the Others [Explicit] Amazon Price: $8.99 Buy Now(price as of Sep 1, 2014)
The MP3 includes 15 hilarious stand-up bits that Scott Faulconbridge has performed. You can purchase all of them or just a few (each skit is $0.99). Some of my favourite routines are: porpoises, kitty cat, safety pin, skiing, and warn the others. 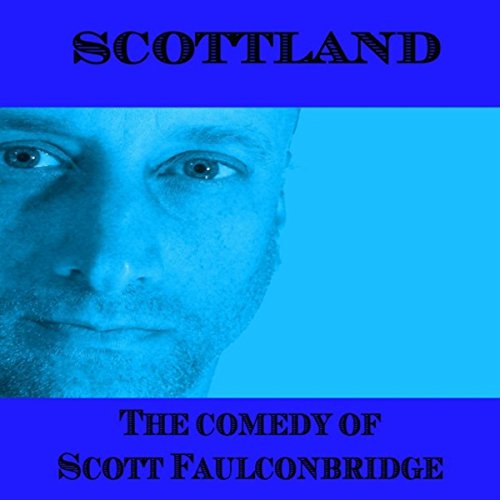 Scottland [Explicit] Amazon Price: $8.99 Buy Now(price as of Sep 1, 2014)
Get the entire MP3 for less than $10. Contains over 53 minutes of the hilarious Scott Faulconbridge as he talks about: marriage, parenting, kids and grandparents, cats, IKEA, Canadian Tire, Newfoundland (which understandably requires a separate category), and more. Individual tracks also available.
Next >> The Rags to Riches Life of Dame Shirley Bassey