I am a retired teacher of English as a second language. I teach on line via Skype, and write on-line articles which reflect my love of travel, language, literature, history and culture. I love writing for InfoBarrel. Why not join me by signing up here: http://www.infobarrel.com/signup.php
InfoBarrel is a writing platform for non-fiction, reference-based, informative content. Opinions expressed by InfoBarrel writers are their own.
InfoBarrel > Lifestyle > Holidays & Celebrations

January 25 is Robert Burns Day. This is a day when Scots and Scottish wannabees in Scotland and around the world joyfully celebrate Scotland's most famous poet.

Born in 1759, Robert Burns, who was also known as Rabbie Burns, the Ploughman Poet, and the Bard of Ayr, was the son of a poor Scottish tenant farmer. Burns began working on the family farm when he was 15, and took over when his father died bankrupt in 1784. Although only 37 when he died in 1796, Burns lived a passionately creative life. He fathered 14 children by a bevy of bonny lassies, and left a poetic legacy which includes over 300 songs as well as a large body of poetry on topics as diverse as love and politics, most of which were written in Scottish dialect1.

A Burns Day lunch or dinner is a fun event at which people wearing their clan tartans or adopted tartans come together for a lighthearted celebration of Scottish culture. They pay tribute to the fertile legacy of Scotland's famous bard while enjoying a few drams (glasses) of Scotch and that most famous of Scottish dishes, the haggis.

The Order of Events

After the guests gather there will be some opening remarks followed by the Parade of the Haggis and the Address to the Haggis.

Before describing this highly formal ceremony which begins every Burns dinner, let me put things in perspective. Haggis is a humble, sausage-like peasant dish made from sheep heart, lungs and liver, which is boiled, ground up with oatmeal and stuffed into a sheep's stomach.

For the parade, a hot haggis is laid lovingly on a silver platter. It is then carried from the kitchen by the chef, accompanied by a bagpiper playing a suitable Highland air. After the haggis has been piped in it is placed respectfully on a table at the front of the room. Then with great formality a reader intones Burns' poem Address to a Haggis in praise of this "honest" and humble oatmeal and offal pudding.

As he reads the poem, the orator wields a large carving knife, or in some cases a ceremonial sword, and plunges it into the heart of the haggis to reveal the "gushing entrails" of the ceremonial victim. The poem expresses scorn for gourmet dishes like "French ragout" and "fricassee", asks who would look down on "sic [such] a dinner," and praises the strength of the "rustic, haggis-fed" Scotsman.2

A Word of Warning

The BBC Burns Night webpage advises the chef to put a small cut in the haggis skin before it is piped in. Otherwise, when it is stabbed it could explode and ruin the clothes of nearby dinner guests. The webpage does, however, grudgingly admit that could also be considered part of the fun.

Once the haggis has been suitably eulogized, guests enjoy a dinner featuring haggis and other traditional Scottish food such as cock-a-leekie (chicken and leek) soup, and smashed tatties and neeps (mashed potatoes and turnip). The dinner may be complemented by wine or beer, and followed by cheese and oatcakes accompanied by a fine Scotch.

Before eating, the diners join in a suitably pious pre-meal prayer, called The Selkirk Grace, which goes as follows:

After dinner, it is time for guests to be entertained by speeches and toasts.

The first speech is referred to as The Immortal Memory. This focuses on some aspect of the artistic and/or love life of the Bard of Ayr, and concludes with guests raising their glasses in a toast. There is another opportunity to raise glasses for the Toast to the Lassies, introduced by a tastefully mocking speech from a gentleman guest about the vices and virtues of the ladies. The ladies then get an opportunity to get their own back and propose another toast with the Reply From the Lassies.

The program for the event may4 also include other speeches and toasts. Guests can be encouraged to entertain each other with readings of Burns poems and the singing of Burns romantic songs, perhaps in a recitation competition. Jokes and anecdotes that suit the spirit of the event or a quiz on a Burns or Scottish theme might also be featured, along with entertainment by musicians, a choir or Scottish dancers. Sometimes there is a reading of a "long lost manuscript"3 containing verses especially written for the evening by a budding poet on a topic about which he or she thinks Burns might have held strong opinions.

Several well-loved Burns poems might be read during the course of the event.

One popular work is the long narrative poem Tam O'Shanter. This is a cautionary tale about a man who was frightened by visions of witches and warlocks after he spent too long drinking at the local pub5. It is a lesson on the fleeting nature of life and pleasure which reminds us that:

... pleasures are like poppies spread,You seize the flower, it's bloom is shed;Or, like the snow-fall in the river,A moment white, then melts forever.

Burns wrote many poems about his love for his Highland home and the natural world, and often used humble subjects to address universal themes.

To a Mouse is a well-known poem which describes the regret that a farmer feels when he destroys the home of a tiny mouse with his plough. This charming poem contains the famous lines "The best laid schemes o' mice an' men/Gang aft a-gley" [the best laid schemes of mice and men often go wrong] which provided John Steinbeck with the title of his famous depression-era work Of Mice and Men. 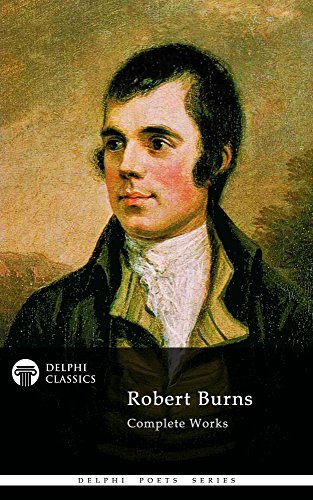 To A Louse7 is another well-known poem which contains a particularly famous pair of lines written by Burns:

In a more serious vein, A Man's a Man for a' That8 is a poem on a political theme which arose from Burns first hand experiences of the social  injustices of his day. Because he was afraid of political reprisal, Burns published this poem anonymously in 1795.  This is a poem which criticizes the injustices of a class system in which high rank could be conferred on fools at the whim of the king while a proud and honest man was despised simply because he was poor.  It celebrates the dignity of the working poor and the brotherhood of man by arguing that a man's worth should be measured not by his wealth but by his character, a sentiment that seemed to anticipate by 170 years the hope expressed by Martin Luther King's in his "I have a dream" speech that his children "not be judged by the color of their skin, but by the content of their character."

Two of Burns' best known lyrics to traditional tunes are Auld Lang Syne and the unashamedly romantic Red, Red Rose. in which a lover pledges to love his "bonnie lass" until the seas run dry and the rocks melt in the sun9.

But all good parties must come to an end.

So after they have enjoyed good comfort food, generous libations and some fine entertainment, the guests end the evening's celebration by singing Burns great tribute to present and absent friends, Auld Lang Syne. The traditional way to do this is to stand in a circle. Everyone then crosses their arms in front before joining hands with their neighbor.

The lads escort their bonnie lassies back home. Hopefully their best laid schemes will not "gang agley" and they will go straight home, not get waylaid and see nightmare visions like Tam O'Shanter.  And, hopefully they will wake up the following morning not with a hangover, but with  nothing in their head but good memories of the previous evening's celebration.