I am a retired teacher of English as a second language. I teach on line via Skype, and write on-line articles which reflect my love of travel, language, literature, history and culture. I love writing for InfoBarrel. Why not join me by signing up here: http://www.infobarrel.com/signup.php
InfoBarrel is a writing platform for non-fiction, reference-based, informative content. Opinions expressed by InfoBarrel writers are their own.
InfoBarrel > Health > Nutrition & Weight Loss

Seven Reasons Why the Japanese May Have the World's Healthiest Diet

The typical North American diet is calorie rich and nutrient poor. It is also loaded with fat, salt, sugar and suspicious food additives. It is no wonder that North Americans are advised to follow the eating habits of other cultures in order to improve their health.

Credit: ebru via Wikimedia CommonsSome people recommend the red wine and olive oil of the Mediterannean diet or the spartan, practicaly vegan Mount Athos diet of Greek Orthodox monks. Others tout the benefits of the Paleolithic diet which does not contain agricultural products such as grain or dairy. Vegetarian or vegan diets from the Indian subcontinent or a vegetable rich Chinese diet are also said to be beneficial.  But the healthiest diet in the world may well be the traditional Japanese diet.

This diet is thought to be one of the reasons that people in Japan are blessed with enviable health. Life expectancy in Japan is the highest in the world. According to the World Health Organization, Japanese life expectancy in 2009 was 86.4 for women and 79.6 for men. In comparison, average life expectancy in the U.S. is 76 for men and 81 for women. Japan is also the world’s slimmest developed nation with an average Body Mass Index of 3.2 percent compared with 30.6 percent in the US. While genetics and the Japanese universal health care system are both important factors, these impressive statistics also reflect the benefits of a unique combination of beneficial foods found in the traditional Japanese diet.

The traditional Japanese staple is plain, steamed rice which is eaten at every meal. An indication of the importance of rice to Japanese cuisine can be seen in the Japanese words for breakfast, lunch and dinner. asagohan, hirugohan and bangohan, which translate into English as "morning rice," "day rice" and "evening rice."

Plain steamed rice without added oil or sauce not only fills without fattening but also contains essential amino acids, thiamine (B1) and manganese, which is known to support the immune system.

Soybeans are an excellent source of high quality, cholesterol-free protein, polyunsaturated fats and essential minerals including calcium, iron and zinc.

Soy rich foods are known to have several benefits. They can help to prevent breast cancer, control blood pressure, improve heart health and regulate cholesterol levels. The Japanese eat soy in various forms. They regularly consume miso soup, which is made from fermented soy beans. Tofu or bean curd is used as an ingredient in miso soup and many other dishes such as this beautifully presented "silken tofu" .

Edamame or boiled green soy beans are a popular snack. Here is a short video which shows how to prepare and eat this tasty and nutritious treat.

One soy product which is believed to have particular health benefits and which is unique to Japan is natto, a fermented bean product which is high in protein and vitamins E and B2. Natto is also high in vitamin K which helps to regulate bone health and calcium levels in the body, and may even reduce the risk of cancer. Some studies indicate that nattokinase, a substance found only in natto, may also ward off Alzheimer's disease and contribute to the prevention of heart attacks, blood clots and strokes.

The Japanese eat almost three times as much fish as Americans. Between 2005 and 2008 they ate 135.5 pounds per capita compared with consumption of 53.3 pounds per capita in the United States. They eat fish every day and are particularly fond of fatty fish such as salmon and herring, which they often enjoy raw as sashimi. Fatty fish is an excellent source of Omega-3 fatty acids which have been found to protect against atherosclerosis, heart attacks and strokes by preventing the build up of  plaque in the arteries.

While the rates of high cholesterol, high blood pressure and type two diabetes among Japanese men are similar to those in the U.S. and even though Japanese men are often heavy smokers, their rate of atherosclerosis is less than half that of their U.S. counterparts. WebMD refers to this as "the Japanese paradox" and suggests it may be due to the high levels of Omega-3 fatty acids present in the blood of Japanese men thanks to their seafood rich diet. In support of this opinion they cite a study which found the blood Omega-3 levels of Japanese men in their forties to be 45 percent higher than that of Japanese men living in the U.S. and 80% higher than that of Caucasian U.S. males.

The vitamins, minerals and fiber provided by vegetables are an essential part of a healthy diet. While many North Americans find it difficult to eat the four to tens daily servings of vegetables recommended by nutritionists, the Japanese eat a variety of vegetables with every meal.  These are all fresh rather than canned or frozen and the cooking methods they use are generally steaming, stir frying or simmering in broth, all of which help to preserve valuable nutrients.

The Japanese eat a wide variety of vegetables some of which such as bitter melon or shitake mushrooms, are believed to have particular health benefits.

This Cookbook is a Great Place to Start. 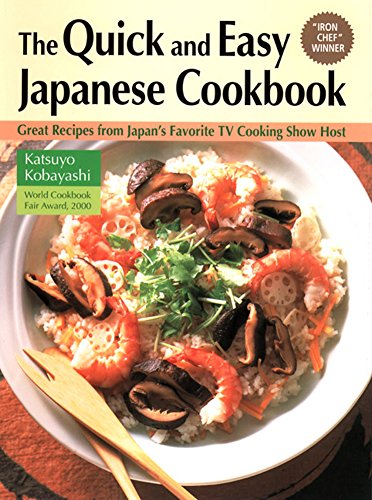 Seaweed is an excellent source of vitamins A, C, B6 and B12 as well as a variety of minerals including iron, zinc, calcium and selenium. It is a particularly rich source of iodine and Omega-3 fatty acids. Several types of seaweed are used in Japanese cuisine. Nori is used for sushi wrappers, wakame is used in miso soup, and konbu is used to make dashi, the basic Japanese soup stock.

Green tea is an integral part of Japanese culture. It is not only offered as a special drink for honored guests at formal tea ceremonies but is also enjoyed every day with ordinary meals or snacks.

In contrast to black tea, green tea is made from unfermented leaves. As a result it contains much higher levels of polyphenols, powerful anti-oxidants which are believed to slow the aging process and prevent cancer and heart disease. Green tea has been the focus of a great deal of scientific inquiry, and various studies suggest that it can lower harmful cholesterol and reduce the risk of cardiovascular disease, tooth decay, inflammatory bowel disease, obesity, diabetes, Alzheimer's disease, rheumatoid arthritis and some forms of cancer.

Several foods known to create health problems in Europe and North America are absent from the traditional Japanese diet.

The Japanese use very little refined sugar and tend to avoid rich, fattening dessert. Because historically their staple foods were rice and noodles, they used to eat very little bread. Also, since most of their protein comes from fish or soy they eat very little red meat or dairy products, so their intake of saturated fat from animal products is little to none.

Unfortunately, many Japanese are abandoning their traditional diet in favor of less healthy and more fattening foreign alternatives. They are consuming more refined sugar, bread and baked goods, meat and dairy products. Regrettably, their health is likely to suffer as a result.