Whether you need to cut your article down to a particular wordcount, or just want to make the language as tight as possible, a good way to start is by looking for the following words: both, more than, that, the, to, and which. Often they can be removed without causing confusion or grammatical problems.

Look at these sentences:

Both my wife and I exercise on Sunday.

The chef tasted both the appetizer and the main course before sending them to the customers.

There's no need to use both in either sentence, because the two people/items have been clearly identified. Restrict the use of both to situations where it's needed to make it clear you're talking about two (not more) things. For instance:

Both of my brothers work in the oil industry.

More than, of course, can be replaced with over in cases like this:

In some situations, it can be dropped altogether:

Obviously, if it has seats for more than 10,000 people, it can be said to have seats for 10,000 people. We can cut out two words. Also, the journalist in me loves precision, and would prefer an exact figure:

She's so pretty you can be sure that every boy in the class wants to talk to her.

I was so angry that I broke my rule.

It rained so hard that we gave up trying to stay dry.

Think carefully if this word is needed. Here it isn't:

Of all the fruits, my personal favorite is pineapple.

While we're at it, I'd also change personal favorite to favorite. By definition, favorites are personal.

Think about ditching this word in situations like these:

Your excellent training provided opportunities that helped me to fully realize my potential.

The coach helped her to improve her tennis.

Take a look at this, and you'll see why which can often be dropped:

The aim of the farm is to give urban residents a taste of rural life and the satisfaction of nurturing something which they can later eat.

Many editors regard an abundance of superfluous words as evidence of poor writing and a lack of professionalism. For your own sake, pay attention to this issue before submitting any articles to paying publications. Of course, tackling verbiage is just one facet of editing; this ebook is a comprehensive guide to every aspect of the process. 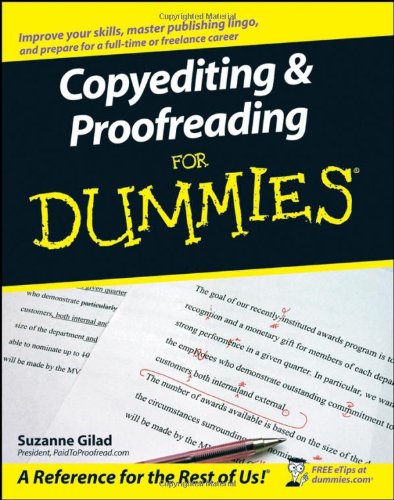 Copyediting and Proofreading For Dummies Amazon Price: $19.99 $10.88 Buy Now(price as of Aug 5, 2014)
Commonsense advice useful for people in the media, advertising, marketing and other fields.
Next >> How Does Working from Home Affect your Social Life?