In the fourth episode of the first season of Shark Tank five business ideas were presented. Out of the five businesses presented only two were able to walk away with an investment from the Sharks.

KwameKuadey has created a solution for unused gift cards. He is seeking an investment of $150,000 in exchange for 30% equity in his business.

Kwame realized that of the $80 billion of gift cards sold about 10% or $8 billion worth go unused. So he started a website that buys gift cards that people do not want and resells them to people who do want them, at a discount.

Kwame immediately peaks the interest of most of the investors, especially O'Leary and Herjavec. Herjavec wants to know about the sales of the company, while O'Leary wants to get an understanding of the business model.

He really impresses the investors with the way that he answers their questions and comes across as a guy who knows his business.

As usual, the investors attack the valuation of the company. They think that the company is overvalued. Kwame reveals that his valuation is based on sales potential, interest from Amazon, and what he brings to the company.

Barbara decides not to invest in the company because she does not think she is the right partner. Daymond, who admits that he likes the business, is out because this is not the type of business for him. Haggerty bows out because he thinks that the business is too risky at this point.

Ultimately, Kwame agrees to the offer made by O'Leary and Robert.

Gina Cotroneo has started a company Soul's Calling. The produces and sells a line of products that promotes happiness. She is seeking in investment of $150,000 for 25% of her company.

The company was inspired after Cotroneo experienced a sexual assault. The news of her attack spread quickly throughout her city. Cotroneo believed that if the negative energy of her attack could spread so fast from one event, then maybe she could create something that could spread positive energy.

With that Cotroneo started to create several products that promote happiness and positivity. She features a couple of her products to the Sharks including an umbrella that has positive sayings on it, a connection band, and beach sandals that allow you to leave positive messages in the sand.

O'Leary implies that she should stop the business because it is not making any money. All of the Sharks are not convinced that this is a business. O'Leary, Haggerty, Daymond, and Barbara all decide not to invest. Barbara contends that she does not see this as a business, but rather a ministry.

Robert Herjevec, who is trying to be very respectful, tells Cotroneo that he believes that she does have a business but that she needs to adapt and change what she is doing.

Dan Claffey has created a company call Coffee Branded Gifts. The company sells a line of coffee themed products. Dan is seeking an investment of $300,000 in exchange for 40% of the company.

Dan started the company after attending a coffee trade show. He realized that there were a few people distributing any types of novelty products with a coffee theme. After the trade show Dan decided to trademark different names like "Coffee", "Cappuccino", and "Latte".

After the presentation all of the investors recognize that he is the only person in the USA who can make products with word Coffee on it. However, the investors want to know if he has any sales. O'Leary, who was obviously starting to get irritated by all of the market statistics Claffey was mentioning, bluntly asked,"Are there any sales for this crap?"

Claffey responded that he does not have any sales because he want to have the capital in place to produce and deliver the products. Once he said this all of the Sharks were in a frenzy at this point. All of the Sharks agreed that he should try to have orders in places before he looks for any type of funding.

One by one all the Sharks bowed out. But most of them could not bow out without letting Claffey have it. In response to Claffey's ability to recite market statistics and surveys, Barbara stated that he should be in research business since he seems to be so good it. O'Leary went as far as to say that Claffey has wasted his time.

Paul Watts of Sacramento, California has created a mobile graffiti removal service that he wants to franchise. The name of the company is Graffitti Removal Services or GRS. He is seeking an investment of $350,000 in exchange for 15% equity in the company.

Watts, who initially worked as a facilities manager, started the business after volunteering to remove graffitti around his city. After seeing the response of the community during the volunteer effort, Watts set out to create a company that would provide a benefit communities and make some part-time income. It eventually grew into a full-time business.

During the pitch Watts kept mentioning this proprietary spray that his used to remove the graffiti which he demonstrated. All of the Sharks, seeing an opportunity with this spray, ask Watts about the proprietary rights of the graffitti removal spray that he uses. Watts obviously disappoints the Sharks when he reveals that he does not own the rights to the spray.

When asked about the sales of his own location he mentions that he has generated about $230,000 in revenue of which he netted about $75,000. They then ask Watts about the cost of franchising with his company. He states that it would cost someone a minimum of $60,000 to start a franchise with GRS.

O'Leary then attacks the valuation of company. Watts, based on his 15% equity offer for $350,000, is valuing is company at a little over $2 million. Watts asks O'Leary what he thinks is a fair offer for the company. O'Leary contends that he should get 110% of the company for $350,000.

Haggerty does not think the franchise model will work for this business and is out. Barbara thinks that franchisors will have a hard time getting government contracts and bows out. Daymond decides not to invest because the business has nothing that is proprietary.

Robert Herjavec offers Watts $350,000 for 75% of the company. O'Leary decide to partner with Herjavec in the deal. This deals essentially makes Watts an employee. Watts, without much hesitation, rejects the offer stating that deal is a "Shark" deal. After a heated debate ensued between Watts and O'Leary, Watts stood firm with his decision.

Amy Feldman and Allison Costa have developed a slipcover for baby play yards called Coverplay. They are seeking an investment of $350,000 for 15% of the company.

Amy and Allison begin by demonstrating that traditional play yards, which babies throw up and waste food in, are not easy to clean. Then they present their solution, Coverplay, which is a removable slipcover for play yards that can be washed and reused again.

The investors seem to be impressed. Amy and Allison go on to mention that they have recently launched their product in a major retailers. They also have revealed that the idea is patented.

The investors, who are clearly interested, want to know what their sales are for the company. According to ladies, they have done over $200,000 in sales. When asked to specify who they mainly sell to, they mention that they distribute to retailers, hotels, and cruise lines. They also reveal that they are getting reorders for their product.

Daymond, who feels like the ladies have everything that they need, wants to know why they need an investment. Allison and Amy say that they need the money for marketing. They mention that while they are getting sales no one is going into a retailer asking for a Coverplay.

Kevin Haggerty contends that the business is too niche and for that reason he decides not to make an investment.

Allison and Amy step out of the tank to discuss the offers. They cannot get around the idea of giving up controlling interest in their company. They decide to make a counter-offer to Barbara and ask her if she would lower her equity percentage for the company and take a percentage of the patent. This counter comes as a shock to all of the investors because they thought that the patent was included in the business.

After Allison and Amy have the patent issue under control the investors resume their bidding. At this point, Barbara's offer is the same, while Robert, Kevin O'Leary, and Daymond have modified their offer to 51% for $350,000.

Ultimately, Allison and Amy decide to partner with Barbara mainly because they did not want to give up controlling interest in the company.

Part of the CoverPlay Pitch

Wrap-Up Of Episode 4 of Season 1

In the episode there were two ideas that really stood out. Both of the businesses have the potential to become huge.

Gift Card Rescue - Gift cards is a huge market and unfortunately a lot of gift cards go unused for many different reasons. This business definitely solves a problem.

Cover Play - Mothers will do anything to protect their children. This is especially true for germs. The Cover Play concept is a solution that helps mothers do this.

Coffee Brand Gifts - All this guy had was research and no sales. Like the investors, I do not really see people buying products just because it say coffee on it.

"I wanted to fire him and he doesn't he work for me." -Kevin O'Leary 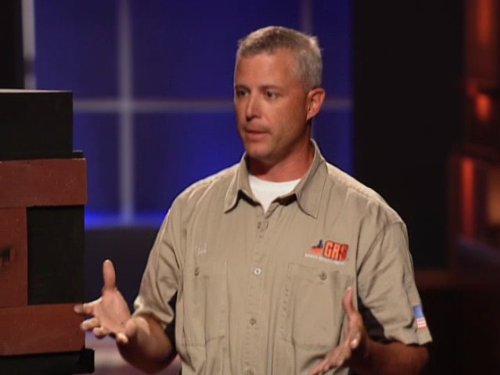 Here are more articles that you may enjoy about the Shark Tank TV show.